Stylish, affordable and reliable, the Mk2 Audi TT makes a strong case for itself secondhand

had big plans to improve the handling and dynamics of the TT. Out went the

platform and some of the intricate detailing of the first generation car and in came a more bespoke aluminium and steel Audi Space Frame for the 2006 TT based on the VW Group A5 PQ35 platform. Always a very capable all-rounder, the 8J TT offered a much more involving drive, as well as being very easy to live with and use daily. 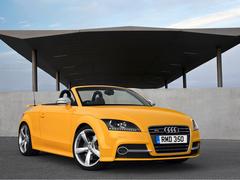 The 1.8 turbo petrol engine most commonly used in the Mk1 TT gave way to the VW Group's 2.0-litre TFSI unit, as found in the Golf GTI. This engine offered 200hp for 0-62mph in 6.4 seconds and a top speed of 150mph. For those seeking more performance, the 3.2-litre V6 was carried over from the first TT with 250hp to give 0-62mph in 5.7 seconds and an electronically capped 155mph top speed.

The V6 model always had quattro all-wheel drive, while the 2.0-litre turbo petrol was front-drive as standard. Six-speed manual gearboxes were standard for both or could be swapped for Audi's S tronic dual-clutch transmission.

Eight months after the TT Coupe went on sale in the UK, the Roadster arrived at the tail end of 2006 with the same engine and transmission options as the Coupe. Shortly after that, the all-wheel drive 272hp TTS arrived to give the Coupe version a 155mph top speed and 0-62mph in 5.4 seconds, while the Roadster was only fractionally slower. All TTS models were fitted with Audi's adaptive magnetic damping system. 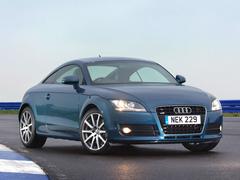 Close on the heels of the TTS was the arrival of the 170hp 2.0-litre turbodiesel to give the TT broader appeal in the company car market. However, the model TT fans had been waiting for broke cover in early 2009 with the RS version, packing a 340hp 2.5-litre turbocharged five-cylinder motor capable of propelling the TT RS from 0-62mph in 4.4 seconds and 174mph if the first owner opted for the raised speed limit.

The e1.8 TFSI engine was only ever available with front-wheel drive and 160hp, while a mild update to the whole TT range in April 2010 introduced LED daytime running lights as standard for S line models, more power for the 2.0 TFSI engine to give 211hp, and the option of a Sport button for all non-RS models. Audi's final flourish with the second generation TT was the RS Plus, which upped engine power to 360hp in early 2012.

With prices for second generation TTs starting from £6,000, they are an affordable way into German coupe or open-top ownership. For the TTS, expect to pay from £12,000, while an RS will command upwards of £19,000.

PHer's view:
"My TTS was the best car I've owned and it was only sold because we needed an estate car when our first child arrived. I'll definitely have another one."
Peter Smith