Sharp looks, 510hp supercharged V8 and yours for less than £20K - how to land yourself a British super saloon hero

While the Germans were bickering among themselves about who had the most powerful super saloon, Jaguar took the very British approach. Rather than bragging, it just got on with the job of delivering a stupendously good rival to the RS, M and AMG models from its key competitors. 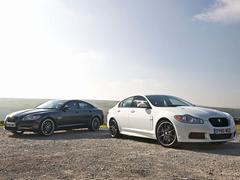 It helped that Jag had considerable form with supercharging, the new X250-based XFR's 5.0-litre V8 gaining an Eaton Twin Vortex blower. It was enough to boost power to 510hp and see the Brit from 0-62mph in 4.8 seconds and on to a limited 155mph.

If those figures weren't enough to impress fans of the German trio, the Jaguar's mid-range performance was often enough to settle any arguments. With 461lb ft of torque from just 2,500rpm and a flat plateau of shove all the way to 5,500rpm, the XFR's party piece is effortless in-gear acceleration.

It also happens to be very handy in the corners too, despite an all-up weight of 1,891kg. To help keep the power doing its best to propel the car forwards, Jaguar used an electronic limited-slip differential for the first time in its history in the XFR. A six-speed automatic gearbox was also standard with steering wheel paddle shifters, and Jag also equipped the R with 30 per cent stiffer springs over the standard XF. From the outside, 20-inch alloy wheels and four exhaust tailpipes were the obvious changes, though there were more subtle additional vents and larger front air intakes. 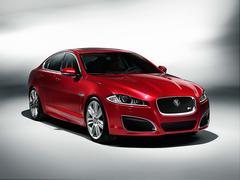 In 2011, Jaguar facelifted the entire XF range and these later models are easy to spot as they have a smoother headlight style. The same year, the XFR100 limited edition arrived with Draco alloy wheels, but 2013 will be the year enthusiasts will be more interested in as this is when the £2,750 Speed Pack was introduced to raise top speed to 174mph. This option also included a new front splitter and rear wing for greater stability.

Quickest of the lot is the 2013 XFR-S, equipped with a new eight-speed auto transmission and 550hp motor. It cut the 0-62mph to 4.4 seconds and raised top speed to 186mph. You could also order the R-S as a Sportbrake estate to make it an even more understated Q-car.

If you want a last of the line XFR-S, you'll need to budget £60,000 for a low miles saloon or wagon. At the other end of the scale, early Rs now come up for £16,000, but we'd look more at £20,000 as starting money for an average miles, well cared for example. Seek one of these out and you'll have a true gentleman's express.

PHer's view:
"Putting the fuel economy to one side, it is a great all-rounder. I change cars regularly, and never have the same model in succession, but at the moment the only replacement that I can think of for this is an XFR-S Sportbrake, and currently the price differential is too great for me to justify changing."
James Tillyard