Who wouldn't be tempted? Here's what to look out for if you're in the market...

Thanks to Phil James for lending us his car to photograph for this guide (Pics: Steve Hall)

The tangled spaghetti of Lamborghini's history saw the

first developed under the Mimram brothers. They commissioned Marcello Gandini to style the car, but it was Chrysler's 1987-on stewardship that provided the cash to bring the Diablo to the Hotel de Paris in Monte Carlo for its launch in 1990. The spectacular machine arrived with a breathtaking 202mph top speed, and the ability to cover 0-62mph in 3.9 seconds - crushing performance figures that varied only slightly throughout its 11-year production life. 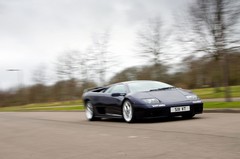 The V12 engine, with a history tracing back to the Miura, was still the heart of the

. It arrived in 5.7-litre form with 492bhp and grew to 6.0-litres, with power peaking at 595bhp in the limited-run Jota. There were numerous revisions and upgrades to the engine and transmission throughout the Diablo's life, as well as styling changes. The most notable styling revision was the switch from pop-up to fixed headlights with the arrival of the second generation VT in 1999, making the earlier Diablo the last car on sale with pop-up headlights before legislation caused their demise.

Lamborghini's sometimes turbulent ownership history entered calmer water in 1998 when Audi acquired the Italian firm from short-term custodians Megatech. It set about improving quality and making the most of the Diablo before it was replaced by the Murcielago in 2001. 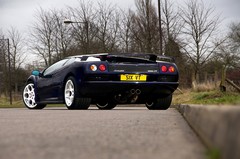 Diablo ownership is not for the uninitiated, as there are a plethora of different models, rear- and four-wheel drive and special editions, even though overall production didn't top 3000. In fact it's reckoned just 2884 Diablos of all types were made, breaking down

Click the section links below to find out more: