The E55 AMG had the muscle to take on genuine sports cars. Now it's a serious performance bargain

Back when 400hp seemed like an awful lot of power for a saloon car, Mercedes upped the ante by a big margin with its E55 AMG. The muscular four-door packed the same 476hp supercharged 5.4-litre V8 motor as the SL55 drop-top and created a saloon or estate that could crack 0-60mph in 4.6 seconds - identical to the 997 Porsche 911 Carrera of the time.

Top speed was buffered at 155mph, but that was easily circumnavigated and 180mph was reckoned to be within reach, which left AMG's brute just a couple of miles an hour down on Stuttgart's more focused sports car. For a five-seat family car to keep up with an entry-level 911 was impressive, but that it was priced at an almost identical level made it an even more compelling package.

Despite coming with all that talent, Mercedes stuck with its policy of the time of making its AMG models very hard to distinguish from the mainstream versions they were based on. You had to look hard to spot the four tailpipes and subtle 'V8 Kompressor' badges on the front wings, because otherwise, it looked largely like a regular E-Class.

Step inside and it was equally low-key, even if Merc had raided the options list of just about every conceivable extra to cram into the E55. As a result, this AMG came with heated leather seats, CD autochanger, Harmon/Kardon stereo and Dynamic seats with active bolsters that inflate automatically as you corner to keep the front occupants held in place.

Appealing as all this was (assuming it's in working order) it's what's under the bonnet that makes the E55 special. The supercharged 5.4-litre V8 came with colossal torque, which not only helped acceleration off the line but made the E55 a formidable point-to-point machine. And it was no crude dragster as AMG had worked its magic on the suspension by tuning the air springs to resist body roll better than the in other W211 E-Class models. Still, the E-Class rode the bumps with more supple control than an Audi RS6 and, like this rival, the AMG was available in saloon and estate forms. So the dogs could come along, too.

Early cars have been known to rust around the wheelarches, but most E55s have led charmed lives so you should avoid anything that's not perfectly straight and clean. From 2004 onwards, Mercedes got on top of its troubles with tin worm, so any later E55 should be completely solid.

You'll also find plenty of E55s that have been modified in some way. This is not necessarily your cue to run for the hills so long as the work has been carried out by a recognised tuner and there are receipts to back up the seller's claims. It's relatively easy to free up 600hp from the 5.4-litre engine with an exhaust, supercharger pulley kit and remap. With that sort of power, there are W211 E55s capable of 200mph. The brake by wire SBC (Sensotronic Brake Control) system is up to the job, though some find the pedal doesn't have the feel and progression of earlier AMG models.

Actually finding an E55 AMG may well be your biggest problem with the car. There are only ever a handful for sale at any time, so it's worth making friends with specialists and forums to find out when good cars do come up. Stick to the classifieds and W211 E55s start at £8,000 for early saloons. Budget £12,000 for a good saloon or estate with average miles, while the best examples of either will nudge towards £20,000 as the car is now gaining classic status. 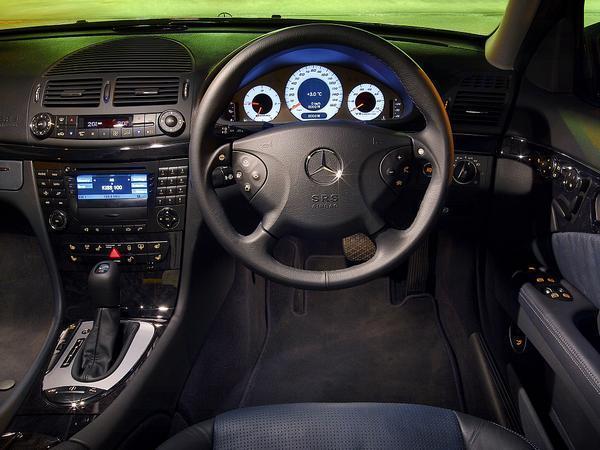 Bodywork and interior
Cars made from 2004-on have better corrosion protection, but it's still worth looking for rust around the wheelarches.
The sat-nav and infotainment screen is outdated by modern standards and is also prone to failure. It's expensive to fix, so many owners just live without it.

Engine and transmission
Higher mileage cars can suffer from crankshaft position sensor failure, which can force the computer to prevent engine running.
The seal around the oil level sensor can also perish and lead to minor oil leaks if not addressed.
Intercooler pumps can fail, requiring replacement
Gearbox cooler pipes can corrode where they join the radiator.

Suspension and steering
E55's come with Airmatic suspension, so make sure it works by changing the suspension settings several times during a test drive.
If there is an issue, it could be related to a leak or failure of the pump itself.

Wheels, tyres and brakes
Replacement discs and pads are quite reasonable from specialists at around £450 for a full set of discs and pads. However, if the fluid has to be changed it requires the car being connected to a computer with the relevant software because of the SBC (Sensotronic Brake Control) pump.
The SBC pump has a service life and costs around £1600 to replace. It can be rebuilt, though, for around £400 by Sinspeed.
A set of four tyres will cost around £800.