Access the PH community knowledge bank before taking the plunge...

Introduction
The 993 version of the Porsche 911 is now noted for being the last of the air-cooled 911s, and for many that’s enough to make it the last of the true 911s. Regardless of your position on Porsche engine cooling, the Tony Hatter-styled 993 is rightfully lauded as one of the best cars to come out of Zuffenhausen. 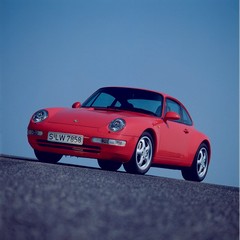 Launched in late 1993, the 993 arrived as the 911 Carrera 2 with a 272bhp 3.6-litre M64 flat-six engine and was initially only on offer with rear-wheel drive and a coupe body. The smoothed-off lines were not the only major upgrade over the previous 964 model. Porsche introduced a new multi-link rear suspension that finally tamed the 911’s eagerness for oversteer.

Not long after the coupe made its debut, the Cabriolet arrived in March 1994 with a fabric roof and plastic rear window. In August ’94, the Carrera 4 joined the line-up with a much revised all-wheel drive system that was half the weight of the 964’s. This model also featured Porsche’s ABD (automatic brake differential) for improved traction. At the same time, Porsche also introduced its four-speed Tiptronic automatic transmission as an alternative to the standard six-speed manual gearbox.

Early 1995 proved a busy time for the 993 range as Porsche introduced Varioram for the first time on the lightweight RS model. With 300bhp, the RS was not the most powerful 993 to be made, but only 1014 of all 993 RS types were made of this model that was 100kg lighter than the Carrera 2. With its stripped interior, including fabric door pulls, lightweight door cards, racing seats and carpet where the rear seats would normally fit, the RS covered 0-60mph in 5.0 seconds to the standard car’s 5.6 seconds. Top speed also went up from the basic 993’s 168mph to 172mph, while a large fixed rear wing and additional front spoilers helped reduce aerodynamic lift.

A Club Sport version of the RS was also offered by Porsche and was known as the RSR in the UK. It’s identifiable by its bi-plane rear wing and even more Spartan interior. The RSR was aimed at track use but could be road registered. 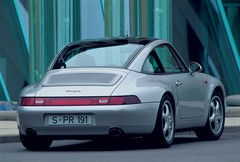 At the same time as the RS was launched, Porsche also introduced the Turbo, which went on to sell 5978 out of a total production run for the 993 of 68,029. It covered 0-60mph in 4.5 seconds thanks to 408bhp at 5750rpm and achieved a 180mph top speed. Porsche later introduced the Exclusive power pack that upped the Turbo’s power to 430bhp, with such cars being labelled the Turbo S in the North American markets.

The GT2 was also unveiled at the same time as the Turbo and RS, packing 450bhp. Some 110 race cars were made in this form, with a further 57 road legal GT2s built with a 430bhp version of the twin-turbo engine. Unlike the Turbo that has four-wheel drive, the GT2 stuck with rear-drive and only seven right-hand drive road cars were ever made. Another 21 GT2 Evo models also found their way onto the public roads in 1998.

Towards the end of 1995, Porsche introduced the Targa with a sliding glass roof and went on to sell 4583 Targas around the world. The Targa was only ever built with the Varioram version of the 3.6-litre normally aspirated engine that was also fitted to the coupe and Cabriolet models for the 1996 model year. Varioram upped power to 285bhp at 6100rpm and improved torque to 251lb ft at 5250rpm. With the improvement in mid- and high range power, the Carrera 2 now covered 0-62mph in 5.4 seconds and top speed nudged up to 171mph.

Alongside the Targa, Porsche launched the Carrera 4S, which was a Turbo bodyshell with Turbo suspension and brakes but a standard Carrera 3.6-litre engine. A year later in September 1996, the two-wheel drive Carrera was given the same treatment to create the Carrera S, but this model did without the Turbo’s brakes and suspension.

One more year down the line in September 1997, the mainstay 993 models were replaced by the new water-cooled 996 model. The 993’s air-cooled engine simply wasn’t able to pass European Union noise and emissions regulations, but the Turbo and Carrera s and 4S models continued to fly the air-cooled flag until the middle of 1998.

(Editor's note: We hope this new Porsche 911 'knowledge bank' will attract contributions from current and past owners, and anyone who knows these cars well. If you have something to say that will help fellow PHers, please add your comments to the forum thread in the relevant section below.

We'd also love to illustrate this guide with photos of PHers' own cars, so please email contributions to PHnews@pistonheads.com - we're looking for images cars from all angles, as well as 'detail' shots that may help to illustrate specific items discussed in these pages. Thanks, folks!)

Adrian Flux has supported this feature