We explore the pleasures and pitfalls of last-gen Rangie ownership

finally went into orbit with the arrival of the third generation model L322 in February 2002. Where previous Range Rovers mixed off-road ability with comfort, the L322 pushed comfort and luxury to the fore, though it also retained the full spread of off-road ability expected of a Range Rover.

This was also the first Range Rover model to ditch a separate chassis, instead using a monocoque design that heralded a shift in Land Rover’s thinking. The L322 also ushered in a new style for Land Rover, penned by Don Wyatt, that we can still see the effects of today in the L322’s replacement, the L405. As such, the L322 now competed against luxury saloons such as the Mercedes S-Class, as well as other SUVs, which is why the car has become beloved by so many for its dual-purpose ability.

Longer, wider and taller than the P38A it replaced, the L322 has a 2880mm wheelbase, generous cabin space and comes with permanent four-wheel drive in all models. There's also an automatic transmissions for every version, initially a five-speed ’box that was then superseded by a six-speeder for the 2006 model year, with an eight-speed auto for the diesel from 2010.

To begin with, Range Rovers came with BMW-sourced engines in the shape of a 184PS 2.9-litre TD6 turbodiesel and 4.4-litre V8 petrol with 290hp. These engines lasted until the 2006 model year when the V8 was replaced with a Jaguar-derived 4.4-litre V8 with 306hp, while the flagship was now powered by a supercharged 4.2 V8 developing 400hp. A new 3.6-litre TDV8 took over from the TD6 and offered 272hp and a heft 640Nm of torque. 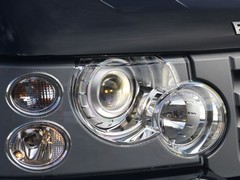 In April 2009, the supercharged V8 grew to 5.0-litres and 510hp yet offered slightly better fuel economy of 19.0mpg and lower 348g/km carbon dioxide emissions. A year later, the 3.6 TDV8 engine was replaced by the 4.4-litre unit with parallel sequential turbocharging to deliver 313hp, 516lbft and 30.1mpg - making it the first factory Range Rover to exceed 30mpg. Land Rover also took the opportunity to fit the new eight-speed auto to the TDV8 and restyle the front end with daytime running lights that curve around the headlights. Improvements to the Terrain Response system were also introduced, with the addition of Hill Start Assist and Gradient Acceleration Control.

There’s a choice of HSE, Vogue, Vogue SE and Autobiography versions of the L322 Range Rover, which go from luxurious to downright sumptuous. There is also a wide variety of prices, going from £6000 for early, high mileage cars all the way to £80,000 for one of the last L322s before the L405 took over at the start of 2013. You can also spend even more on tuned models from the likes of Overfinch or Kahn, while armour-plated models command yet more based on their level of protection. However, we’ll stick with the standard models here that so many PHers use for a huge number of roles and reasons.

Owners Note:
"The best analogy I’ve ever heard for the ownership of a RR is: Ownership is a lot like being a drug addict. When you’re on a high, everything in the world is great but it takes more drugs/money each time to get that same high."
Dave Brennan