The second generation X84 Renault Megane may have been launched as shakin' its ass, but the original Renaultsport Megane hot hatch version was very far from kickin' ass. It was something of a disappointment to begin with, though its 225hp 2.0-litre turbo petrol engine offered 0-62mph in 6.5 seconds and a 147mph top speed for a reasonable £18,600 when it touched down in the UK in 2005. It was also offered in both three- and five-door shapes to give buyers an alternative to the Golf GTI. 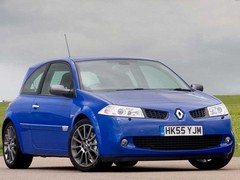 Story started with the 225, which spawned...

, the French firm responded with the Trophy model. This strictly limited edition model only came in three-door Sport Hatch form and used the same 1,998cc engine. However, revised suspension and electric power steering settings transformed the softly-softly feel of the standard car into something much more alluring. It also featured improved brakes. Only 160 Trophy models made it the UK, all painted in Nimbus Grey.

However, Renaultsport fans were not denied these benefits for long as they were incorporated into the Cup version that pitched up in mid-2005. As with all Cup models from Renault, this Megane was stripped of luxuries and focused on handling and performance. 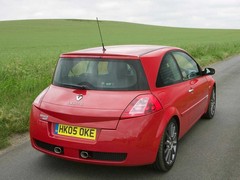 Renault still wasn't done laying the ghost of the early

to rest and the 2006 F1 Team Special Edition was launched to mark the company's success in the Formula One Constructors' Championship. With further revisions to the suspension and steering, this model also has Recaro front seats and ushered in a facelift most easily identified by a front bumper that incorporates the foglights into the curve of the lower grille rather than having them stuck pod-like on the outer edges of the bumper.

The French firm then surprised us with the 230hp F1 R26, which had a limited-slip differential as standard. Again, there were more refinements to the suspension, while a new exhaust gave a more satisfying sound under acceleration. Lux versions of this model came with leather upholstery and Renault's not always reliable keyless entry and ignition system. 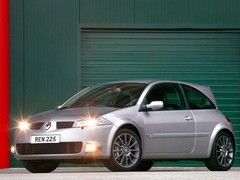 Trophy was the first of several special versions

For those more concerned with running costs, Renault also offered a diesel-powered Renaultsport Megane from 2007 with 175hp 2.0-litre turbodiesel motor. It gives 0-62mph in 8.3 seconds, 137mph and 43.5mpg.

A last hurrah was offered in the shape of the R26.R that shed 123kg from the standard three-door's kerb weight by ditching the rear seats in favour of an optional half roll cage. It also did away with air conditioning, passenger and curtain airbags, stereo, much of the sound proofing, rear wiper and front fog lights. A carbon fibre bonnet saved more weight, as did a polycarbonate rear screen and side windows. Carbon fibre was also used to make the front seats, while six-point Sabelt harnesses hold the driver and passenger in place. Revised suspension, grooved disc brakes and new alloys with the option of Toyo Proxes R888 tyres completed the R26.R's specification. Renaultsport produced 450 of these special Meganes, with the UK allocated 230. Each R26.R cost £22,990. Production of the X84 Renaultsport Megane ceased in 2009.

The hardcore R26.R will set you back from around £15,000 as it is now highly collectable, but other Renaultsport Megane models can be picked up from £2,500 for an early car with tax and ticket. Look for a Cup and expect to pay from £4,000.

PHer's view:
"I was keen when the car was first announced but put off by negative press. Glad I waited until the Cup model was launched as it was a great car for every type of driving - even went to the Nurburgring and didn't embarrass myself. Depreciation was a bit alarming, though, and build quality was flaky in places."
Rich Wight