Launched in 2008, and clearly derived from the Iroc concept shown a couple of years previously, the 3rd generation Scirocco continued the formula of its predecessors by offering a four-seat coupe based on Golf underpinnings. 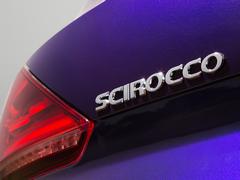 In this case, it was the Golf Mk5, which was a good place to start. For this coupe, VW made the front and rear tracks a little wider, whilst leaving the standard suspension set-up much the same, so a sporty feel was guaranteed. Buyers could opt for the Dynamic Chassis Control (DCC) that offered a choice of Comfort, Normal and Sport settings for the suspension.

From launch, VW fitted the Scirocco with a choice of 1.4- and 2.0-litre turbo petrol engines taken from the Golf range, giving buyers power ranging from 120 to 200hp. Few bothered with the 120hp unit, but the 160hp 1.4 TSI proved popular with those who valued style over performance. For anyone who wanted more of the latter, the GTI-sourced turbo petrol was the one to have, and its power increased to 210hp at the end of 2009.

If that wasn't enough to satisfy you, Volkswagen launched the Scirocco R in 2009 with a 265hp 2.0-litre turbo petrol motor. An XDS electronic differential helped get that power to the road through the front wheels and there was lowered suspension too. As well as the unique body kit, the R came with DCC as standard. 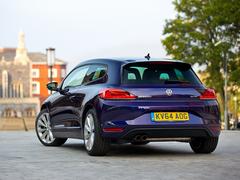 Diesel power was on offer almost from the beginning of the Scirocco's life with 140- and 170hp units. If you need to cover plenty of miles, these are the ones to look at, especially the more powerful of the two for its blend of strong overtaking force and economy.

We, however, will concentrate more on the 2.0-litre turbo petrol and R models, as they hold the greatest interest for us. The 2.0-litre model offers 0-62mph in 6.2 seconds, while the R requires just 5.8. Top speed for the R is 155mph, 10mph more than its 200hp sister model.

A mild facelift in 2014 introduced a revised front bumper with aero blades on the edges, while new indicators and daytime running lights arrived at the same time. The R received new Cadiz alloy wheels, and the engine line-up was rejigged to better reflect VW's, but not much changed and Scirocco sales slowed to a trickle before the axe fell earlier this year.

PHer's view:
"Frankly I love it, which is not to say that it's without foibles. As a driving machine in either of the two modes it enjoys - pootling or on a razz - it is quite brilliant. The look of the car is still very pretty, even though it is now an old design."
Simon Phillips