On road and track in the two hot hatches of the moment - which is best? [updated pics] 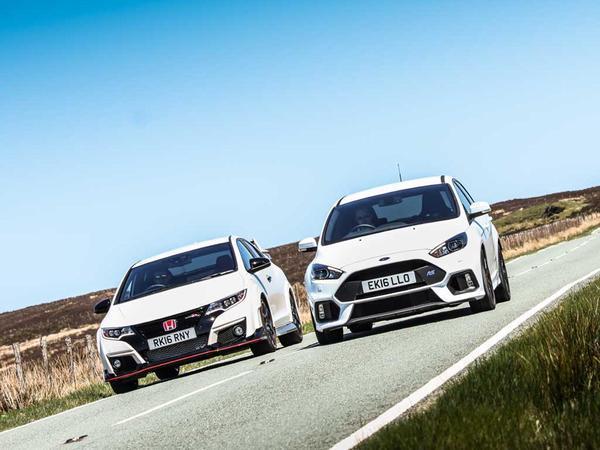 Despite their established positions in the hot hatch firmament, the

have never before occupied such close territory. Back in the early 2000s, affordable VTEC thrills played rally car for the road technology; the Civic was battling fast Leons and Clios, the Focus a more serious proposition to rival cars like the Subaru Impreza. At the end of the decade the gulf was even wider, the Focus RS up to £25K, five cylinders and 300hp, the Civic still comfortably under £20K and a smidge less than 200hp. 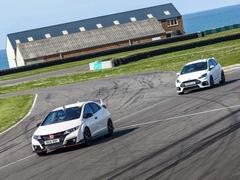 In 2016 though, the two could hardly be better placed to compete for hot hatch superiority. Both around £30,000, both producing more than 300hp and both with a host of technology to make them faster than many supercars from not so long ago. Neither is especially modest when it comes to advertising the fact either; if you want unassuming performance, go get a

. But if you want entertainment, the choice is between these two. So which is the most fun? We had a weekend in Wales to find out. Because, y'know, someone had to.

There's only one place to start when Saturday dawns bright and breezy. Sure, the latest fast Focus may not be as outlandish as its predecessors, particularly in white, but there's too much anticipation around this RS to ignore it. Camera gear loaded and route planned, the RS's key is the one in demand. 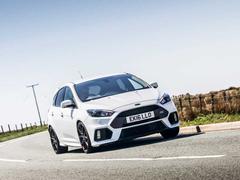 Focus is mighty on the road

Jump in, grab the wheel, go for seat adjuster. Oh. It doesn't move. The optional Recaro seats are mounted far too high, perching you up in the cabin and making the angle with which you operate the pedals feel very peculiar. You get used to it, and the seats are very good, but it shouldn't be an issue in the first instance.

With familiarity from the Civic long-termer, there are interesting points of comparison straight away. The steering isn't quite as direct and the gearbox can't compete for slickness either, but then not much can. The Focus very soon starts to claw back ground though. Like all the best fast Fords it just works with British tarmac so well. More than that, it's engaging and accommodating at road speeds. You don't need to be a superstar to be entertained, but there's also plentiful ability in the Focus should you want to push. 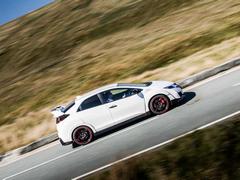 +R mode possibly a bit much for UK roads

Of course, the RS has a set of dynamics never seen in the hot hatch segment before. This makes it tremendous fun on the road, and not in some wild drift extravaganza sense either. It has sufficient mobility - more than the Civic certainly - to be braked hard into a corner and enjoy the sense of the nose nudging in. And then cannon out the other side, throttle pinned. Alternatively, peg your entry speed back and use the throttle to straighten the car to corner exit, again a sensation alien to its Haldex-derived (and rather dull by comparison) rivals.

In fact, you'll be having such a blast stringing corners together any which way you want that the engine won't have registered. While far from bad, it certainly doesn't stand out like other elements in the package. It's torquey and less laggy than the Civic, but lacks the Type R's vigour at high revs and the induction noise won't be to all tastes. Ignore the 0-62mph times as well; once up and running these cars are very close in performance. Which is really bloomin' fast. 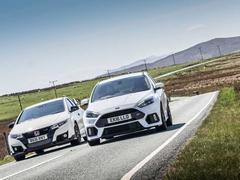 The Focus makes a convincing first impression then, but certainly not an overwhelming one. Over the same stretch of Welsh B-road, there's no escaping that the Civic - sorry fast Ford fans - is simply the more exciting car.

Weight has to play a significant part. It becomes more of an issue on track, but the fact that the Civic is carrying at least 125kg less than the Focus can be felt everywhere. It feels more accelerative, it brakes more effectively and it turns in more sharply. The whole car feels more alive and eager than the Focus; the Ford is undoubtedly playful, but the Honda is thrilling to a point the RS can't quite match.

Sure, it isn't possible to replicate the Ford's antics out of corners. However, the Type R brings its own tricks, with huge mid-corner confidence and superb traction for a front-wheel drive car. It feels planted without being locked down and boring, even if the +R damper mode feels too much on the road.

As mentioned in the Megane and Civic comparison, the Type R doesn't quite have the fluency of the best hot hatches on bumpy roads. It is exciting though, sniffing out cambers and keen to deal with road imperfections as quickly as possible. It's not skittish, more a sign that it wants to be at a smooth circuit. Anglesey beckons...

Even in a paddock containing a Jaguar Project 7, numerous Caterhams and a Ferrari 458 Speciale, these two are drawing plenty of attention. Why shouldn't they? They're relevant, (reasonably) attainable and definitely not shy. 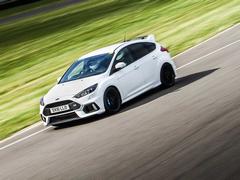 It was going well until it chewed its tyres up

The Focus is immediately at home on circuit. There's a cohesiveness to the control weights and responses that gives you confidence from the off, never having to second guess the car. It still feels fast on circuit too, even if doesn't quite rev beyond 6,000rpm as willingly as you'd hope.

Again though, it's the handling of the Focus that shines at Anglesey. It can do precise and quick, it can do lairy and it can do everything in between. You can even do some proper power oversteer out of the slower corners. In a Ford Focus! The weight undoes it eventually though. The brakes wilt sooner than the Civic's, and it uses more fuel too. Which is a pain when the trip to the filling station costs you 40 minutes of valuable track time. On the circuit it's a laugh, certainly, but has it done enough to claw back the Honda's advantage from the road? 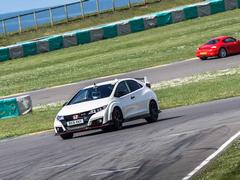 No, put simply. The Civic is fantastic at Anglesey, only undone by some Continental SportContact 6s that aren't best suited to circuit driving. Trying the Type R on the Ford's Michelin Pilot SuperSport or, indeed, its optional Cup 2s, would be very interesting.

As is, the Civic can struggle for purchase into and out of a bend. It's an odd feeling; turn-in and chassis composure are superb but the rubber seems unable to exploit them. With a less greedy approach to the throttle though the Civic is mighty - chasing every last rev with the shift lights ablaze, changing up with that fantastic gearbox and leaning on the seemingly tireless Brembo brakes.

The Focus's advantages are small but noticeable - it allows left foot braking where the Civic does not, and, of course, overspeeding rear tyres are rather more entertaining than overspeeding front ones.

It's the Honda that everyone wants to drive again though, all raving about its precision and agility. It eventually becomes the only one people can drive again, as the Focus chews through its front tyres far more rapidly.

Before dealing with these two specifically, it's worth remembering what a great time this is for hot hatch buyers. If neither the Civic nor Focus appeals, there's the

and, of course, the Megane Renaultsport to choose from as well.

Furthermore, while the runner-up in this test, there's no doubt that the Focus RS is a great car and another top class Ford hot hatch. It's been a fair while since we've had even an average one now... 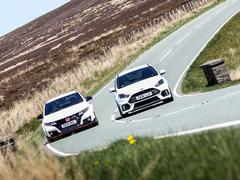 It's a very well rounded package, offering strengths in all areas and no startling deficiencies in any. The novice driver could immediately feel at home with the RS, but so a more experienced one could also be challenged. Wound back from the Race mode it was in pretty much all weekend, the Focus is probably more refined than the Civic too.

None of those are enough to take a victory from the Type R though. The conditions favoured it, and the verdict could well have been different with Wales under water (as it tends to be). On warm, dry tarmac though, be that road or track, the Civic is simply more exciting, more fun and more involving than the Focus.

The Type R's appearance will remain an insurmountable obstacle for some. But if you like the looks, or indeed can just about stand them, you will find underneath an exhilarating and absorbing hot hatch. Is it the best of the current batch? A test with the updated Megane 275 Cup-S awaits...

With thanks to BookaTrack for having us at Anglesey!