Fast, characterful and affordable S2000 is the MX-5 for grown-ups - here's how to bag a good'n!

It's easy to overlook the

, which was launched in 1999 and was on sale for a decade. Though the Porsche Boxster and BMW Z4 have attracted more buyers and the Mazda MX-5 serves those looking for something less powerful, the S2000 is car that deserves a second look. 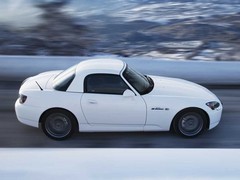 Run-out Edition 100 with the hardtop in place

s came with a 240hp 2.0-litre naturally aspirated engine that revs to 9,000rpm, offering 0-62mph in 6.2 seconds and 150mph. This was the most powerful naturally aspirated engine on power-per-litre when launched and its high-revving nature is key to its appeal as peak power doesn't arrive till 8,300rpm. For some this frenetic delivery was the reason to buy, but for others the Honda's rev-hungry motor missed the broader spread of power offered by the Porsche and BMW.

For this reason, Honda modified the S2000 in 2004 to give a little more low-down torque, though it didn't officially admit this. In the UK, all S2000s are AP1 models with the 2.0-litre engine, while the USA switched to AP2 cars with a 2.2-litre motor.

Earlier in the S2000's life, Honda modified the suspension with stiffer springs, softer anti-roll bars and new dampers to give the car more forgiving handling. This was in answer to early criticism of the S2000's snappy responses at its limit, particularly in the wet. However, much of this criticism could also be levelled at the original Bridgestone tyres that were unique to the S2000.

The 2002 revisions also saw a glass rear screen replace the plastic item of the early cars, while 2004 saw more changes to the suspension and improved bracing for the body. Wheel size also increased from 16- to 17-inches and the steering ratio was slowed by seven per cent to make the S2000 less twitchy, which all helped make the 2004 facelift model the car the S2000 should have been all along. 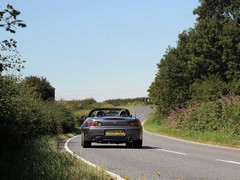 Keeping it on the boil is key to unlocking potential

The last hurrah for the S2000 in the UK was the Edition 100. Only 100 were made and all came in Grand Prix White with red leather and graphite-effect alloy wheels.

PHer's view:
It's had a few niggles along the way but everything has been so easy to fix. I do most work myself on cars and nothing has been seized or snapped or broken. It seems such a well put together car. I absolutely love it and would go as far to say best car I've owned so far.
James Pringle