Rare chance to drive the entire hot Clio bloodline back to back ... but which is best?

Opportunities to drive examples of classic models from manufacturer historic fleets are always a treat. But an entire lineage? That’s something special.

“Timewarp” condition is a phrase you’ll often hear optimistically applied to cars in the classifieds but actually applies here. Take this Clio Williams for example – it wasn’t road registered until 2006, has fewer than 3,000 miles on it and is still on its original tyres. More on that last point in due course…

Driving that isolation would be pretty cool. Driving it back to back with the #1 182 Trophy, a late-model 200 Cup and the current 200 Turbo around Brands Hatch? Heaven!

We like a hot Clio at PH Towers. Six happy months in a 197 Cup long termer inspired me to buy a 172 Cup, subsequently traded in for … a kettle. PHTV co-presenter James had a 172 Cup and also a Trophy, contributor and custodian of the PH Fleet 200 Turbo Danny ran a 182 with the Cup pack, snapper Tom Begley has just bought a perfectly acceptable 172 for just £800 and, off the back of this shoot, PH man Ben Lowden has found a 182 Trophy he’ll be picking up at the end of the week.

As we await the fruits of Renaultsport’s tweaking of the 200 Turbo and its evolution into the 220 Trophy and because Renault UK had brought them all to Brands for one of its subsidised Renaultsport track days we asked for the keys. Amazingly they handed them over.

We’ll be giving this Williams the full PH Heroes treatment very shortly so I won’t steal too much of that thunder. But of the four cars here this is the only generation of hot Clio I’ve not driven before. And, given its provenance, the most valuable by far. “Be careful,” says the PR man handing over the keys, neglecting to mention a key fact that would have informed exactly how careful I should be. 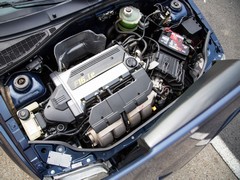 Flashes of blue liven up the grey plastic/velour inside but it very much feels its 20-odd years. Outside it’s aged better but in size and delicacy very clearly from a different age.

I trickle out of the Brands pitlane at a very deferential pace, into Paddock and – whoah! – there we are on three wheels already! Lordy. The next few laps are spent nervously getting to know a priceless car in the midst of a bustling track day. Thoughts? The engine pulls hard and has a pleasingly aggressive note higher in the rev range, the steering feels light at speed and the front end a little vague.

Tentatively I trail the brakes a little into Clearways and immediately the nose tugs towards the kerb. Paddock looms large. I brake very early and make sure I am well away from the centre pedal before pitching it in. Again that teetering sense of the inside wheel lifting. Into Druids the long-throw gearshift demands time but the Williams pivots around its length and tucks in nicely. I’m starting to enjoy myself. Boldly I trail the brakes again into Graham Hill. There’s a squeak of protest from the outside rear and I’m immediately facing the opposite direction. Ah. Shame-faced I scuttle back to the pits. “How old are those tyres?” I ask as I hand the keys back, cheeks burning with embarrassment. “Oh, they’re original to the car!”

The step from Williams to 172/182 isn’t a huge one. Sure, the Trophy feels a little more substantial inside (it’s all relative) but the dash and shoulder line feel low, the glasshouse is large and you have that same sense of being perched up high on relatively pliant suspension. Good on a B-road, slightly precarious as you peel into Paddock. 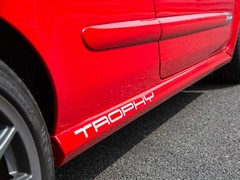 Trophy takes the prize in many eyes

Like the Williams the steering is light and not especially feelsome. Again, the five-speed gearbox feels rangey in throw and not especially welcoming of fast shifts. There’s that same sense of muscularity though; a 2.0-litre engine in a supermini weighing not much over a tonne is a healthy ratio of ccs to kgs and, like all Clio 2s, the Trophy feels excitingly over-engined. Peak torque of 147lb ft doesn’t come in until over 5,000rpm but it always feels strong, with instant pick-up from any gear and any rpm. Pile on the latter and it reveals a more aggressive top-end too. Lovely!

Like the Williams the steering mechanism up front is merely one tool for adjusting the direction of travel. It’s all on the throttle and brakes in these cars, my old 172 having a sense of built-in instability like a modern jet fighter. Great once you learned how to exploit it, bloody terrifying if you weren’t on top of it. The Trophy isn’t quite as hyperactive and pointy as that and has ABS and ESP too. The chassis settings are pretty much as per the Cup-spec 182, albeit with those trick Sachs dampers up front, 10mm less ride height and hydraulic bump stops – also seen on the current 200 Turbo.

It’s a magic combination of the raw, rough-edged charm of the Williams with a degree more sophistication and predictability. As-is it’d be a lovely thing to own, especially as a road car. Want a more track-ready one? Buy a Shed money 172 or 182, strip it, cage it, tweak it and let rip. In either case the second-gen Clio is a lovely intersection between traditional simplicity and rawness and modern civility and solidity.

I know the Clio 3 Renaultsport well, having covered 10,000 miles in a 197 Cup, a decent proportion of those on track. And unlike the Williams and 182 it’s a car that really feels built for that kind of use. 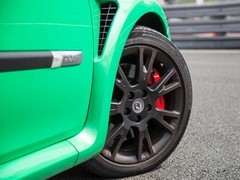 And if the step from Williams to 172/182 wasn’t that huge from 182 to 197/200 it’s massive. Core attributes remain – that sense of throttle adjustability being one of them. But this is a much, much more serious car. And more compromised on the road; this 200 Cup has 15 per cent stiffer dampers than my old 197 and that wasn’t exactly cushy. Nearly a third stiffer in springing than the ‘full fat’ 200 and with a faster steering rack too it’s a proper piece of kit. Despite not being a limited edition it’s the rarest here too, with just 429 pure Cups sold against 2,099 regular 200s.

The PerfoHub offset front struts, Brembo brakes and significantly more muscular bodywork really stand out. And mean the car is ready and willing to soak up serious track abuse straight out of the box, as proven by my old 197. It’s a much burlier car than the Clio 2 – as much as 150kg heavier -  and though the engine is a related F4R 2.0-litre it’s much more revvy and peaky than in the 182.

Paired with a close-ratio six-speed gearbox it means I’m working the higher ends of the rev range to make progress but the shifts are faster, the pedals crisper and the front end much, much more positive and informative.

I learned early on with my 197 that the ESP is quietly quite intrusive on these cars; turn it off and progress is much smoother and more predictable. Limits are so much higher that properly unsticking it takes serious provocation but it also remains biddable and playful. It’s one of those cars where the harder you push it the better it gets, rewarding skill and confidence with proper pace. Hard. Core.

We’ve written a lot about this car on PH and felt moved to defend it hard against some pretty intense criticism. In this company it feels, initially at least, very ordinary. Especially compared with its immediate predecessor. The turbo and dual-clutch gearbox you can accept as ‘progress’ but losing stuff like the offset struts, Brembos and Recaros feels like a real backward step in this environment. 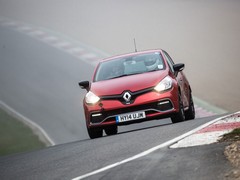 It's a very different car, but is it a worse one?

The resolutely linear power delivery, low redline and flat monotone noise do nothing to help its case against the fizzy, muscular two litres in the other cars. Occasionally sluggish paddle shifts are, to many, the final nail in the coffin. But as I chase Danny in the Alien Green 200 it’s interesting to note he’s not making any ground on me whatsoever. I’ve got 177lb ft against his 159lb ft and it’s all there from 1,750rpm rather than the mid fives, which helps. But I can also left-foot brake deep into the corners and downshift all the while, offsetting the fact the low redline means I can’t do that on the approach. You don’t feel the need for a diff necessarily but, gawd, it’d have been nice if the budget had allowed for the PerfoHub struts to reduce the torque’s influence on the front wheels. And the boggo brakes go off where the Clio 3’s Brembos remain resolute.

But it’s a hell of a lot more fun than many credit, that sense of adjustability concealed closer to the edge of the performance envelope but there if you really grab it by the scruff of the neck and fling it about. There’s hope…

So as a Renaultsport fanboy with the keys to all four cars in my hand which would I drive away in? Not the Williams. Not this one anyway. It’s lovely but, with this history, too lovely. There’s clearly a very potent little car there and one that could teach you a hell of a lot about your driving. But on two-decade old Pirelli P4000s I’m not about to push my luck.

Weirdly I’m a little unmoved by the Trophy too. Lovely as it is, it feels a little like the Williams with the appealing rough edges removed. If we’d been on the road rather than the track I’d have probably been more excited but on a circuit the 200 Cup is the undisputed boss. I know that as an ownership proposition the 200 Turbo would be a much more pleasant place to spend time; my old 197 was high 20s thirsty and a brutal daily driver.

The new one is actually just as fast and a lot more civilised but I’d live with the uncompromising nature of a 197 or 200. It’s a truly special car to push hard, a high point in the history of the hot hatch we’re unlikely ever to see the like of again. Indeed, if the lineage had missed it out and gone straight from 182 to 200 Turbo it’d almost make more sense. In every sense the Clio 3 is a stand-out car. 197 Cup with Recaros like my old long-termer please.