Full geek-out on the turbo engines, plus the obligatory passenger ride too

Let's clear up one thing from the off: the

still sounds like a flat-six. It still sounds great, in fact, so your fears can be allayed there. The top-end yowl may not be quite as intense and the occasional turbo whistle can be heard but - from the passenger seat at least - there's little to be concerned about with the noise of turbo Carreras. 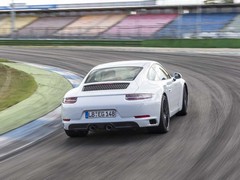 Throttle response seems very keen, the willingness to rev is absolutely there and it still makes a lot of familiar flat-six sounds throughout. Of course these impressions can't be qualified until we actually drive the Gen 2 991 but the signs from these late prototypes are very good.

The overriding impression one is of speed though, the twin-turbo torque taking both Carrera and Carrera S into very grown-up performance leagues. The punch out of corners is phenomenal (remember that torque peak is from 1,700-5,000rpm) for a base 911, to the point where a Carrera S feels feels about on par with a 997 GT3 in a straight line. They're extremely quick.

That pace comes from the new 2,981cc engine, with 370hp in the 911 Carrera and 420hp in the S. Both produce their peak at 6,500rpm but with usable power right up to the 7,500rpm cutout, says Porsche. We're also promised "a whole new form of supremacy", with "genuinely pure response" and absolutely no turbo lag. Really. As mentioned, the initial signs are good but we'll have to wait and see for a true conclusion. 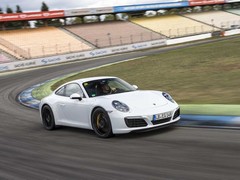 Porsche openly admits many were and remain sceptical about the adoption of turbos but maintain that by 'rightsizing' the turbos and capacity - note that definitely isn't downsizing - the best balance between efficiency, power and response has been achieved. To counter the weight of the turbos, the crankcase is lighter, as is the oil pan and pump. Cylinder wall thickness is down 40 per cent too, reducing friction and therefore improving efficiency.

Ah yes, the e-word again. You may not like the fact, but it's a key consideration for Porsche in developing its archetypal sports car now. Centrally positioned injectors improve combustion and an adjustable exhaust cam ensures a more precise charge exchange to the turbos. The stop-start will now cut out sooner, the PDK cars will coast and a new dual-mass flywheel with centrifugal pendulum means less vibration at low revs. Minicab shuffle in a 911? It's being positively encouraged!

Both transmissions - remember the manual is a modular design from the PDK - have been uprated to deal with the additional torque, with a new clutch as well as that flywheel. The ratios are tweaked (third and upwards are longer!), the oil has been changed to extend the gearbox life and even faster shift times are claimed for the PDK. How much quicker can it get? If Sport Chrono is optioned with PDK - you suspect many cars will be - the 'Sport Response Button' is fitted on the mode switch wheel button. For 20 seconds 'the drivetrain is pre-conditioned for maximum acceleration'. It's said to help overtaking. You know, when kickdown is so labourious... 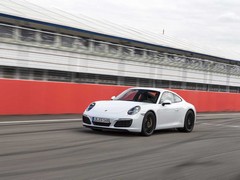 On the chassis side, probably the most notable change is the standard fitment of PASM, dropping the car by 10mm compared to a standard Gen 1 991. A PASM Sport option is also available, dropping it another 10mm. The Carrera S used for our track rides features the full roster of Porsche chassis acronyms: PDCC, PDK, PASM, PCCB, PSM (with a new PSM Sport mode) and the rear-wheel steering. The rear tyres are 305-section P Zeros. If that sounds a bit like overkill than you would be right. Porsche says it's broadening the the spread between comfort and race performance and the latter point certainly applies; there's no real sense of pitch, yaw or roll as the car romps around Hockenheim, every movement of the car ruthlessly controlled by the systems to contribute to that phenomenal speed. Porsche is only too keen to point out the the single second advantage round Hockenheim but it does seem like the 911 idiosyncrasies have been further eroded. Again, this is only from the passenger seat and perhaps we're being overly cynical but the drive should prove quite revealing. 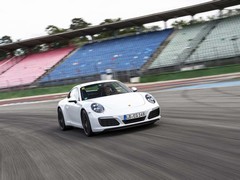 Views from the interesting seat soon!

As this is a tech preview, the updated interior should be mentioned too. It's very nice, as you might expect. Porsche Communication Management (PCM, another one for your acronym list) 4.0 now includes Apple Carplay and integration possibilities for an Android phone, Google Maps for the nav and solid state drive for storing media. There's a Porsche Connect and Porsche Car Connect app for your phone too, of course. It's a smarter display than before and appears to work seamlessly, no doubt something that will instantly impress in the showroom. That and the fancy new steering wheel, which really does look and feel excellent.

By all the objective measures than the Gen 2 Porsche 991 will be a superior car to the 911 that preceded it. Not only will it accelerate faster, stop more swiftly and corner more precisely while using a fair chunk less fuel, it's not a great deal more expensive. But will a better 911 by the numbers make for a better 911 to drive? The first test are in November...