How to sell a performance Ford to the YouTube generation? This man can help

So now you know how the

drives. Why it does what it does is a question worth putting to a man whose influence is all over it. So when a familiar baseball-capped, mirror-shaded figure appeared at the coffee stop on the launch route we reckoned it was worth cornering him for a quick chat. 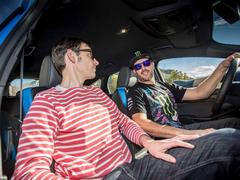 Traditionally RS Fords have traded heavily on their motorsport bloodline, especially when homologation rules required limited run road cars. Times have changed though. No greater reflection of that can be found than the fact that the major dynamic influence on the Focus RS didn't come from lap times or stage rally competition. Rather from a bloke who does spectacular smoky doughnuts around closed-off city centres for no other reason than it looks cool and provides a steady stream of clickable, marketable and shareable content for the YouTube generation. And the sponsors who want to talk to them.

In person Ken from the Block is rather more serious and corporate than his image may suggest. But, when you consider his background, that's no surprise. Skidding a car around obstacles with a GoPro on the roof isn't that difficult after all. Transforming yourself into a global celebrity and one-man marketing machine off the back of it? Rather a bigger deal.

Did you have a genuine development role in the Focus RS then?
"I pushed for Ford to do the all-wheel drive set-up in this car so it has been years of pestering. The previous generations of the RS have been front-wheel drive but the cars we race are all-wheel drive. And once they started the development they brought me in to do some of the testing for the handling components of the car. It was actually a lot of fun because everything I've done previously in terms of testing and development has been on race cars - I've never actually done anything for street cars." 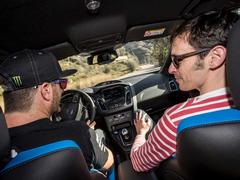 So it's about more than turning up and smiling for the cameras?

"Yeah, I mean, they set out to do something quite different for them, production wise, so they really put a lot of time and effort into making the best product they could. And they brought me on three different occasions for testing. I wasn't there to work on electronics for air conditioning! Strictly handling, suspension and all-wheel drive."

Are you the man to sell the hot hatch to America?
"The hatch thing has actually been doing pretty decently in the States but Ford's never brought the RS and it's really about waking up the consumers. I've been pushing the hatch thing since I've been with Ford; the high performance race car is different from the production car but now they have a production car that is high horsepower, all-wheel drive so it's now starting to fit more than it ever has in the past." 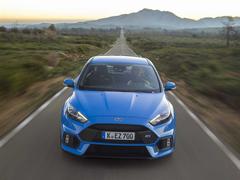 So who buys hot hatches in America?

"It's a different consumer from your Mustang or truck consumer, there is a distinct hatch consumer and a car like the RS epitomises the best kind of car you can get for that consumer. It's not that a car like this hasn't existed in the States, you've had products from other manufacturers there."

The Japanese you mean?
"Yeah. But some of those brands now aren't racing the things they were years ago. And it's unfortunate when you have such a classic car like the STI - it had the race heritage but now that has gone."

Would it have been impossible to market a front-driven RS to the US market?
I think, worldwide, the front-wheel drive car has been around a long time and really you can get some good performance out of it. But it is a bit restrictive on looser surfaces or wet surfaces or tighter hairpins - all-wheel drive just performs better. I think that that's a big selling feature just in general." 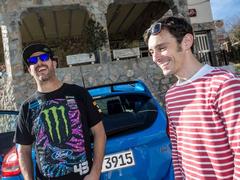 Is it really a good idea to offer a Drift mode to people who, let's face it, might not have the skills to use it?

[Laughs] "The thing about Drift mode is it's something that exists in the world of cars. My Ford Raptor has it, it's basically an electronic control that adjusts how much oversteer you get ... the Raptor actually has a thing called off-road mode which, you know, you turn the traction control down and you push the off-road mode and it lets you then get the yaw further out. Because of the liability and everything involved with building production cars nowadays there is so much electronic control. You can't drive the cars the way you did 20 years ago. So the manufacturers are having to build the controls in for the consumers that wanna do this stuff when they take the car to the right place, like a track or a closed facility."

Did you push for it to be branded as a Drift mode?
"You know, they did that themselves! Of course, I like that word and it kind of defines some of the things I do. But I'm surprised they picked that word!"