The Mercedes-AMG CLA 45 S 4MATIC+ Plus Coupe has a lot going for it. But Dan has some issues... 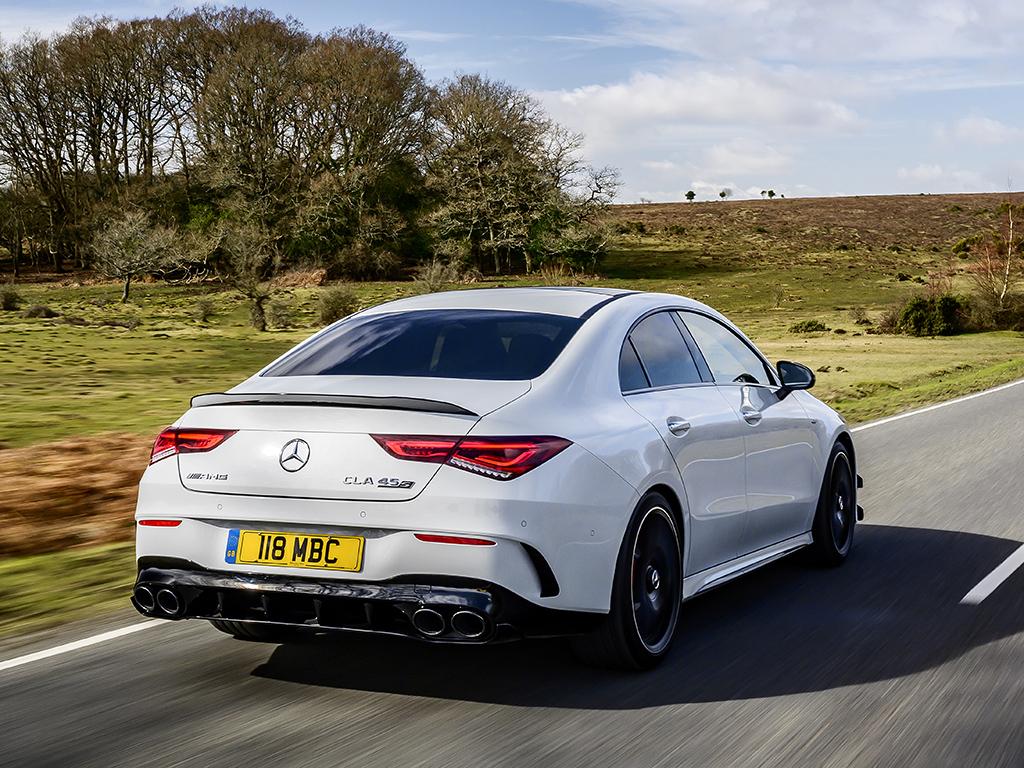 Rather than review the Mercedes-AMG CLA 45 S in the conventional manner, I wanted to discuss the car in terms of the issues and themes that surround it. By way of background and before we get stuck in, the CLA 45 S is essentially an A45 S with a saloon boot, although Mercedes-AMG would rather I referred to it as a four-door coupé (which it isn't).

Along with its hatchback sibling, the CLA 45 S is the most powerful four-cylinder production car on sale today, its 2-litre engine developing a pretty staggering 421hp. In the heady days of the Mitsubishi Evo, that sort of shove from 2-litres and four-cylinders also meant 5000 mile service intervals and not much by way of tractability - though not anymore.

The issues I have with this car are listed below, but I want to spend a moment on the many things I liked very much about it, simply because it'd be unfair of me to leave you with the impression I didn't think much of it. It's massively fast, of course, but it also has the kind of cross-country pace that Porsche 911 drivers break into cold sweats over. Its chassis is supple and composed, which is quite a turnaround from those earlier four-cylinder AMGs that thwacked and thumped their way along uneven surfaces. That's where a good deal of this car's speed along a British B-road comes from.

The CLA 45 S also looks quite striking and it has a decent cabin (although more on that in a moment). The saloon's additional bodywork at the rear does add some weight compared to the shorter hatchback, although you'll need to drive the two back-to-back on a circuit to identify the CLA's extra 50kg. Like for like, the CLA 45 S is almost £2,000 more expensive than the A45 S, but it will be a rarer sight on the roads.

In many ways this is an enormously capable car. In fact, I don't think I've ever had so many issues with a car as good as this...

1. Performance car names are getting far too long

I've copy and pasted this car's full and very ponderous name from the official press kit: Mercedes-AMG CLA 45 S 4MATIC+ Plus Coupé. The double 'plus'. The erroneous 'coupé'. The sheer bloody length of it. I think we should declare here and now that if you can't announce your car's name in the pub aloud and in full without being laughed out of the place, it's too long.

The second 'plus' refers to an optional upgrade package that includes the body styling kit, a panoramic sunroof, LED headlights, massage seats and a Burmester hifi. The Plus pack doesn't come cheap...

The basic price of the CLA 45 S is £52,145, but with the Plus upgrade package and metallic paint, the test car I drove would set you back £58,640. The cost of new cars does seem to be snowballing right across the spectrum, but the best part of £60,000 on a car that's ultimately based on Mercedes' smallest model is outrageous. I'd want at least one model up if I were paying that much. And I'd expect a V8. I couldn't imagine forking out that sum on an AMG and not coming away with a C63 at the very least.

The rest of the problems I have with this car follow on from the previous point. For instance, while the CLA 45 S is reasonably refined on the motorway and pretty well screwed together, it has nothing like the integrity or the interior build quality that you'd expect of a £52,000 car.

The platform that the CLA 45 S sits upon - which is where a car's sense of solidity comes from, or in this case, doesn't - feels very good for half that money and absolutely fine below £40,000, but when the asking price starts with a five and very nearly a six, these A-Class underpinnings just aren't up to it. It feels just a bit too tinny at motorway speeds, there are too many interior squeaks and rattles and the plastics within the cockpit are too patchy.

I remember being hugely impressed by the Mercedes-AMG A35's interior, which looked and felt way more expensive than that of the similarly-priced VW Golf R. At around £35,000 the A35's cabin made sense, but when you transpose that same interior into a car costing £52,000, it starts to feel a little thin somehow. As noted above, some of the plastics are hard and scratchy, some of the switchgear doesn't feel high-grade enough (the ventilation controls in particular) and when you slam shut a door, you hear a metallic tink rather than a wholesome whump. Although I will acknowledge that the pair of 10.25-inch screens that make up the driver's instrument binnacle and the central infotainment display are superb.

5. Four-cylinders can never replace eight (in terms of character)

Did Tobias Moers really storm out of a Mercedes-Benz board meeting upon learning that AMG will soon switch from eight- to four-cylinder engines for certain models? If it's true, I absolutely stand by him. The CLA 45 S's 421hp 2-litre demonstrates that from four-cylinders you can extract a tremendous amount of power (and flexible, responsive power at that) and when allied to a hybrid drive system, an inline four could certainly develop the power of a big V8. But character? It doesn't have any. It's effective but bland. There isn't the rumbling soundtrack that you get from an AMG V8, nor that irresistible power delivery. Only when the performance car sector has been reduced in whole to nothing more than a numbers game will a hybridised four ever replace a V8.

As many of us have, I've celebrated these increasingly powerful hot hatches and small saloons over recent years. I remember being amazed when the Audi RS3 Sportback and Saloon emerged three and a half years ago with a nice round 400hp. And I have enjoyed driving these cars as well, not least the tremendously fast and very capable CLA 45 S.

There is only so far a given model's platform and interior architecture can be stretched, though. At some point, you inevitably begin to feel shortchanged when a car's underpinnings and cabin are shared with a variant that can be bought for less than half the price. For me, the £58,640 Mercedes-AMG CLA 45 S 4MATIC+ Plus Coupé is the car that stretches this whole hyper-hatch thing beyond snapping point.