First AMG-engined Aston Martin is here and it's a cracker

Given an Aston Martin is very much a car bought with the heart rather than the head, the emotional associations with the brand are absolutely vital to the success of the product. So, whatever practical or pragmatic sense there may be in using Mercedes engines, the threat to the way we feel about the cars is very real. 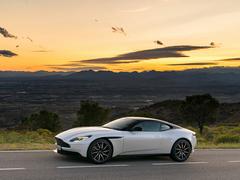 Nothing tweaked on the outside - jolly good!

. And a big improvement over what was there before, though identifying whose parts bin the column stalks come from may admittedly be of more interest to motoring journalists than actual customers.

though? Given it's at the very heart of the car's character it matters rather more.

Which explains the tactful distance maintained by both parties. Talk to AMG and they'll express polite interest in the Aston Martin deal. But when it comes down to it they'll point out in this instance they are, bluntly, a supplier. Build the engines, crate them up, send them off.

And when they unpack them at Gaydon? There's no attempt to pretend it's anything other than a bought-in power unit. But also clear statements about what they've done to make it their own, up to and including a new intake system, custom Bosch ECU and programming, a new sump to match the crank centreline of the V12 and an exhaust system tuned to make it sound less Teutonic. Given the same package will underpin the pending Vantage replacement there's rather a lot at stake. 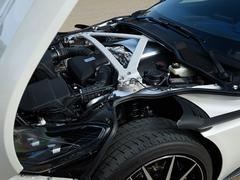 The good news arrives with the first press of the starter button, the gargling growl familiar to anyone with recent Aston Martin experience. This is entirely deliberate, a chat with project manager Paul Barratt and chassis guru

revealing they wanted less AMG bass and more sophisticated mid- and high-range. It's always there too, Barratt insisting there's no piped in noise via symposer or speakers, but admitting they did drill a few extra holes in the boot cladding to make sure the sound comes through loud and clear.

The figures are interesting too. 510hp is nearly 100hp less than the Aston-built 5.2-litre V12 in the existing DB11, but torque is much more evenly matched, the V8 at 498lb ft compared with 516lb ft in the V12. There's only a tenth in it to 62mph, the senior car stretching its legs at the upper end to record 200mph against the V8's 187mph. Inevitably, there's more interest in what goes on between those numbers, informed by the fact that nearly all of the 115kg saved over the V12 comes from the engine, switching the weight distribution from 51:49 front to back in the existing car to the other way round. As before - and distinct from the Mercedes applications - the engine drives the rear wheels via a transaxle-mounted eight-speed automatic. 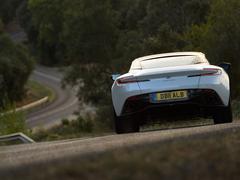 Eyes doing spirals from too many numbers? Becker's view on the subjective stuff is potentially more interesting. It's at a different power and price point but we've recently enjoyed what chopping 50-odd kilos off the

front of the F-Type

did to the handling. Twice that off the nose of the DB11 has given Becker opportunity to dial in a slightly sportier feel. The weight saving, paired with subtle changes to the steering weight, and tuning of bushings and suspension arms, has resulted in faster response and an improved sense of agility. The intention is clear - the 4.0-litre engine is important for markets that tax larger motors, but this is also a chance to create a DB11 variant with a character of its own.

You never escape that you're in a big car, something not helped by the lofty dash and slot-like view through the windscreen. The Becker touch in the way the car has been set up reaps immediate rewards though, his Lotus-honed instincts shining through even in something weighing twice as much as the Elises on which he perfected his craft. There may be a lot of weight, but it's nearly all between the axles which, like the V12, makes turn-in response utterly instinctive and stance steadfastly neutral on a balanced throttle. Just that in this instance it feels rather more alert and eager to respond, the relationship between roll and steering angle perfectly balanced to make joined-up sequences of corners flow seamlessly. 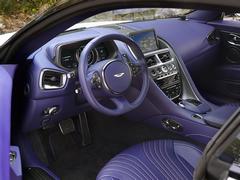 Although the torque numbers are close on paper, the smaller engine is getting a proportionally larger amount of its thrust through forced induction. So, where the 5.2 feels like the old V12 with a bit more mid-range, the V8 has a definite turbocharged whoosh in its power delivery and can be a little tricky to modulate on part-throttle. No such complaints when you're properly on it though, the power of this AMG engine meaning you're in no way short changed in terms of performance. And it relishes being revved out too. Sure, it's more urgent and less majestic than the V12, but point-to-point there isn't much in it.

You keep coming back to the benefits of that centred weight distribution too. Whereas the Bentley Continental GT and AMG versions of the S-Class can also do the fast sporting coupe thing, they both feel nose heavy and less agile. The balance and the mechanical limited-slip differential give the DB11 a pleasingly old-school feel too, the fact the mass is contained meaning Aston can keep a fairly loose grip on the electronic reins and let the car move around a little, even with everything on. On unseasonably wet and slippery Spanish roads it's a car to be respected, requiring meaningful corrections if you're clumsy on the throttle and wake the turbos at the wrong time. That's appropriate for an Aston Martin though - while it's no TVR, it's a car demanding of an engaged driver who knows what they're doing. Against the all-wheel drive of the Bentley and the roll-cancelling trickery of the Mercedes it's a pleasingly simple formula though, this level of feedback in a car of such size and weight an impressive and refreshing achievement. 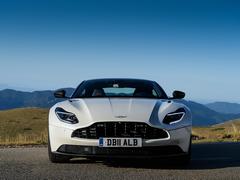 Concerned about using a turbo AMG V8? Don't be!

There is a mid-way ESP setting, but it's sufficiently buried in the menus, and the throttle balanced adjustability is accessible enough with everything on that you'd need to be determined to hunt it out. As it is, you're left with GT, Sport and Sport Plus modes for engine and gearbox, with dampers independently following the same progression via a separate button - and increasing weight and response to the wheel in the process. Sport and above also lets you run the gears out to the limiter in the manual mode, the automatic responding fast enough to the paddles that you wonder why the S-Class Coupe persists with its hybrid auto and lock-up clutch combination. Nor does it feel significantly slower than the dual-clutch in the GT, the gearbox being Aston Martin's key differentiator when compared with the AMG applications of this powertrain. And probably the best all-round compromise.

V8 or V12 then? The smaller-engined DB11 is no second best in terms of on-road performance and proves there is space for a slightly more assertive character in the senior Aston Martin. Though saying that, if you've got the choice, the V12 is the more satisfying and appropriate option for this particular car. What this installation does confirm, however, is that the arrival of AMG V8s in Aston Martin engine bays is nothing to be afraid of. As a dry run for the critical Vantage replacement it is, indeed, a teasing appetiser. And, let's face it, if you're going to buy your V8 in from another manufacturer, it may as well be AMG.