With an all-new TVR Griffith about to launch, what better time to reconsider the 1991-2002 vintage...

Launched in 1991, the curvy Griffith was a big departure from the wedge era cars that preceded it. Styled by TVR boss Peter Wheeler and John Ravenscroft, it mixed simplicity with perfect detailing to take the firm into competition with the likes of Porsche and Ferrari.

Those weren't idle marketing boasts either, as the Griffith came equipped with a 4.0-litre Rover-derived V8 that made a claimed 240hp. While the outright power output might have been optimistic, performance proved the Griffith could knock off 0-60mph in 4.9 seconds to be on a par with the 911 Turbo and Testarossa.

The arrival of a 280hp 4.3-litre derivative brought with it even better performance figures, yet still TVR charged much less than its competitors. A 4.3 cost £28,965, making it much more affordable than anything else of comparable pace or style.

In 1993, the 500 model was added to the range and the Griffith finally received the mammoth power its shape so deserved. This car came with a 340hp 5.0-litre version of the venerable V8 and a five-speed manual gearbox like the others in the line-up. From rest to 60mph took 4.1 seconds, but it was the in-gear acceleration that made this car so appealing. That, and the noise from the exhausts.

All of this was enough to keep the Griffith in production until 2001 alongside newer and more sophisticated models. Its enduring appeal made it one of TVR's best ever sellers and the model was capped off with a run of 100 Special Edition cars. They have a commemorative plaque in the glovebox, and different rear lights and door mirrors.

While most newcomers to the Griffith will gravitate towards to the 500 to begin with, it's worth noting there's not such a gap in on-road performance between this and 4.0- and 4.3-litre cars. Also, the 4.3 is the rarest of the engines, so has some collector value.

Prices for the Griffith are very dependant on condition and history. Don't be put off a high mileage car, either, as these cars thrive on regular use and careful maintenance.

The glassfibre bodywork was made to a high standard, so it should be free of ripples.

Any cracks or uneven finishes in the bodywork point strongly to accident damage. Many Griffiths will have been in shunts, but check repair work has been carried out to a high standard. Look for overspray and uneven paint matches as a sign of a cut-price job.

The edges of the windscreen can go milky as the glass delaminates with age or because it's been damaged in a crash and badly replaced.

The fabric hood is in two parts, with the targa-style upper section stowing in the boot. The original cover for this is a sign of a caring owner.

Check the plastic rear screen is not scratched and all of the seals mate properly to keep the weather out of the cabin.

Wear on the driver's seat leather is common but easy to remedy. Some early cars had a fabric and hide mix of upholstery, but leather is more desirable.

Inspect the carpets for water damage that points to leaky seals.

Inoperative dials are most likely due to a bad earth rather than a broken gauge. A circuit tester is your best friend to solve these issues.

Early cars have a speedo and rev counter that sweep from right to left, while later Griffiths adopted the more usual left-to-right style.

The Rover V8-derived power units are simple to service and rebuild, and there are plenty of tuning options from several recognised specialists.

TVR offered a big valve (BV) conversion for the 4.3-litre motor to give it 300hp. Look for a sticker on the engine to identify this and check with the owners' club to be sure this is a genuine, and rare, converted model.

A small number of Griffith 4.5s were made, but the 500 soon overtook this idea.

Lucas engine management should work fine, but aftermarket ECUs are a common upgrade and can make starting easier.

Make sure the thermostatically operated fan cuts in when the engine reaches 90C. If it doesn't, the motor may have overheated.

Oil pressure should be 10-15psi at idle and 30psi when driving.

Any signs of smoke from the exhaust are bad news and it's best to avoid any car with this problem.

Camshafts routinely need replacing at 50,000-mile intervals and this will cost around £1,000 at a specialist. It's also a chance to upgrade to a profile that delivers more power.

Starter motors fail because they get fried by under-bonnet temperatures.

Clutches should hold up to 50,000 miles of normal driving.

Radiators become blocked and cause overheating. An aluminium radiator upgrade is common and something to look for.

The limited slip differential is long-lived, but listen for any whines. The Griffith started life with a GKN diff and swapped to a Salisbury unit in 1994. A Quaife LSD was an option too and, from 1997, TVR also listed a Hydratrak unit.

4.0-litre cars have the Rover LT77 five-speed gearbox which should be trouble-free with regular fluid swaps. The 500 used the T5 unit from Borg Warner, which is identified by reverse being to the right and back.

The most important check you can make on any Griffith is the state of the chassis. First port of call should be the outriggers, but you need to inspect everywhere. The powder coat finish can let water in to rot the steel box section unnoticed. Most cars will have had remedial work or a new chassis, but insist on having it checked and seeing receipts for work.

Cars from 1995-on have power steering as standard, which makes the Griffith much easier to live with. Any car that's had PAS retro-fitted needs to have the system inspected for the quality of work.

Worn suspension bushes will show up through twitchy handling and vague steering feel. Front ball joints are usually the first to go. Early cars used Koni shock absorbers, while later models changed to Bilstein, both work well and are easy to replace. Also look for uneven tyre wear or feel for shudders through the steering wheel as indicators of worn suspension.

Rust affects the front wishbones, so check for this. New ones are simple to fit. 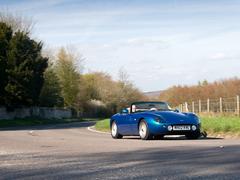 Brakes work well thanks to the Griffith's light weight.

Later 260mm front discs can be swapped onto earlier cars that came with the 240mm rotors.

7x15in front and 7.5x16in rear wheels were shod with Bridgestone tyres when new. Replacements are easy to find.