Porsche's '73 Carrera RS is 911 RS genesis, but is the duck-tailed icon still worthy of the praise heaped upon it? 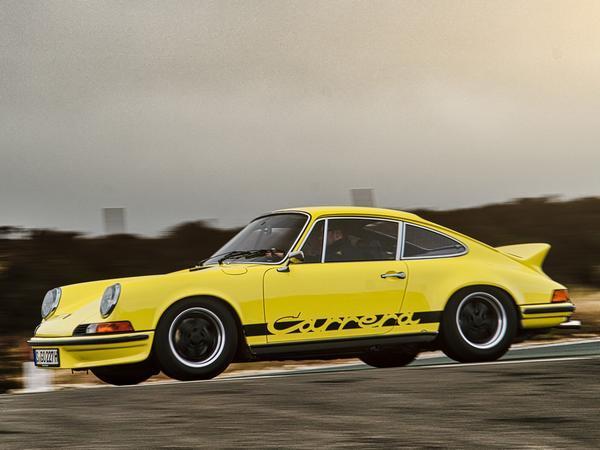 Scrolling down the pages containing previous Heroes reveals we've a lot to thank homologation rules for. Those motorsport regulations that dictate for weekend fun, production run - specifically 500 - or something like that. Lengthy, hugely detailed books have been written about why and how the Carrera RS came about, and if you're after that level of information get yourself off to Amazon. Or tap up Josh Sadler at Autofarm for a natter. He knows a thing or two about RSs.

Basically Porsche was getting beaten on the track and it needed to do something about it. In 1972, then, the Carrera RS was shown to the world at the Paris Auto Show. It took the somewhat simple idea of adding a bigger engine, removing weight, making improvements to the aerodynamics - that stabilising rear 'ducktail' the most obvious element of that - and bolting on some Fuchs forged alloy wheels with wider tyres squeezed under subtly flared arches.

All simple enough, and pretty much the same formula RS models adhere to today. The paperwork for ordering one, as well as the need for a Porsche employee to drive every one of the 500 cars off the production line to a weighbridge to certify it for homologation, was anything but. Indeed, it's a wonder Porsche persevered at all. Actually, it isn't, Porsche is about as bloody-minded a company as there is; after all, how many mass-produced arse-engined sports cars are available today? Add in the fact that the initial 500 sold out before it was officially announced, Porsche eventually selling 1,580 in total, and the RS wasn't bad for business.

The original 500 were built with thinner gauge steel and pared back equipment for a sub-1,000kg kerbweight. Later cars would be heavier, simply because Porsche didn't need make them so light as it had fulfilled the regulatory requirements to take it racing. It won pretty much everything, too, helping cement its legend, and remained very competitive even decades after it was introduced.

They're sought after as a result, all of which means heavyweight prices for Porsche's featherweight fighter. Indeed, if price is any measure of hero status, then we have a winner. Owning an original 2.7 RS is the vehicular equivalent of lending Jobs a few quid when he was messing about with circuitry in his garage. Look at the prices now and weep, we're in the realms of add a zero to what you'd have paid about 15 years ago - so a £60,000 car is now more like £600,000, while most are POA. They were just over £7,200 in '72, not an insignificant amount, but...

I'm trying not to think of that as I get into this yellow car on the Isle of Man. I'm here to drive the new GT3 RS, but really, all I can think about is its great x 9 granddad. I've driven a '73 RS before, back when that additional zero wasn't around, and in the dry. Today, in Porsche's own, recently overhauled, sub-11,000km example, a Touring - probably worth anywhere between £600,000 to a million quid. I'm glad it's the museums'. Why? Because I want to drive it. Properly.

I've got a decent enough excuse, too, as it'll be accompanying its modern water-cooled relations around much of the TT course. Leading is Mark Higgins, he of the four-wheeled lap record in another flat-engined machine. He's not hanging about, his co-driver, TT rider Steve Plater (2x winner in Supersport TT '08 and the '09 Senior TT) shouting comments about what gear he'd be pulling and speed he'd be doing on his race bike over a radio.

That radio is the most sophisticated bit of electronics in the 2.7 RS, this is, after all, a 45-year old car. That low kerb weight, allied to the 210hp from the 2.7-litre engine powering it, means it's not entirely outgunned among its more youthful relations. The next youngest - a 996 GT3 RS - is developing almost double the output of its ancient relation.

That the figures remain genuinely impressive now underline Porsche did a proper job back in the day. It must have felt indecently quick then, it able to reach 62mph in 5.8 seconds. If the derestricted roads on the Isle of Man weren't so wet and busy I've obviously be testing its claimed 152mph maximum, too.

Though that convoy isn't hanging about. There's the odd scary 'we do 195mph down here' shout out over the radio when we're doing about a third of that, bike racers clearly lacking the imagination as to what those trees, walls, actually everything around here could do to them if they fall off. I'll stick to four wheels, the 2.7 RS quick enough, the detail it's delivering to me through the steering and my backside only confusing me further as to how the likes of Plater manage to hang on over what can only be described as appalling tarmac.

Smooth surfaces are rare here, allowing the 2.7 RS an advantage, its thicker sectioned tyres and less overly sporting suspension affording it control and poise where the newer cars start to lose composure. It's a joy to drive, the steering wheel impossibly thin, the gearshift requiring a little bit of patience and learning, but the rewards when you get it all right worth the effort. There's masses of feel, the sensation-rich detail as thrilling as the speed it facilitates, the lack of mass the 2.7-litre engine is shifting allowing it its relatively contemporary performance. If only the brakes were similarly convincing, needing a good shove before they do much. Old car brakes...

The 2,687cc flat six sounds magnificent, better outside, so much so I get out and wander around with it idling to enjoy its charismatic air-cooled flat-six wuffle. Inside it's more cultured, the engine smooth, revving enthusiastically, brisk at low revs, but pulling with more conviction above around 4,000rpm. It redlines at just over 7,000rpm, and, certain I'm unlikely ever to get the chance to do so again, I let the needle arc round to within a whisker of it just to experience it a few times.

Doing so underlines just why these cars are so coveted, as it's really very special indeed. Not just the engine, the whole package. This a car that makes every drive an event, it just a shame that with their values so stratospheric they'll get used less and less by owners worried about their investment. The real value is in what they were designed to do, be driven, and hard, but of course with a lightness of touch.