If 2009 doesn't seem all that long ago, then you certainly aren't alone. However, it's a jolly long time in the car world. Alright, so you can still buy a Vauxhall Corsa today that's broadly the same as in 2009, but the Ford Focus RS has changed drastically in that time.

See in addition to this Mk2, 'our' Mk3 RS was also brought along to sunny Essex for our Hero shoot. Their rightful home, you might say. There's a video and more detailed blog to follow comparing the two yet, even for just this Hero story, the newer car provides some valuable context.

Valuable context that makes the five-cylinder car seem initially a little - underwhelming is too harsh a word - just a bit plain actually. Bear with. In the new RS you're bombarded from the off with exhaust pops, super sharp steering and aggressive throttle response. The older car is considerably more relaxed: there's more lag, less noise and, odd though it may sound given how it was once received, an almost subdued gait. Bizarre.

That's a point we'll return to, but first some context on why the Mk2 Focus RS qualifies as a PH Hero. Back when it was shown at the London Motor show in 2008, more than 300hp in a front-wheel drive hot hatch was unheard of. The Focus ST had 225hp, an Astra VXR made 240 and even the quattro Audi S3 had 265hp. "Madness!" came the cries, particularly after one or two rather unruly Mk1 RSs were made. With 212hp.

Ford's solution was the innovative Revoknuckle front suspension, combining it with a front limited-slip differential in an attempt to give the Continentals a fighting chance. And it worked. Here was a front-wheel drive fast Ford with more than 300hp that wasn't a torque steering nightmare. The press reports returned raving; while it wasn't as sharp to drive as a Megane R26.R, there was easily enough talent to justify that hallowed nameplate. Anyone who thought the mouth outmatched the Ultimate Green trousers was soon answered. Back then and now, it's a car widely lauded by press and public alike.

Is it deserving of that affection? Certainly there are bigger differences between it and the new car than you may expect, particularly if you take them as a pair of fairly similar blue Ford hot hatches. As mentioned though, we'll deal with those in a separate story; here it's time to reflect on how good (or otherwise) the second Focus RS is. 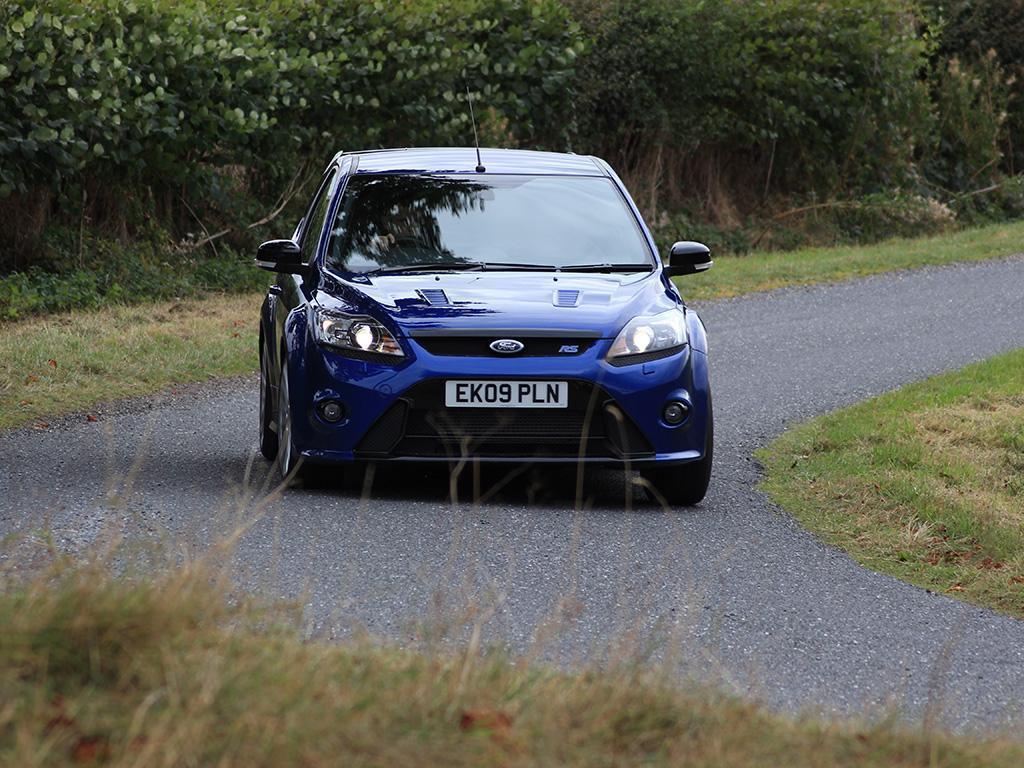 That engine remains a key part of the appeal. The range of modifications from the ST to RS was extensive, the latter benefitting from new con-rods, pistons and crank on top of the usual work around the turbo and exhaust. Drop 305hp and 324lb ft in a FWD hot hatch now and it would be competitive; back then it must have felt ballistic. While there's more lag and a little less willingness to rev than the latest hot hatch turbos, the mid-range feels super strong (thank the extra 500cc over most hot hatches for that) and the noise is fantastic. In case you hadn't guessed. It lends this RS a more endearing character than the four-cylinder cars, the noise more authentic and cultured than the augmented racket in the new RS. It's rewarding at all commitment levels and speeds, a properly exciting centre piece to base a car around.

Moreover, the RS still feels bloomin' quick. In a modern-day world of VAQ and cars from the showroom on Cup 2s, there was a danger that the RS's contemporary plaudits could look very outdated. Far from it. Naturally you have to be more considered with throttle applications than with a four-wheel drive car, but the way this car finds purchase through second and third gear is remarkable. There's the odd tug of the wheel here or there, plus a fondness for picking out camber changes, but rather than undermine the experience they enhance it; they're exciting traits, a reminder of just what the car is coping with. It's far from the unruly rocketship you might expect.

The steering is good, slightly slower (2.3 turns lock to lock against two) than the new car and electro-hydraulic rather than fully electric. The response is consistent, weighting spot on and there's enough feel coming back to let you know just how much more the front tyres have left to give. The gearbox is short and slick, if a touch light, and the brake pedal feels good; there's real polish to the dynamic set-up. 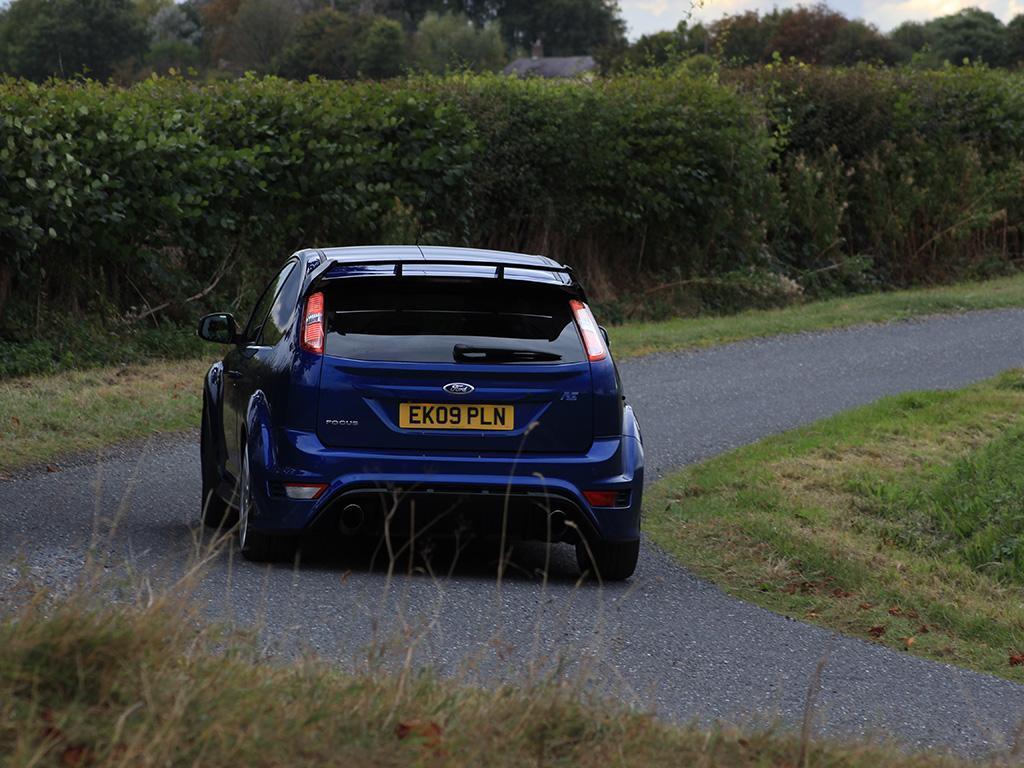 Here is where the magic happens

Weight and attitudes towards it are also things that have changed since 2009. See a hatch today with 305hp at 1,467kg (with a driver) and it's about average, rather than the total lard arse it may have seemed then. Place it in 2016 though and, while it's not suddenly a Renault 5 Turbo, the RS is more game than you might expect. Its turn-in response, mid-corner balance and traction are pretty damn good. As a Ford Heritage car and with limited time it's hardly an exhaustive test, and there's no doubt the new car is quicker down a road, but the Ford chassis magic of the 2000s certainly shines through today. If those initial impressions were a little disheartening, the RS has comprehensively charmed within a couple of hours.

Like all the most iconic fast Fords too, this Focus RS looks absolutely tremendous. It's aggressive and imposing and butch, spoiling to pick a fight with anyone and anything it comes across. The interior? As this is a celebratory piece we'll call the cabin of its time. That wasn't great for its time. If you thought the new car was bad then you ain't seen nothing yet! 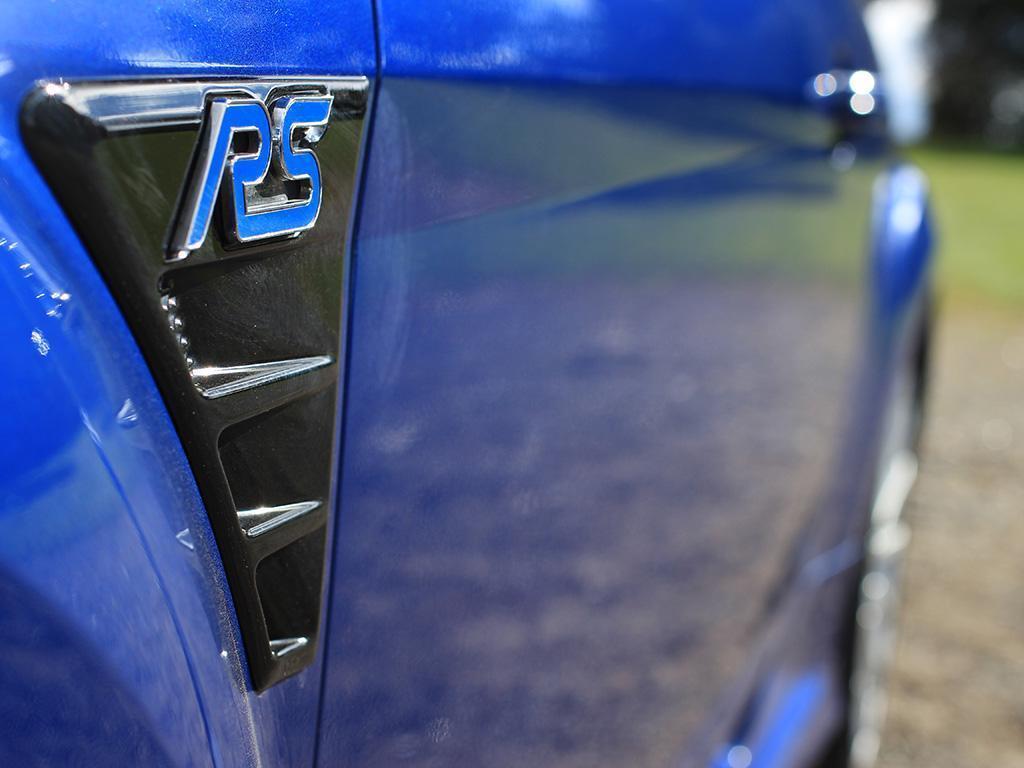 A legendary RS and a worthy PH Hero too

The RS remains a hugely enjoyable car though. In the context of current hot hatches it feels less rabid than it will have just a few years back, but very likeable nonetheless. That engine plays a key part in that, occasionally in fact overshadowing the dynamic advancements this car introduced. No doubt the used values will make it appear all the more heroic in the eyes of owners too!

In fact, residuals are not a bad place at which to conclude. Not only is the Focus still a great driver's car, it looks to be an incredible investment. The very cheapest car for sale on PH at the moment is £16,000 with nearly 100,000 miles; cars with about average mileage start at £18,000 and there's even an RS500 for sale at £60K (!). For such a popular car (more than 4,000 came to the UK) with a £25K start price and lacking the exotic parts of the first RS, that's some achievement. To provide some context, a Megane R26.R - remember less than 200 came to the UK - will cost you about the same as a Focus RS. Crazy. So if you want a five-cylinder Focus RS, and there are plenty of reasons why you do, the current state of the market should be all the encouragement you need - there won't be another like it!