If you were a successful area manager in the mid-1980s and you needed a quick repmobile to impress your clients, your choices were limited. What you really wanted was something with real attitude and ability. And the ideal car was probably a BMW 325i. But it was expensive back then, and the real-world choices were probably between the Citroen BX GTI, Ford Sierra XR4x4, Vauxhall Cavalier SRi or MG Montego. 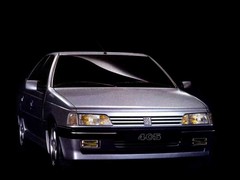 Although these cars were appealing, none had that instant 'wow' factor or Volkswagen Golf GTI or Ford Escort RS Turbo. And in the mid-1980s, image mattered. A lot. Thankfully, salvation would come from the darling of the fast car set, Peugeot. In 1987, and hot on the heels of the darling 205 and 309 GTI, the on-form French company weaved its magic on its latest repmobile, the 405. It was always going to be good, as the 405 was such an excellent starting point. Few would have suspected it would have ended up being among the decade's very best cars.

Je ne sais qois
The 405 was designed and engineered by people who loved driving. It boasted an all-independent suspension set-up - MacPherson struts up front, and trailing arms at the rear - when for most rivals, a beam-axle was more than enough. That body was also superbly-engineered, and although the 405 was constantly criticised for having a small boot, high-loading sill and fixed rear seats, it was designed this way, so the shell was stiff. 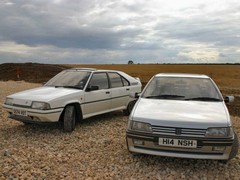 BXGTI shared an engine but wasn't as sharp

But weeks after it hit the market, Peugeot transformed the 405 into the decade's best affordable sports saloon. The Mi16 (or MeeSez if you're French) was made special by the addition of an all-aluminium naturally aspirated DOHC 16-valve engine, un-romantically called the XU9J4. It pushed out 160hp, and happily revved to its 7,200rpm cut-out. This brilliant new engine cost a reputed £3,000 per unit. But then, it did feature such delights as a magnesium cam cover, lightweight flywheel and big competition-specification cylinder head and valve gear.

French fizz
We'd first experienced this jewel-like engine in the Citroen BX GTI 16V, and had been blown away by its driveability and performance. But this was a hot version of a five-year old car and many questioned whether it was really worth £3,500 more than the 124hp eight-valve. That wasn't really the point. But it would take the 405 Mi16's arrival to truly appreciate just how good this engine was. 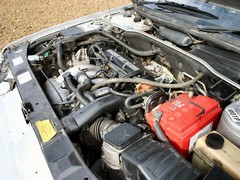 And what a car. To differentiate the Mi16 from the hoi-polloi 405s, a standard 80s issue bodykit and rear spoiler on stilts were fitted, complementing the Ferrari-esque five-spoke alloy wheels. Inside, there were fewer changes - jazzier trim, and a leather-bound steering wheel - but that's not where the money went. Back in 1987, Motor magazine beat the official acceleration time by sprinting its first Mi16 from 0-60mph in 7.8 seconds, and onto a 134mph maximum, but these figures fail to convey the sheer joy you'll get from wringing the neck of an Mi16 today.

Because that's how you get the most out of one. The thing bursts into life eagerly before settling into a lumpy tingling idle. Be prepared to be disappointed by its exhaust note - it sounds flat and fizzy. And it does feel a little ordinary when pottering. Bear with it though and the first time you floor the throttle you'll be amazed at how the engine note hardens at 4,500rpm. 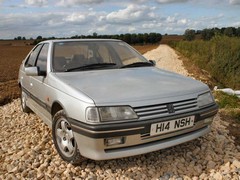 There aren't many left - cherish it if you find one

Hang on to it, though, and enjoy as it heads into the redline - it's now in full-cry as you quick-shift up a gear, and right into the heart of the power band again. If you're as good as Motor's wheelmen, you'll hit 100mph in gratifying 22 seconds.

So, it's quick - remarkably so for a car of its era, without the benefit of a turbo or variable timing. But where the 405 comes into its own is in the way it handles. Peugeot's chassis engineers certainly knew a thing about springing and damping, because just like a 205 or 309GTI, the 405 remains inspirational on the right piece of road to this day. Its steering is well-geared, nicely weighted, and full of feel and communicates every camber and surface change. Nothing available at the price came close - not even the BX.

PSA didn't make the XU9J4 for very long - and after 1992, this fine engine was replaced by the 155hp 2.0-litre found in the 306 GTI. The later cars are less peaky, and slightly heavier on their feet, which means that the 1988-92 1.9-litre is the one to have. As for the Mi16x4 - forget it - extra weight, less performance and no more balance is no compensation for more grip in the snow. 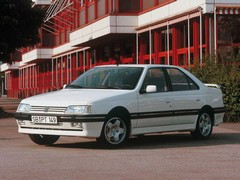 Another Peugeot hero - ever to be repeated?

Many people will tell you that like all fast 80s Peugeots, the 405Mi16 will perform violent acts of lift-off oversteer, but the jury's still out on that one in 2012. The first fast 405 I owned back in the day certainly managed it - scaring me on many a wet corner - on its standard-fit Michelins, but once on more track-biased Yokohamas, it was near-unstickable.

And it's the same with any 405Mi16 today - fit it with modern rubber, make sure its bushes, drop links and dampers are are in fine order, and enjoy an amazing car of rare ability. Finding one now's a difficult matter - survival rate is pitiful, with 13 taxed 1988-'92 cars left on the road ( How Many Left also reports 42 Mi16s of all types, including 4x4 cars, post-'92 2.0-litres and the plusher Le Mans). So cherish one if you manage it. And use it how its makers intended.

The Peugeot 405Mi16 joins the very top echelons of the PH Heroes because it's a rare, great-looking car - and possibly the greatest four-door ever to come out of Peugeot. Could you imagine them building something quite so desirable today?