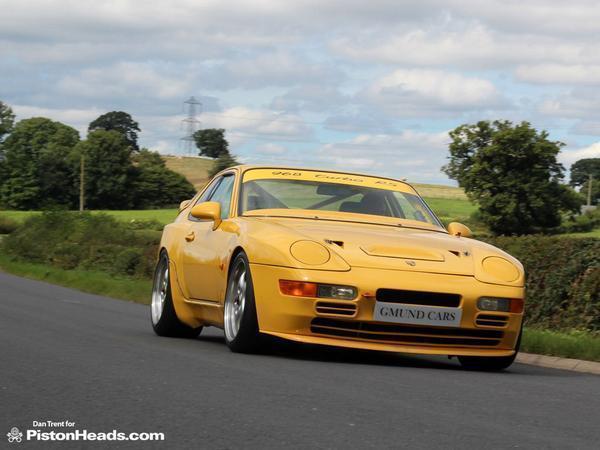 As you'll have probably gathered Porsche is celebrating 40 years

of its transaxle models

this year. And having already featured the

You may be aware of the 968 Turbo S, a super-limited production evolution of the Clubsport built and sold by Porsche's racing department under the leadership of Jurgen Barth and Gerd Schmid. Described as representing "the new GT class generation" and "destined for both racing activities and public street use" just 14 were built, identifiable by the two small NACA ducts on the bonnet and a bigger, adjustable rear wing. 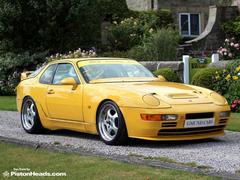 That's positively commonplace compared with what we have here, the Turbo RS spawned by the S quite simply the most extreme expression of the transaxle lineage ever sold. Just four were built by Porsche, this being the only road-legal one and also the fastest by some margin. And after spending most of its life in South Africa it's now for sale in North Yorkshire at a figure officially listed as POA but able to stand comparison with some of the rarest and most desirable 911 variants in the market.

Suffice it to say it's enough to make the astonishing £45K asked for the 944 Turbo we featured as our Hero and the ever hardening prices for 968 Clubsports seem trivial. Here's why it deserves to be held in such esteem...

Rare groove
Rarity will always arouse the attention of the collectors and add a zero or two to the price, but the Turbo RS has substance to back that up too. Rumours persist it was quietly canned when found to be quicker than contemporary 964 3.8 RSRs. This would certainly fit with the perception that Porsche was constantly having to manage the 'problem' of its junior transaxle cars being potentially quicker and easier to exploit than its rear-engined icon. There may be some truth in that but the reality would seem to be more people wanted to race 911s than they did 968s, no matter how much more effective the latter might prove to be. 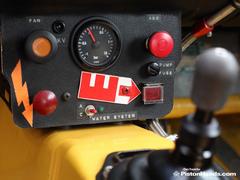 Not many concessions to road use in here!

On paper it's not hard to see how a 968 Turbo S, let alone this RS, might be capable of embarrassing even a 911 3.8 RSR. The 305hp of the Turbo S was a match for the 3.8's naturally-aspirated flat-six, and with 369lb ft of torque from just 3,000rpm it had the mid-range muscle to fully exploit the favourable weight distribution of the transaxle layout.

For the Turbo S Porsche ditched the four-valve head used on the naturally-aspirated 968 Clubsport and instead fitted a two-valve one based on that used in the 944. Augmented by a single KKK compressor boosting at 1bar the oversquare 3.0-litre four-cylinder drove through a conventional six-speed manual with longer ratios and an aggressive limited-slip differential with a 75 per cent locking ratio on both power and overrun. Wheels and brakes came from the 911 Turbo S, ABS and power steering retained to help gentlemen drivers stay the course in endurance racing.

Ready for action
Designed in mind of the ADAC GT Cup the RS took things further still, coming as standard with a fully welded-in roll cage, plumbed in fire extinguisher system, 43-litre safety tank and six-point harnesses. Spring and damper rates were revised again and the wheels went up from 8J and 10J 18-inch items to 9.5J and 11J ones to contain an increase in power to a restricted 337hp. One car raced at Le Mans in 1994 but was forced to retire, the two others built for the ADAC GT series also seeing track action but never quite having the chance to deliver on the expectation suggested by the spec. 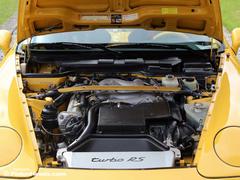 The fourth car and one you see here is one of the two originally converted from S spec, the only one built to be road legal and also the most powerful by far. Numbers vary but it's safe to assume this car is packing well over 400hp, modifications requested by the original South African buyer including a manually operated water spray to cool the intercooler, additional bonnet venting, a larger rear wing and a wind deflector to shield the wipers as well as improve airflow over the front of the car. Interestingly these and other aero parts were originally developed in collaboration with Porsche tuner TechArt before being formally homologated for street use. In a corner of Gmund's office is a pile of bubble-wrapped additional aero parts to be sold with the car and supplied to the original owner to adjust downforce according to requirements. To reduce weight further the pop-up lights were also removed (and kept) with the driving lamps converted into proper headlights. Further evidence, were it required, that this is a racing car first and road car second.

Not that you're in any doubt about that when you look around it in detail. It's got two seats but the passenger footwell is occupied by the boxes for the Motronic ECUs and opening the glovebox simply reveals the cross-brace from the roll cage rather than space to stash your Haribo. A bare gear knob - apparently from a 962 - sprouts from the centre tunnel and column stalk appropriated for manual overboost control and switch on the dash for the intercooler spray hint at the improvised, one-off nature of the build. It's all beautifully done though, fit and finish above average for a race car and indicative of the thoroughness Porsche's motorsport department puts into all its cars. 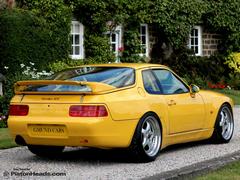 A rare and exciting old Porsche that isn't a 911?!

Given the nature of the car experience of it in action is limited to standing roadside to bag a few hurried snaps on a lane close to Gmund's showroom. And however effective a tool it might be, the uncultured blare it makes from its totally unsilenced exhaust perhaps offers a sense of why well-heeled privateers might have stuck with their RSRs. The sound is raw, brutal and pure race car, with no thought to pleasing harmonics. It's undeniably impressive though, the four-cylinder bark overlaid with a whistle of boost and crackle of overrun as the car runs to and fro for the camera. It's certainly appropriate to the car's intent too; this is a 968 built to do one thing and one thing only.

It carries it off with some style though. All the transaxle Porsches carry a lingering sense of unfulfilled promise forever in the shadow of the 911. But in this RS you get just a taste of the potential Barth and his colleagues knew was there but were never able to fully exploit. There's more than a hint of mischief about it too - the final flicked vees from a downtrodden subordinate after years of toeing the line to its elders and supposedly betters.

And the reflected glory of this rare, valuable and thrillingly raucous transaxle Porsche has the potential to finally drag its contemporaries out of the shadows and permit them to stand shoulder to shoulder with their rear-engined equivalents. That would be a legacy to celebrate and a fitting conclusion to this anniversary year.