So exclusive even McRae had to pay for his, the 22B stands alone as the ultimate classic Impreza

A weird one the Impreza 22B. In some ways it encapsulates all that was brilliant about the classic Impreza. And yet it stands alone, set apart from the tangled evolution of UK and JDM special editions based around regular WRX and STI Imprezas. 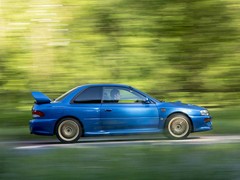 Looks are almost a caricature of fast Scoobys

Literally plucked from the production line, engorged in bodywork and engine displacement and blessed with the most exotic and hardcore collection of mechanical bits ever offered in a road-going Impreza it was - is - the closest you can buy to those classic two-door rallying Imprezas driven by heroes like McRae and Burns. And yet it's not actually a homologation car at all and, other than the looks and inspiration, has no direct bloodline to those legendary rally cars.

Doesn't matter though. For JDM fanboys this is one of the ultimate in Japanese exotica, a proper celebration of all that made the original Impreza such an icon.

Like all hero cars it's a dedicated ownership proposition though. Most folk won't tell it apart from any regular bewinged, burbly, blue on gold Impreza and yet it costs many multiples more, is constructed from bespoke and expensive parts and is harsh, single-minded and relentlessly full-on to drive. 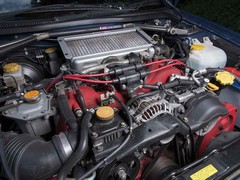 Bigger engine is just the start of the story

It's the kind of car that begs to be driven hard and yet the thought of putting even a scrape on those probably irreplaceable body panels is enough to bring you out in a cold sweat, especially given the owner of this example has asked us to insure it for £50K and is standing nervously beside a twisting Sussex backroad as we circulate for photos, flat-four echoing off the steep-sided woodland bordering a very rally-stage like series of hairpin bends. Basically there is nothing whatsoever relaxing about the 22B, from either an ownership or driver perspective.

The 22B's exclusivity was assured from the start. Originally shown as the WRCar-STI at the 1997 Tokyo show it was offered for sale in production form as the 22B in March 1998 at a Japanese market price of 5m Yen - 2m Yen more than the contemporary two-door STI Version IV Type R on which it was based. The JDM production run of 400 apparently sold out in 24 hours nonetheless, 16 additional cars being built for the UK market, another five for Australia and three '#000' prototypes originally owned by Colin McRae, Nicky Grist and Prodrive's David Lapworth. 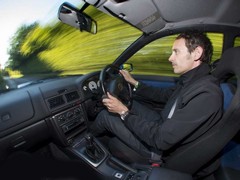 Things get blurry rather rapidly

In a TV interview McRae described it as one of his favourite cars, while admitting "it gets you into bother" by virtue of its character. Mind boggles at what qualifies as 'bother' to a man of McRae's talents and given what he did for the brand you'd have thought Subaru would have been happy to gift him one. But, no, he had to pay for it. "I got a good price but that really hurt, being Scottish!" he said at the time.

Subaru fans will be well versed in what makes the 22B so special but in case you're looking at it and thinking 'so what' here's a quick history lesson. First thing you'll notice is the flared bodywork inspired by the WRC cars of the day and a whole 80mm wider than a standard Type R. Like box-arched Integrales, Quattros, Escorts and the like this puts it in a very exclusive club of rally-inspired road cars. Front and rear valances, bonnet vents and that giant manually adjustable wing were all similarly inspired by, if not exact replicas of, those fitted to the rally cars and on the road it looks a whole lot more purposeful than any comparable Impreza. 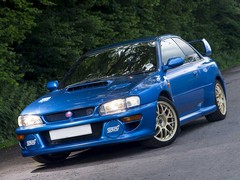 A spot of bother

Mechanically it was just as exotic, bored out to 2,212cc from the regular 1,994cc and designated EJ22 rather than EJ20 as a result. It got the same turbo as the 1997 STI but unique forged pistons and other internal components, the super short gearing the same as the contemporary Type RAs but driven by beefed up drive and prop shafts. Official horsepower as dictated by the restrictions of the time was 280hp with 267lb ft of torque delivered in a fat wedge from around 2,800rpm all the way to 5,200rpm. Redlined at 7,900rpm it wasn't as zingy as the most exotic EJ20s but punched a lot harder.

Suspension used unique forged aluminium lower links, rose-joined transverse links, inverted Bilstein dampers and unique Eibach springs and there were bigger brakes all round, fatter 235 section tyres on 17-inch wheels, a faster 13:1 steering rack and a host of other detail modifications. And a lot of STI branding.

The 16 22B-STI Type UK cars were SVA'd especially for the Scooby mad British market and got a revised 3.9 final drive against the JDM car's 4.444 for "relaxed high speed cruising" (all things relative), mph speedo, Thatcham alarm, MY99 headlights, additional rust proofing and Type UK branding on mats and badging. Priced at £39,950 you'd be hard-pressed to buy one for less today, even if you can find one. 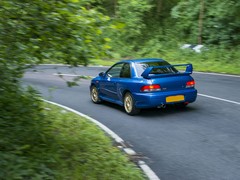 Our featured car is an import though, badged #84 of 400 and in absolutely immaculate and seemingly completely original condition. No wonder the owner looks a little nervy about handing over the keys, though turning up in the PH WRX STI breaks the ice and helps establish credibility as fellow Scooby fans.

Home truths
If the clatter of the glass within flimsy feeling frameless doors and the almost apologetic cough on start-up are familiar to anyone who's ever driven a classic Impreza the heft to the controls and urgency of response is a bit of an eye opener.

Like many JDM specials of the period the chassis is punishingly stiff on British tarmac but with a bit of pace under the wheels it's not entirely unyielding. And it definitely doesn't take long to get a bit of that going. 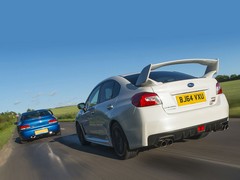 The gearing is bonkers, the acceleration a crazed blur of whooshing turbos, classic Impreza burble and rushed gearchanges. The lightweight twin-plate and part ceramic clutch is racer short in travel and harsh in bite, making smooth getaways difficult. But the gearbox is typically positive and short of throw, which is just as well given how quickly you'll be progressing through the ratios. The extra 10 per cent of cubic capacity and willingness of the engine to rev and boost up means the 22B means even that expanded mid-range is gobbled up very rapidly. And although the redline is nearer to 8K it feels more sympathetic to the engine and the owner's nerves to not venture far beyond the 6,000rpm peak.

Even in fifth gear this equates to rapid road pace, commitment to go much faster than this requiring gritted teeth and considerable mechanical harshness as the engine seemingly begs for the sixth gear that isn't there. 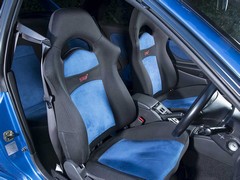 Good job they grip you tight in the corners

Basically you need to avoid roads with long straights and fast sweepers because, in keeping with its breeding, the 22B is all about punching between tight corners and shrinking the distance between the bends it really excels in. The brakes are massively confidence inspiring, encouraging you to pile it in, delight in a front end that's far more positive and accurate than regular Imprezas and the agility that comes from the compact dimensions. Traction is such you'd need a lot of denial to start playing with the balance on the throttle, even with the ability to direct as much as 65 per cent of the drive torque rearwards via the diff switch on the centre console. As it stands the 22B feels adjustable, pivots around its middle, encourages earlier and earlier throttle applications and just digs in and goes. If it feels undergeared and a little breathless on open roads it's an absolute killer when things get tight and twisty, helped by the typically superb visibility and sense of compactness. 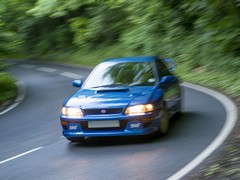 And from the outside the sound is pure late 90s WRC, the engine fiercer and more guttural than any production 2.0-litre Impreza with a properly savage edge to it. From the inside that's almost drowned out by the hissing and chuffing of the induction system, seemingly turned up to 11 like everything else in the car.

It's pretty exhausting and you could make similar progress in - picking an entirely random example - a Golf R without raising a bead of sweat. The less exotic and UK specific P1 is probably just as quick point to point, arguably just as capable and a decent one could be had for a quarter of the price. But in looks, manners and reputation the 22B stands apart and deserves its reputation as the hardest of the hardcore. That it makes you work for it just adds to the hero points.