Volkswagen has built the 300hp Clubsport to take on allcomers. But there's only one car it needs to beat

Here we are again, contemplating the Honda Civic Type R and its jumble of creases and vents and wings, wondering not for the first time whether a new contender might be the one to knock it from its perch. Ever since the rowdy Civic was a hot hatch newcomer back in 2017 I've thought it the very best car of its type, the absolute pinnacle of the 300hp front-driven performance hatchback game - all the while knowing very well I'd never put my own money into one. Although you'll make your own mind up on the way it looks.

Its cabin quality is patchy at best and despite Honda's protestations, it really is a mistake not to offer a customisable driving mode (if you want fizzy engine response you also have to make do with firmer dampers, which unsettle the car's ride on even moderately bumpy roads). But in every other conceivable way the Civic Type R is sensationally good: its seating position is peerless and the seats themselves both brilliantly supportive and very comfortable; the ride in the 'Comfort' driving mode is very good; and the 2.0-litre turbo engine is probably the best of its type - it's a real powerhouse but it also revs beyond 7,000rpm where most don't, plus it's characterful and even quite tuneful - and it's mated to unarguably the best manual gearbox you'll find anywhere in the hot hatch segment.

On and on it goes. The limited-slip differential is so effective you adjust your driving style to make the most of it, stomping hard on the accelerator pedal early in the corner so the diff drags you through to the exit. You can actually feel how much traction there is to call on through the throttle pedal and the steering, so well calibrated are all those components at the sharp end. Grip is mighty, body control is supreme, the steering is communicative and while there's huge stability to lean on at speed, so too is there a playfulness and adjustability about the chassis.

As a machine simply to drive, this Type R is one of the most complete hot hatches there has ever been. That's why it's already seen off the Ford Focus ST and Renault Sport Megane 300 Trophy. Neither one is bad - in fact the Ford in particular is a very fine hot hatch indeed - but the Honda is just better than both. 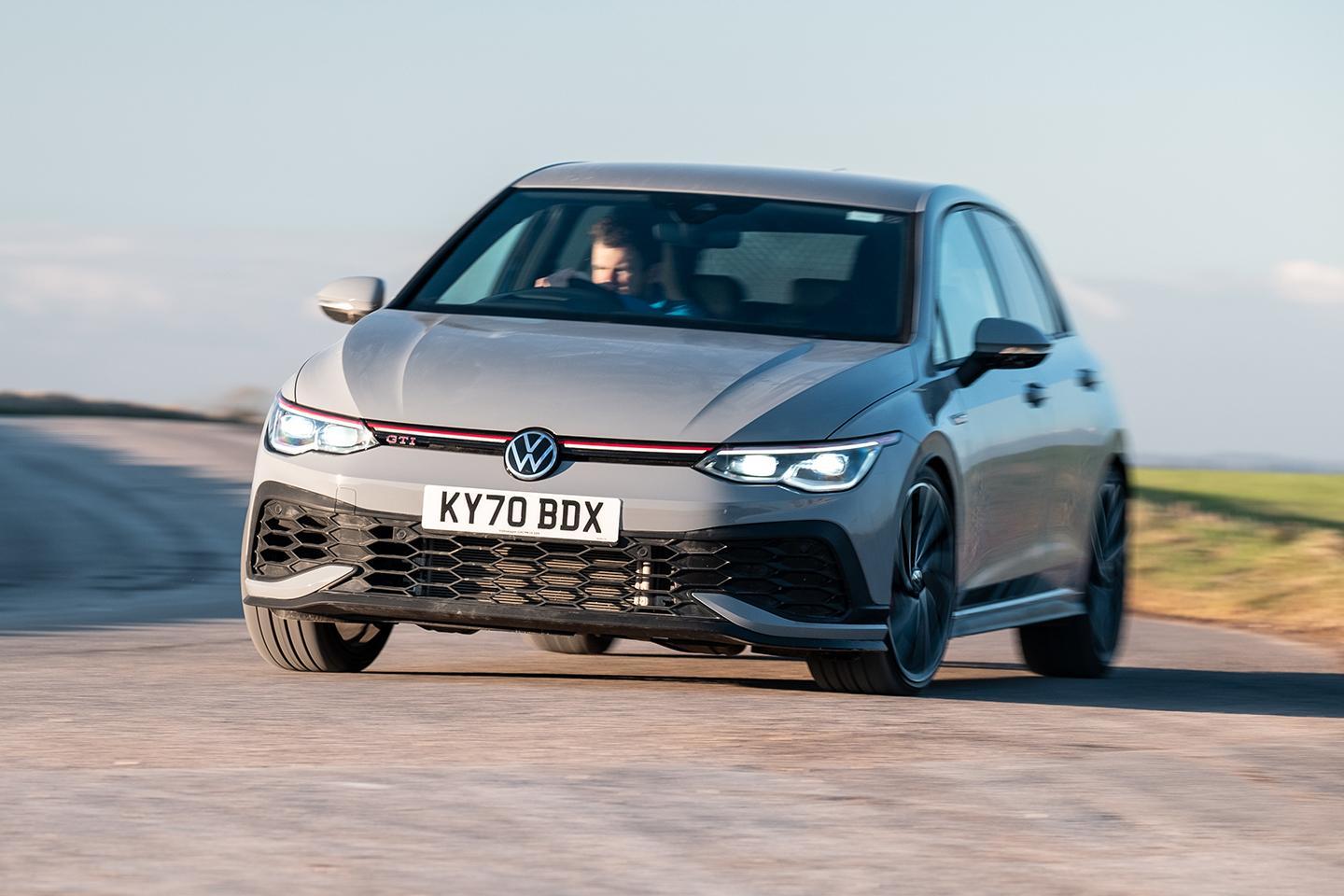 In time, we'll recognise this era as a golden age for this type of performance car. Three titans of the hot hatch category in Honda, Ford and Renault Sport duking it out, all of their present day expertise and decades of fast hatchback heritage distilled into three staggeringly talented machines. Except now it's four, because Volkswagen has hot hatch credentials to rival any car maker on the planet, and in this new Golf GTI Clubsport, a contender that has the potential to eclipse all comers.

Its 300hp puts it slap bang in the middle of the class, not quite matching the Honda's 320hp but besting the Ford's 280hp. There is nothing mediocre about its price, though, because it starts at £37,215 and is the most expensive car of the lot as a result. You'll save almost £3,000 by choosing the entry-levle Civic Type R instead (the GT spec version starts at £36,320). The Clubsport comes armed with uprated brakes, a lower ride height than the standard Golf GTI, more negative camber on the front axle, retuned suspension, an electronically-controlled LSD, a subtle rear wing and a DSG gearbox - there is no manual option.

However, it seems mean to charge an extra £785 for adaptive dampers when you're already paying so much. Honda throws them in for free. Will many Clubsports roll out of showrooms costing less than £40,000? I'd be surprised. At £42,445, this one certainly didn't.

Most significantly of all, this GTI comes armed with its Clubsport designation and all the promise that comes with it. This range-topping model can be a more uncompromising sort of machine because the basic GTI is there to play the all-rounder. On looks alone the Volkswagen's easier to love than the Honda, isn't it? In the cabin you'll also find materials and a level of fit and finish to make a Civic owner weep, plus a very good touchscreen infotainment system. Fiddly heating and stereo volume controls aside this is a decent cockpit, albeit with a seating position and seats that aren't quite a match for the Honda's.

Call it duality, call it breadth of ability - it's what the Type R does better than anything else out there. It looks as though it'll rattle your fillings out, but it doesn't it. In normal driving it's no more demanding to use than any other Civic. But despite that civility, it somehow manages to be faster than its immediate rivals, more talkative, more confidence inspiring and, when you bundle all of that together, simply more fun to drive.

And the Clubsport? It's really very good indeed. Those adaptive dampers are a must have. They offer no fewer than 15 individual settings for firmness, which is many more than you strictly need but I can see the fun in switching between settings six and seven, say, and trying to figure out which is better suited to your favourite stretch of road (the difference between the two will be so marginal I doubt you'll ever reach a verdict, but that's not the point). At their softest the dampers are beautifully plaint, even the very bumpiest roads slipping by beneath you with a fluidity not even the Honda can better. In their firmest mode the body is clamped down tightly, the ride more or less unbearable on typical B-roads but presumably very well suited to the specific demands of a very smooth race track. With those adaptive dampers in place, the Clubsport has the duality we're looking for.

I don't mind admitting to a little burst of excitement upon delving into the suite of driving modes and seeing one labelled 'Nurburgring'. In this setting the car is configured specifically for the Nordschleife, which among other things means the dampers are knocked back a couple of notches from the uppermost 'Sport' mode to better deal with that circuit's bumps and compressions. It means that when configured for the 'ring, the Clubsport is also pretty well suited to our network of back roads. For the very worst stretches you'll want the Individual mode where you can choose the softest damper setting of the lot, but by and large the 'Nurburgring' mode is just right.

However you have the Clubsport configured, there is an edginess about its chassis balance that's both entirely unexpected and very welcome indeed. You can back this thing into a bend like you would an eighties hot hatch, lifting sharply as you turn in or lunging into the apex hard on the brakes to make the car pivot around you. It's even more adjustable than the Honda. But you can just as easily drive it neatly if you prefer, trusting its grip and stability while knowing its wild side is there should you want it.

In fact, this is a car that really responds to your driving style. Clip along without trying to frighten yourself and the Clubsport is quick, composed and secure. You might even think it's a touch too sensible. When you do press on a little bit, though, you find this whole extra level of interactivity, a new strata where the car is balanced on an edge and exciting to toy with. Like the Type R it has a really effective LSD that hauls you through corners, although it doesn't telegraph its work quite so vividly.

The DSG gearbox is faultless, except that it's nothing like as rewarding as a good manual transmission, never mind the Honda's sublime one. The engine is strong, responsive and full of energy, but it lacks character compared to the Type R's and there are none of that car's rewards for chasing the redline. All told, the Volkswagen's powertrain is effective but forgettable alongside the Honda's.

My real gripe with the way the Clubsport finds its way along a road - for all its speed, poise and adjustability - is that it doesn't steer with any real clarity. You can lean hard on the front axle, but whereas the Civic's steering draws you into the process of driving and connects you instinctively with the car beneath you, the Golf's more muted rack keeps you at arm's length.

I have no doubt this is the Golf GTI you'll want if you really love driving. But if that's what you prioritise above all else, you would honestly have more fun in the Type R. That's yet another scalp for the Honda, then, the Golf GTI Clubsport swept aside and left crumpled at its feet alongside the Focus ST and Megane 300 Trophy. I'm beginning to suspect this Civic Type R will be retired before it's outboxed.