A few ticks on an M4 order sheet swiftly take it to GT-R territory; can it compete? 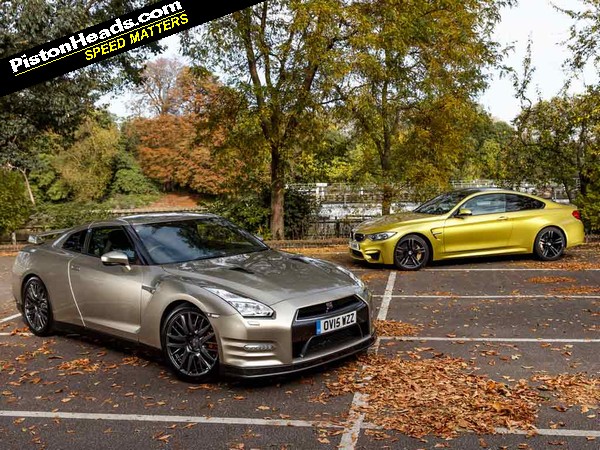 This was a twin-test that entirely came out of coincidence. The beige - sorry, Silica Brass - Nissan GT-R seen here is a 45th Anniversary car, booked in because any anniversary of the GT-R legend merits celebration. 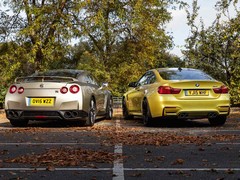 A quick glance at the spec sheet revealed that this GT-R, surprisingly for a press car, arrived completely standard, with a list price of £79,780. A lot of money when you consider the first cars arrived here at less than £60K, but still appearing to represent very good value for the power and technology on offer. That list price is just £5,910 more than the PH Fleet

, heavily optioned as it is with carbon ceramic brakes, dual-clutch gearbox, head-up display and so on. It's an indulgent specification but not entirely unrealistic, 'our' car doing without optional paint, the Active Security package and Comfort Access.

All of a sudden there's a twin test emerging. Can the BMW's more modern twin-turbo six and dual-clutch auto teach the GT-R something? How does rear-wheel drive with some very clever electronics compare with four-wheel drive? Can this test be completed without some reference to interior quality and plastics? To the road!

There's an Audi Q5 diesel owner probably still talking about the time he outdragged a Nissan GT-R on the A3. Seeing him join from a slip road while mid-overtake, I aimed to squirt past and move back over to the inside lane. But there's nothing. A bit of throttle, more throttle, a lot of throttle. No squirt, no moving back over. The Q5 has completed his bolshy, aggressive undertake and is off, no doubt chortling about how amazing his 190hp really is. 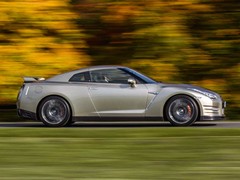 Point being the GT-R does have some turbo lag, which makes it rather less effective below 2,500rpm. Especially when you've selected manual mode, meaning it won't ever, ever kick down... But lag is exciting, it's something to manage and something to deal with.

Beyond 2,500rpm or so the Q5 wouldn't have stood a chance. Hopefully. The years since the GT-R's introduction have slightly dulled the impact of its numbers but this 550hp standard car remains brutally quick. The turbocharged rush when it does arrive is bombastic and loses none of its urgency as 7,000rpm approaches, speed piling on in huge, intoxicating waves with each gear. It shows the march of progress that this powertrain almost feels like a slightly old-tech installation now. Amazing.

But what the old - all things being relative - methods bring is character, and the GT-R has it in spades. With just the right amount throttle in auto, you can get a spike of boost before a gearchange at 3,000rpm or so. Roll on a gear higher than usual and just feel that boost swell and career you down the road. Or take a gear lower than you need and watch the world become a haze. 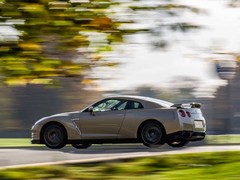 Despite an apparent obsession with numbers, the key to the GT-R's appeal is how well it delivers on the subjective, intangible elements. Those who continue to dismiss it as some kind of PlayStation on wheels couldn't be further from the truth. It's a truly immersive and very rewarding drive.

The GT-R's electro-hydraulic power steering system is excellent; lucid and feelsome, the aggressive setup makes the wheel wriggle in your hands as it tracks this way and that. It weights up with load and never leaves you in any doubt about what the front (or indeed the rear) wheels are doing. Here the GT-R is comfortably ahead of the BMW and its all-electric system.

The heavier Nissan is better damped too, the Bilstein Damptronic system controlling mass and movements more assertively. In the Comfort mode it nails that neat trick of absolute control with just-about-sufficient fluidity too. Of course it doesn't glide like a Lotus but the non-believers will find a lot more poise than expected. It's massively confidence inspiring where the BMW can feel vague and disjointed. Just leave the other modes for track. 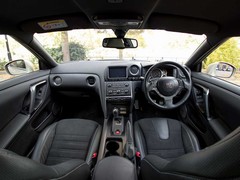 Functionality over pizzazz inside too

The four-wheel drive is intuitive and exciting, proactively distributing power rather than waiting for an end to lose purchase. The brakes are superb, the various noises are very cool and it's so damn fast. Though that may have been mentioned already.

The key to remember is that the GT-R is so much more than a one-trick pony. It's quicker than very nearly anything else on the road but more engaging than them too; precise, freakishly agile, communicative, thrilling and meticulously well engineered. Sure, the interior isn't up to much and it's hardly the flavour of the month, but to discount the R35 on grounds of familiarity is a foolish move. This remains one of the great driving experiences.

Look for a used Nissan GT-R in the classifieds!

While PH exists as a voice for the real car enthusiasts, it's easy to see how some vanity and luxury could swing a buying decision. We're all guilty of it. The best cars are those that can effortlessly switch between city crawler and track tearaway with a bit of badge appeal on the side. On the face of it, the M4 should be that car. 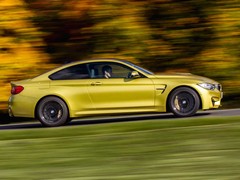 You want aggression? M4 has it!

Certainly the BMW will initially impress more than the Nissan. It's way more stylish inside and out, the seat drops you lower and hugs tighter while all the interfaces feel at least a generation on. As a feel good experience at low speed the M4 is better than the GT-R. Simple as.

Over 30mpg is realistically achievable, the dual-clutch works better both around town and at maximum attack, there's a lot less lag... you can see where this is going. The M4 is the easier car to get along with, while also appearing to make its performance more accessible.

However, the old Nissan can still teach M Division's latest about ride and handling, and excitement too. As mentioned, none of the BMW's three steering modes can match the Nissan's, or come close in fact. The BMW lacks the GT-R's incredible ability to deal with bumps under braking or mid-corner as well, further undermining confidence that the quite spiky power delivery has already put on edge. While ultimately the M4 can probably carry more speed than you expect, those messages telling you it's OK to push on never materialise; it's a leap of faith that's quite intimidating with 406lb ft, an aggressive limited-slip diff and two-wheel drive. 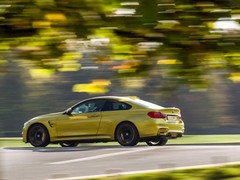 Don't misunderstand; the M4 is excellent in the right environment, namely when it's warm, smooth and dry. Traction is very good, the balance between front and rear grip is excellent and when it does oversteer it's smooth and fantastic fun. With the engine in its wickedly responsive upper reaches and the gearchanges instant, the M4 is an enthralling companion.

But as discussed before, it doesn't reward sufficiently at road speed and more modest commitment levels. The engine can feel ordinary, the steering is numb and the whole experience can feel a bit flat. This in stark contrast to the GT-R, which carries off the neat trick of great involvement without making the driver feel overawed.

While the BMW lacks the GT-R's savage outright pace, it isn't far behind. The immediacy of the throttle response is on another plane, but combined with such ferocious torque at low revs is what can make it unsettling on occasion. Further up the rev range it feels much more naturally aspirated, willing and eager in a way the GT-R simply can't match. Furthermore, now we have the fake noise fixed it might even sound better. 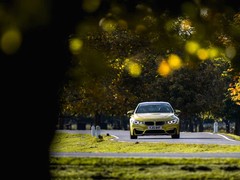 Out of its depth or punching above its weight?

Motorway journeys swing the balance in favour of Germany, the taller gearing and more intuitive infotainment making longer trips that bit more comfortable. The Nissan isn't terrible here, it's just that the BMW is better. The Nissan's seat in particular feels curiously high and overstuffed after the excellent one found in the M4.

There's little doubt the BMW's take on the twin-turbo, six-cylinder and four-seater (ish) coupe outdoes Nissan's in certain key areas. But are those enough to take a victory?

Look for a used BMW M4 in the classifieds!

This conclusion requires a couple of qualifiers in the BMW's favour. Firstly, it's worth remembering the BMW is ostensibly a sub-£60K car, one that should cost £15,000 less than the GT-R even with a few desirable options. It's only through an extensive options raid that these two are in the same ballpark, and we wouldn't typically call them close rivals. 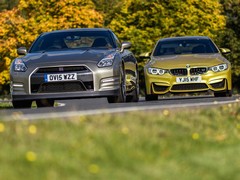 Nissan ahead on the road and the final ranking

The second is that this time of year really does not favour the BMW at all. It simply isn't at home on wet, bumpy autumnal roads. Not ideal for UK roads but the fact is inescapable.

In the end the conclusion is a relatively simple one, even if it pains a lifelong M fanboy to write it; the costlier and faster Nissan is more exciting, more involving and more rewarding, more of the time. The advantages the BMW holds in terms of everyday amenability, perceived quality and refinement are nowhere near as great as the Nissan's dynamic victories. Sure, the engine in the M4 feels more modern but, as we're coming to learn, that's not always as appealing as it may sound. Fickle bunch.

Let's deal with some of issues M4 supporters will no doubt have at this verdict. On top of that list price advantage the BMW will be a noticeably cheaper car to run too; the aforementioned fuel consumption for example, along with cheaper consumables (remember Nissan prefers you to replace four tyres at a time) and much lower emissions. And every day the more luxurious, user friendly M4 could prove better company.

But if you can afford to run one for any period, however short, the Nissan GT-R is simply the better car of this pair by the criteria we care about. It may not be the freshest or the most stylish car around, but it remains one of the best. Just don't go for beige.