Can Porsche really turn the Panamera into a pukka track car? Does it really matter if they can't? 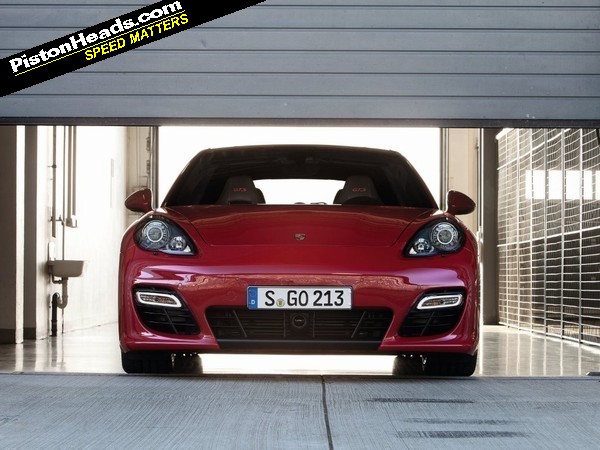 This, they say, is the Panamera you buy if you want a track car that's also, er, a five-metre saloon. And if that sounds a little odd to you, well then you'd not be wrong.

But to prove the track-capable point, Porsche has chosen to launch the new Panamera GTS to the world's press (and yes that includes us) at Ascari Race Resort in southern Spain. So what exactly has Porsche done to the Panamera to make it into a track fiend? 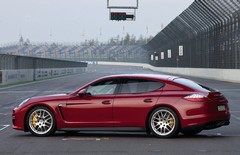 A Panamera for the track? Apparently so...

The modifications are pretty subtle, but also pretty extensive. It starts with an extra 30hp from the 4.8-litre V8 along with 16lb ft of torque. In part this comes from an extra 400rpm, courtesy of modified valve springs, bringing the red line up to 7,100rpm, and in part thanks to a wider air intake with two new air filter housings on either side of the nose. A larger-diameter sports exhaust system also helps the engine to breathe more freely and, completing the engine-room trickery, there are tweaked camshafts with a modified valve lift.

The PDK gearbox (standard on the GTS) also gets a massage, with the gearbox working in concert with cylinder deactivation technology to create faster upshift times. 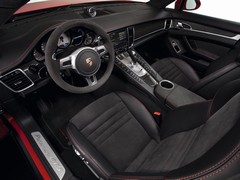 Alcantara seats among the upgrades

The chassis hasn't been ignored either, with PASM active air suspension as standard, and a ride height lowered by 10mm over the 4S on which the GTS is based. A 5mm spacer inside each rear wheel also increases the track by (wait for the complicated maths) 10mm, while 19-inch wheels from the Panamera Turbo hide the 390mm (front) and 350mm (rear) brakes also from the Turbo (carbon-ceramic items are optional). Porsche's Sport Chrono package is also standard, while Porsche's clever active chassis control system (PDCC) and torque vectoring are optional. Oh, and the production models get proper paddleshifts as a no-cost option as opposed to the irritating push-me-pull-me Tiptronic-style toggles that for some reason most of the launch cars were fitted with.

Cosmetic tweakery includes various GTS badges (inside and out), a smattering of black Turbo-sourced trim bits (exhaust tips, various air intakes) and seats that are a pleasant leather-Alcantara mix. 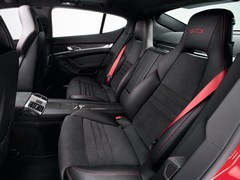 Rear seat passengers looked after too

Out on the track all this translates to a pretty convincing package, especially for a car lugging around 1,920kg. The snowstorm of Porsche acronyms (PTM, PASM, PDCC, PTV-plus, even PDK) all contrive to enhance rather than detract from your experience, coming together with an inherently well-balanced chassis to get the big Porsche around the challenging Ascari track with more verve than a car this big has any right to.

Sure, you'll kill the brakes (even the ceramic ones) pretty quickly with sustained lapping, but you'll have plenty of fun until then. You'll also be accompanied by a lovely growling, gargling soundtrack, which is augmented on the GTS by a 'sound symposer' that channels extra intake noise into the engine via, of all things, the A-pillar. Yes, it is an artificial augmentation, but it doesn't sound like it - it sounds good. 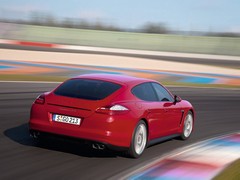 Panamera GT3 it isn't but it's not out of sorts

But no matter what Porsche says, we're pretty convinced that even this most hardcore of Panameras is not going to venture on to many circuits in the hands of the vast majority of its owners. It is fortunate for Porsche, then, that the Panamera GTS is also a pretty epic proposition out on the road.

The extra 30hp and 16lb ft give it just enough shove for it to never feel lacking in sufficient straight-line pace, while on-road driving reveals a delicious pop and crackle on the over-run in sport-plus mode that, although evidently artificially engineered, does sound deliciously naughty.

Best of the bunch?
That 10mm increase in rear track width, meanwhile, gives just a sniff more stability, an ounce or two more eagerness on turn-in. It's enough to be noticeable even without back-to back comparison with a 4S, and also to counter the helm-dulling weight of the front half of the four-wheel drivetrain. It is, in short, a hoot on the road for something so large. Heck, put it in a soft suspension setting and it even rides pretty well (weight and a long wheelbase no doubt playing its part there).

In fact we would go so far as to say that it is the best Porsche Panamera - the one that strikes the best balance between pace, practicality and handling. And if you consider that the £7K leap you need to make to get from a 4S to a GTS is more than made up for by extra kit, some of which (that extra power, for example) you can't spec a 4S up with anyway, that £90K price tag doesn't seem so laughable.

Being the best Panamera doesn't mean being the best super-luxury saloon-type thing: when there are cars like the new BMW M5 around, with 560hp available for £73K, the Porsche suddenly looks a little less tempting. Or what about the new Mercedes CLS63 AMG? That's 525hp for £83K. Both of these are deeply talented - and seriously rapid - cars. If that Porsche badge is not a must on your fast saloon, you'd have to say there are better places to take your money.

Epilogue
Porsche very kindly laid on some clever in-car video footage for our time on the track. They also laid on a 'here's one we prepared earlier' video - with one Walter Rohrl doing the same thing. So for your amusement we've decided to show you the two laps side by side. Rohrl versus Riggers. Clash of the titans this was not...