Home/Features/Features/Factory Tour: Behind The Scenes At McLaren

Factory Tour: Behind The Scenes At McLaren 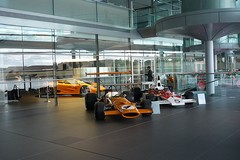 Can you spot an SLR? We can't either

It's extremely hard to believe that McLaren Automotive is a British sports car outfit. Its meticulously spotless Woking HQ, the professional air of quiet, assured efficiency, the fact that the new production facility for the MP4-12C is three weeks

It's all rather at odds with the traditional pencil-behind-ear, garden shed image of the small-volume British sports car industry. McLaren is serious about making sports cars and it shows. When you visit, there is the sense that McLaren has thought of everything, and that it knows that its plan to build 4000 MP4-12Cs a year cannot be anything other than a resounding success. It's something I've only ever experienced before with German or Japanese manufacturers. Let's not call it smugness or arrogance - let's call it quiet confidence. 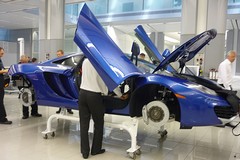 We're here at the McLaren Technology Centre basically to piggy-back on the product presentation and facility tour being given to dealers, as it's a great chance to get close to the new MP4-12C and the people who will be making it.

Having been ferried to the MTC reception past the mound of earth and large concrete-filled hole that will become the factory for the new car, we're ushered to a tea and coffee stand, around which are clustered several McLaren F1s (no Mercedes McLaren SLRs in sight), before we file off to a room for a presentation on the car. 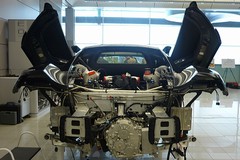 I won't go into great detail about the new Macca - if you want that, you can read our

original story on the MP4-12C

(!) - but a chat with Christian Marti, McLaren's regional director for Europe, reveal some fascinating insights into the attention to detail, technology and focus that's gone into the car.

The carbon fibre monocell, for instance, (a naked example of which is displayed next to the car) is an utterly astounding piece of engineering. It weighs less than 80kg, and is a one-piece moulding. Thanks to the clever design of the front and rear aluminium subframes (which are bolted rather than bonded to the carbon central monocoque), the Carbon fibre tub is all-but indestructible. McLaren was even able to re-use a single tub during crash testing. 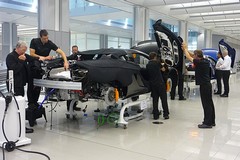 Another intriguing aspect of the car is the absence of anti-roll bars. Instead, hydraulic fluid is pumped around the dampers. The result, says McLaren, is more adjustable, and helps to deliver the highest levels of lateral grip of any road car as well as being 'more comfortable than a BMW 3-series' in terms of ride quality. Crikey.

But if you really want to get a handle on how much thought has gone into the MP4-12C, muse on this: McLaren has developed an entirely bespoke air conditioning system for the car, because the narrowest existing system is 2cm too wide. This would have meant a wider centre console, a compromised driving position, and a wider and heavier car. So McLaren built its own air-con. 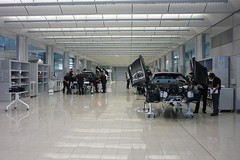 The same unbelievable lateral thinking goes into every aspect of McLaren Automotive. Take the size of the new factory floor. As factory boss Alan Foster explains when he shows us around the current assembly floor - where the final-phase prototypes are currently being built, and where the first four months-worth of production will take place. The new factory assembly hall will be 99x198 metres, he say, rather than 100x200m. Why? Because with the particular tiles McLaren is using, these dimensions mean it won't have to cut any to make the factory floor, saving time and money. Clever.

The factory floor as it stands is pretty impressive. It's small, and there are currently only five cars in build, but everything is sparklingly clean, and everybody working on the cars seems relaxed and focused on the job in hand. It's more like a scientific laboratory than an assembly hall. 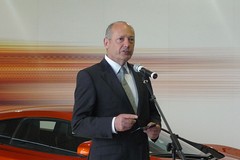 There are similarities with the better high-volume car assembly plants, however, most notable of which is an adherence to the mantra that 'no fault is fed forward'. If one of the technicians finds a fault, they fix it there and then, rather than when it gets to the end of the line. There are also electronic ID swipe cards at every station, so that everything - at every stage - done by anyone is carefully recorded.

With the memory of such diligence of design and build fresh in our heads, the bullish confidence of Ron Dennis - who says a few words to us before we are shuttled back to the 'real world' - doesn't seem at all misplaced.

"To win, you have to be the best," he says. "So we are bravely, and without flinching, investing in our future. We will bring the same level of effort and focus to our customers as we do to winning Grands Prix."