The best cars Alfa and Jaguar make might be SUVs - but which is better? 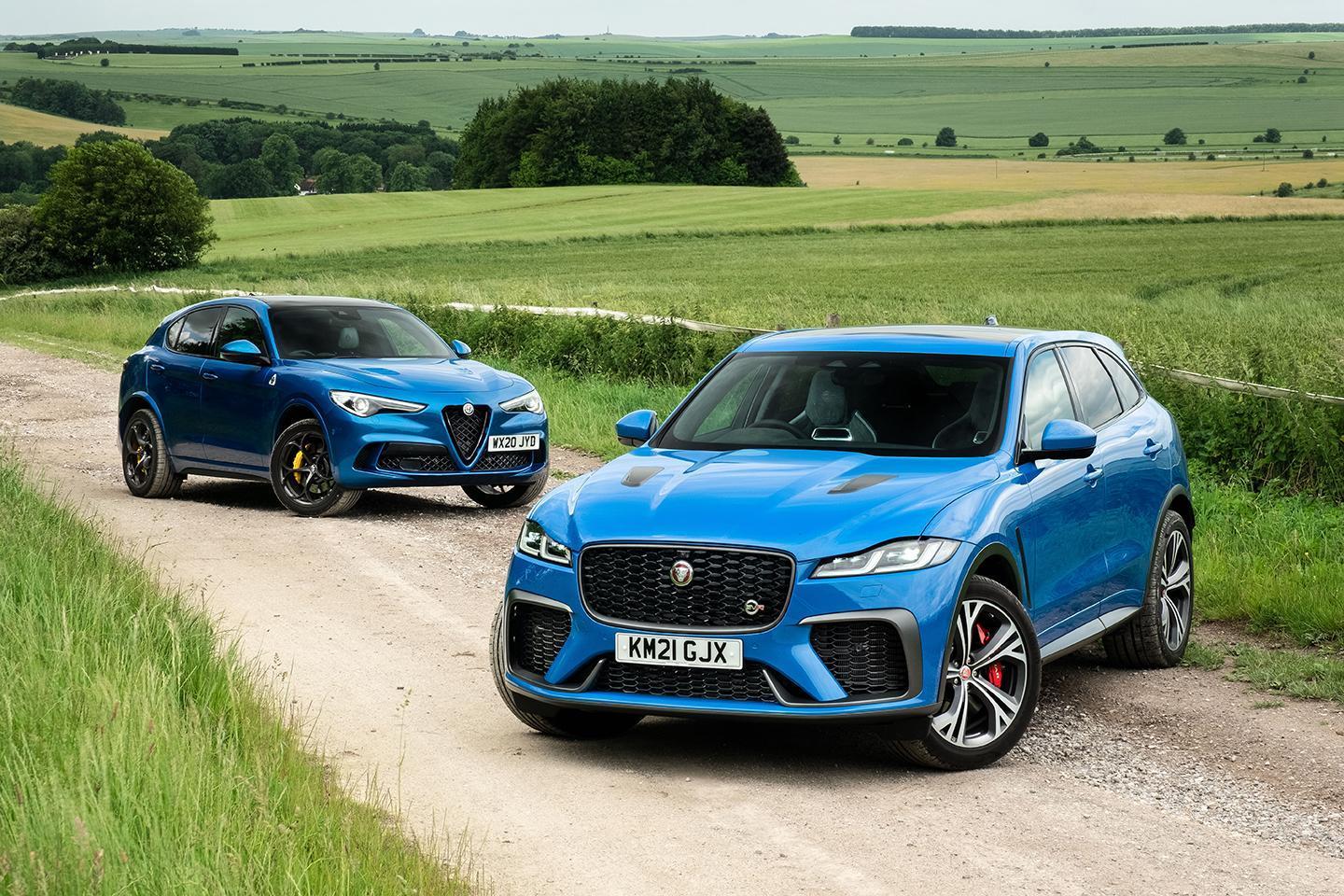 Despite rousing soundtracks and mighty performance, neither the Stelvio Quadrifoglio nor the F-Pace SVR met with universal approval at reveal. At least not from the die-hard Jag and Alfa enthusiasts. For them, it was an opportunity (however slim) to create the mega wagons of old - an XF SVR Sportbrake, for example - and deliver cult icons in the process. SUVs just weren't what these manufacturers did, after all; much better to play it safe with the established niches.

Then the world drove the F-Pace and Stelvio. Far from cynical marketing ploys to cash in SUV popularity, it turned out the SVR and Quadrifoglio were capable, gratifying performance cars in their own right. Those after handsome, fast, all-weather family buses were amply served by both; those who actively sought great driver's cars - or didn't fancy anything German - would also have been extremely satisfied with either. Neither were perfect, yet both Alfa and Jaguar were also more than good enough to overlook foibles.

Now both have been updated to face the BMW X3 M, Mercedes-AMG GLC 63, either of the Porsche SUVs and whatever else may have been launched in the segment between writing this test and publishing it. The changes aren't drastic - particularly in the Alfa's case - with the same power outputs as before and much attention paid to the inside, but given most criticisms beforehand were levelled at perceived quality that's probably no bad thing. Precious little, really, needed to change about how these two drove.

Little has been altered about how either looks, too. By and large that's fine, given these are two of the better turned-out performance SUVs. That said, the Jaguar's sheer size means even 21-inch wheels probably don't fill the arches as they should, and the Alfa isn't without an awkward angle. It's possible they both looked better pre-facelift, neither the Stelvio's tinted taillights nor the F-Pace's more aggressive front end working any transformative wonders.

Consequently, it's the respective interiors that separate the two. The Stelvio's revisions are minor when they needed to be major, amounting to little more than a slightly larger touchscreen with smartphone compatibility. And, frankly, its cabin ambience, quality, aura - whatever metric you want to measure it by or term you wish to call it - isn't good enough for an £80k car. Plastics are scratchy, controls are fiddly, the displays little more than fine. It would only just pass muster in the standard Stelvio so is a real issue here.

The Jaguar's cabin steamrollers over it. With Pivi Pro now equipped and operating through a large, vivid screen, and the architecture liberally tweaked, the F-Pace SVR now has an interior befitting of its billing and price tag. The touchscreen is intuitive, the materials rich, the balance between luxury and sporting intent near perfectly struck. The only real downside is the new shifter; gone is the pistol-grip of old, replaced with an Audi-style anvil atop the transmission tunnel. Fortunately the chunky metal paddles remain, though even those are made to feel puny and inadequate next to the enormous aluminium slivers lurking behind the wheel of the Alfa Romeo. Unfortunately, even those tactile treats can't save the Quadrifoglio from having easily the least inviting interior here.

It's fortunate for Alfa Romeo, then, that this Stelvio remains such an obscenely entertaining car to drive. A Quadrifoglio scaled down to 80 per cent would make a compelling hot hatch, such is its irrepressible nature and infallible ability to entertain; as a full-size, two-tonne SUV, the Stelvio's capacity for mischief is borderline remarkable. If Porsche showed that SUVs could handle, Alfa has made certain that they can raise a smile as well.

Despite the addition of hundreds of kilos and a driven front axle, the Stelvio has retained the Giulia's beguiling immediacy, deftness and agility. (Or the impression of them, at least - a direct back-to-back would obviously highlight the saloon's advantages.) But the notable characteristics have successfully transitioned, which so seldom happens. It means you drive the Alfa like a conductor leading an orchestra, with short, sharp and precise direction. The brakes aren't going to win any awards for subtlety, but the rest of the car is beholden to impressively small inputs. From behind the wheel you wouldn't change a thing.

Enough has probably been written about the 2.9-litre motor already, yet it's hard not to be effusive about the V6. Sure, it can seem a bit muted at slow speeds and doesn't have the unmistakable aura of Jaguar's V8. But it's still arguably the most exciting turbocharged six-cylinder engine out there, eclipsing BMW's efforts and probably even Porsche's too, revving with so little inertia and boasting a fizzy, exciting, gruff yet endearing soundtrack. It really makes a virtue of its auto-only status, moreover, with tightly stacked ratios and an upshift parp to savour. Makes you wonder how many similar powertrains are so uninteresting when Alfa has it nailed.

Much as it does in the Giulia, the combination of this engine with that chassis works its magic brilliantly at eight-tenths. There isn't an SUV with a more rewarding driving experience when in 'Dynamic' mode. The Quadrifoglio has the body control and poise of something far lighter, a mid-corner balance that belies its silhouette and the ideal blend of traction, grip, and power. It feels impressively - perhaps even wantonly - adjustable on-throttle, and improbably light on its toes compared with the F-Pace. Of course other like-minded SUVs are capable of replicating its cross-country pace, but none do such a good job of coaxing you into tarmac-rally-driver mode.

Partly as a result of its bullish nature, it's no surprise to learn that it can't hold a candle to the new F-Pace for a calmer, more measured progress along a country road. It would be wrong to call the Jaguar subdued because, as ever, the 5.0-litre V8 is like toting round a sawn-off shotgun (quick on the draw, explosive) but where the Quadrifoglio isn't concerned about beating you up a bit at urban speeds, the SVR is much easier to rub along with. And, crucially, it's an approach that is no less satisfying in its own way.

Much like the job done by Alfa with the Stelvio, Jaguar's most signature triumph is migrating the dynamic traits of its saloon cars into a two-tonne 4x4s. For the F-Pace that means the same carefully measured steering feedback, effortless, dextrous flow with a road regardless of surface (helped here by not having the biggest wheels) and authentic feel that the ever so slightly contrived Alfa lacks, however endearing its big hot hatch feel is. The SVR drives like the best big Jag saloon you could imagine. Which is some praise to bestow.

The manufacturer has done a good job of sharpening up the latest model, too - one of its key metrics was chasing the more aggressive handling paraded so well by the Alfa, and its increased spiritedness is admirable. But it can't fully overcome the slightly more compact Stelvio's circa 200kg weight advantage, nor the presence of a larger engine forward of the bulkhead. Its behaviour through a sharp bend makes the V8 feel a yard distant of where Alfa has positioned its shorter engine, and, try as it might, the F-Pace can't replicate its bravura-grade turn-in. If the Stelvio is the car to finely adjust and agitate with precise inputs, the Jaguar far better suits slow in and heroically fast on the way out. Which means that more often than not, you're coaxing it into silliness, rather than the other way round.

But here's the thing - on the road there's precious little separating them. In part that's due to the enormous grip and braking performance that's behind the Jaguar's subtler, softer controls - but also the way that the V8 hurls the F-Pace along a road. The supercharged unit perfectly suits the SVR's way of doing things, trading on bountiful torque for effortless, immense performance. Given everything, the Alfa probably is the faster car, though who drives like that? In typical Jaguar fashion, the F-Pace is always fast without ever feeling like much fuss is made about it, knowingly relying on its rich, rude, and mellifluous soundtrack to gratify its audience. Whereas the Stelvio ravishes and shouts its way round a one-way system like a sun-burnt football fan.

The respective and considerable talents of both ultimately make them hard to prize apart; 20 minutes will make you think the Alfa's way of doing things is preferable, only for many miles in the other seat to convince you that Jaguar is unequivocally superior. On the day - a day inevitably richer with scenic B roads than most journeys - the Alfa, by virtue of its smaller size, lighter mass, and more energetic engine, is the more thrilling drive; so much so that there are one or two sports cars that could learn something about enjoyment here. It's the SUV that could well have you out of bed early on Sunday morning, just for another go.

In good conscience though, it cannot be wholeheartedly recommended over the new F-Pace. The Jaguar might be less absorbing and immersive to drive with your hair on fire, but it's really not far off despite its drawbacks. Add into that its extra space, vastly superior driving environment and plush motorway manners and the case it presents really is undeniably strong. The SVR was always a likeable car, let down by a few details; this facelift has extracted the best from it almost across the board - which means that you absolutely shouldn't buy one of the usual suspects in this segment without driving the F-Pace first. That is, unless there's already a Stelvio Quadrifoglio on the driveway. You legend, you.