Home/Features/Features/Jaguar XJ220 - the inside story

Jaguar XJ220 - the inside story

Professor Jim Randle, former Jaguar director of engineering, takes up the story, which starts in the early 1980s. “Sir John Egan had been tasked with demonstrating Jaguar was still in business and could independently survive.” A work level “bordering on the unbelievable” ensued for every director, selling the Jaguar brand and “inventing a believable product plan – which we didn’t have… but so good was our deception, BL believed it!” After six frenetic months Jaguar was privatised in August 1984. “We were then told to make it work.” 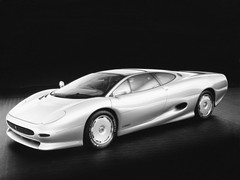 In Randle’s words, this meant “selling the sizzle became more important than selling the sausage”. Jaguar needed to get its pride back. More was needed than just new models like the XJ40. In stepped Tom Walkinshaw, who convinced the board he could win in ETCC. With the XJ-S, in 1983, he did. The workforce loved it. Later, he would do the same with Le Mans. But Randle had another idea: produce a road-going supercar designed to race in the fledgling Group B championship being mooted by the FIA. “I spent Christmas 1987 thinking about what we could do, and ended up with a CAD model, which I still have.” CAD for Randle is, it should be noted, cardboard-aided design…

“Intentionally complex”
This was given to the styling department. “Put a frock on it, make it echo the XJ13.” Randle also deployed an unwritten understanding with suppliers such as FFD, QCR, Triplex. If they did work, and it worked, they’d get the work. He wrote an internal memo, requesting volunteers to work, in their own time, on a supercar project. 12 people signed up, forming ‘the Saturday club’ and giving Randle “the opportunity to do the job without any money.” 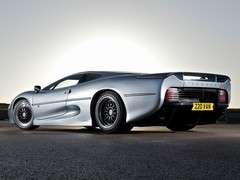 “It was intentionally complex: four-wheel drive, rear-wheel steer, variable aerodynamics so it could ‘drive-to-race’, though being a downforce car it would have to lower by a few inches from road guise. The aero was to produce 1,360kg (yes, you read right) of downforce at 220mph – although, what tyres could manage such forces? They remained a problem throughout the entire programme.

“The V12 engine was originally designed by Walter Hassan in the 1960s. It was developed with Cosworth and raced in 1986, and a road car study discovered it was powerful, but uneconomical. It wasn’t carried on, but we were able to steal one of the five development engines for our concept.” Cue one 700hp 6.2-litre V12 engine, complete with driveshaft running through the open vee.

Just one of many clever innovations. “We designed the rear-steer system not for cornering but to put yaw damping in the system. Suspension was relatively conventional but, as it was height-adjustable, we accounted for caster change constraints.” The bodywork was 4000-series aluminium, with an FIA roll cage buried within the structure. “It had astounding crash performance.”

Keith Helfet did the styling, “knowing I was going to lose, how can to better the old cars?” But he went ahead, using the XJ13 as inspiration. Within the constraints of a design “that couldn’t be fully oval as we had the constraints of the Group B aero stuff”, he aimed to replicate Malcolm Sayer’s design language of form being all, getting acceleration into the design, “making it look fast standing still.” 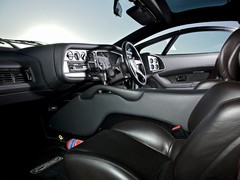 Making it work was a real test of mettle

It was an aero-led shape. “I didn’t want flame surfacing and feature lines, but shapes that made sense.” Jaguar couldn’t afford a full-scale model, so everything was done in quarter-scale. It was tested and honed in MIRA’s new wind tunnel, and this optimised model became the final car. “It was scary – the thing looked the size of a house. You can’t scale the sense of scale! I actually felt guilty, too: we’d made the aluminium body panel beaters’ job so hard. Luckily, they disagreed and said it was the highlight of their careers – they’d never been stretched so much.”

More late nights
And so, 10 months after the project started, the 12-strong team wheeled the car direct from its press material photoshoot into the 1988 NEC Motor Show at 3am on opening day. “One of the team found six bottles of Champagne. At 6am, we all went home worse for wear.” The crowds flocked in, your 10-year-old writer was squashed by them, Ferrari became increasingly desperate to draw attention to the F40 parked next door (“They moved the car, then got an attractive lady, who then started taking her clothes off – still nobody turned around.”), an extra 90,000 people visited the Birmingham show just to see it – the XJ220 sizzled alright. 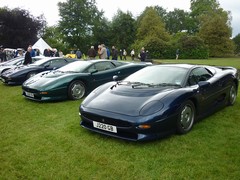 Under appreciated, is the XJ220 due a revival?

So that was the concept. It was a bold Jaguar board that agreed to green-light it, targeting a 1992 launch just three years hence. And, with no racing intent in mind, it was a focused project engineering team that led to the road car makeup which disappointed so many.

Engine? The Metro 6R4 V6, a shortened Rover V8 whose design had since been sold to TWR. It had racing pedigree (in the Group C cars), it was powerful, it didn’t weigh loads. But for the V12 promise, it was ideal. The Porsche 959 could get away with a six-pot turbo, so why not Jaguar? As for four-wheel drive, it was heavy, compromise-laden, unnecessary: it went. Rear-wheel steer, height adjustable suspension and active aero followed suit. All were sound engineering decisions that created a lighter, faster, more able car than would otherwise have been the case.

Cut and shut
Helfet knew the car had to shrink. The V6 allowed it to. “This was before the days of Photoshop: we ‘cut and shut’ photographic prints to get the proportions of a smaller car. I’d have liked it shorter, but Tom [Walkinshaw] wouldn’t have it.” Bigger openings for the turbo intercoolers were created, but the XJ13-inspired glass engine cover was retained, as was pretty much everything else from the show car. Which in itself is remarkable. Few realise they are so very different. Few realise the show car was never designed to make production. Underappreciated is the fact it did at all. 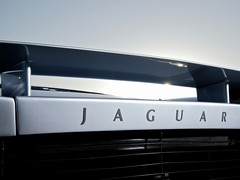 The Jaguar supercar could be due a revival

Production ceased in 1994, 281 cars into the planned 350 total, with a fizzle. Yes, history is unkind to the XJ220. It was, at 213mph, the fastest car in the world, despite being developed on a shoestring at breakneck speed. The recession, the no-V12 fallout, the court cases from aggrieved owners, all shadow what is a pretty stunning accomplishment: an automotive minnow turning a race-inspired piece of conceptual engineering brilliance into a roadgoing reality that beat every other supercar on the planet. 20 years on, it’s time we celebrated it.