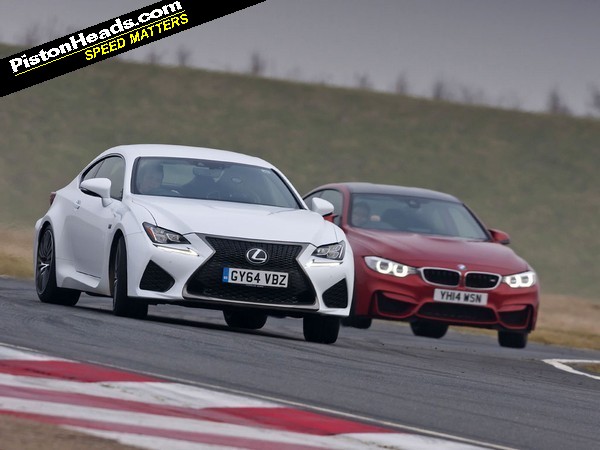 Never pick your favourite before the test begins. But it's tough isn't it? Faced with two utterly different approaches and two great badges this is some head to head. Turbo versus natural aspiration. Japan versus Germany. Straight-six versus V8. If you don't have an inkling of a favourite already you're probably reading the wrong website.

But clear your minds of all preconceptions. And follow us around winter B-roads, and to a slithery Bedford Autodrome. Let's settle this.

Slide into that distinctly Japanese cockpit of

and you're already being pushed into decisions about your allegiances. It's very techy, and steadfastly not European in feel. Some of the black plastic could have been lifted straight from an Avensis. But the RC F is blessed with some satisfyingly cool touches, like the wonderful LFA-inspired multi-function display. Yet cursed with a touchpad interface from the 90s, only reliably operated while driving on bowling greens and billiard tables. Oh, and an indicator stalk that plays tricks on you. 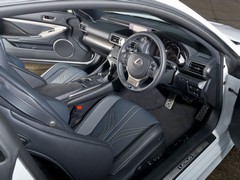 LFA influence evident in the Lexus

But let's stick with the good stuff for now. Push that button, let that big double-VVT-i eight-cylinder rumble into life and the world is already a better place. If anything was to sway an early decision, it would be the muffled roar of the RC F's 5.0-litre V8. It tugs at the heartstrings, though it's certainly not as raw or compelling as classics from the archives. Nor is it as high-revving as the old M3. Still way cooler than the M4 though.

Flick the dial to ECO mode and the squishy throttle pedal and seamlessly smooth shifts remind you of traditional Lexus. In this mode the RC F is almost perfect for cruising through the urban jungle, the fixed rate dampers just unhappy enough to remind you this is a car built for faster speeds. Vertical motions are fast and choppy, only just contained. Steering is still feelsome, brakes are wonderfully accurate, but the sensation of pent-up force is undeniable. 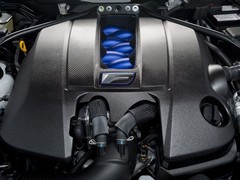 The answer is ... just go faster. As the national speed limit is approached, only then does the RC F deliver on those hinted promises of steering feel and road holding. Every manhole cover that unsettled your cup of coffee at 30mph becomes a satisfying bump under your hands. The steering might be a little muted but in isolation it's still a lively wheel to grip down your favourite A- or B-road. Flowing between corners, surging on a wave of V8 noise, the RC F really begins to carve out some space in your heart.

There are still some niggles though. The eight-speed 'box is quick enough to shift when asking for one gear at a time. But it struggles to stack those changes. And the final drive ratio is just far too long. Why have so many ratios if the first five aren't packed nice and short? Instead, the rev limiter in third gear is enough to have you picking up rubbish, looking after the elderly or even playing "don't drop that soap" for a couple of weeks. 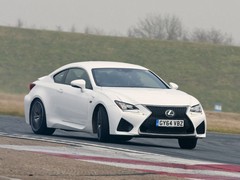 And you'll want to rev it out, that's for sure. Below 4,000rpm the car makes some wonderful noises, but hardly rushes to pick up speed. Over 5,500rpm it pushes you in the back. We're not talking 'VVT-i just kicked in, yo!", but instead an exponential power curve that just climbs steeply into the rev limiter as weight-blunted low-rev sluggishness is forgotten.

Yes, those GS underpinnings and mandatory automatic gearbox are both incongruous and weighty for a car as overtly sporty as this. While rivals shed pounds in 2015, this 2+2 coupe is actually a bit of a porker. Nowhere is it felt more than in cornering transitions and braking into tighter corners. The torque vectoring diff does a sterling job in hiding this most of the time. In pure Top Trumps terms, it's a superior unit to the Active M Differential of the BMWs.

But it's only on track that the trick diff really start to shine.

Bedford South is the chosen venue for Lexus to take on Bavaria's finest. It's a cold day at the Autodrome, a little damp around the edges. A good mix of low- and high-speed turns will give each car the chance to prove itself. Both cars shod with identical Michelin Super Sport tyres.

. From sales predictions to spec sheets. It's an easy car to cheer for, but the M4 just picks it apart. Blow by blow, stitch by stitch, tenth by tenth, the RC F can't resist the onslaught. 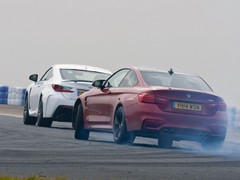 Yes, this happened quite a lot

It starts with the engine. Where the Lexus builds power slowly, reaching an urgent climax just before the rev-limiter, the M4 explodes forward at any given speed or rpm. The fact that it's turbocharged divides opinion. When compared to an E92's V8 at peak rpm, it's definitely a touch softer at providing instant on-demand poke. But these few milliseconds are not laggy, not at all.

The amount of shove is dangerous enough with the driver aids turned off, but couple it to that to a sharp DCT transmission and the M4 is an animal. Every shift, every squeeze of the throttle, the BMW is just looking for trouble. This harder, faster, sharper mentality continues to the handling too. With the aids turned on, both cars are easily as capable as each other. 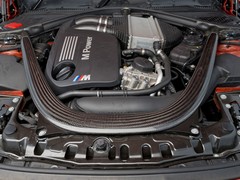 Character, yes, but is it of the likeable type?

Turn it all off and the story changes distinctly. Where the Lexus is a little softer to turn in, the BMW continually stuns with its eagerness to dive to an apex. The electric steering is ridiculously sharp, and actually a little hard to judge at times.

No such worries in the slightly more sluggish Lexus though. You have to push the RC F hard to make it oversteer, and the results can sometimes be a little unpredictable as that super-clever differential finds grip you didn't even think was there. Corner exits should be the domain of the M4, but more often than not it's the RC F that's deploying all of its torque more easily.

Only in the second gear hairpin does the 'disconnect' in the automatic gearbox of the Lexus really become an issue, the lock-up disappearing somewhat randomly to leave you coasting to the apex bereft of engine braking. 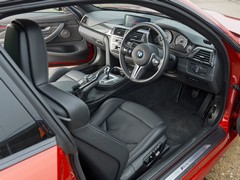 Special enough inside the BMW?

While the BMW will find a car length or two in the middle of the straight again, the surprise is that the RC F doesn't really lose out more than a tenth on the brakes. Considering the M4 is blessed with a set of carbon ceramics adding about 10 per cent of the sticker price, that's seriously impressive. In fact, it takes some real talent (or lack thereof) to worry the brakes on either car. From first press to deep within the turn-in point, the BMW always feels a touch superior. Maybe not a full £6,250 superior though.

Ultimately it's the BMW that sets the faster time against the clock, scoring two laps in the 1min 6sec range. But there are plenty of 8s and 9s too when the back end breaks away. The Lexus? A best of 1min 7.1sec but this was repeatable all day long.

Much has already been said about

on these pages. Unconvincing aurally, and a disappointingly bland at sane speeds. These are fair complaints, but worth re-iterating in this test of the M4 too. 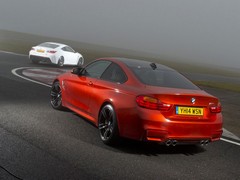 It's not quite as clear cut as it seems

The stark contrast between that twitchy ten-tenths monster that just bested the RC F on track and the slightly vague M4 driven home is amazing. And yes, it's definitely the same car. Nobody swapped it.

The BMW is a brilliant car in so many ways. The cabin is infinitely superior to the RC F in everyday use, with the dials and sat nav knocking the Lexus clean off its perch. Then there are the optional LED lights, which turn night into day and burn wildlife back into the bushes. But that fake engine noise soon begins to grate. And the stereo isn't a patch on the Lexus.

Messing with the economy modes and driving sensibly will honestly net you around 33 per cent more miles for your gallon than equivalent speeds in the bigger RC F too. Low 30s being possible for the M4, but a pipe dream for the RC F.

But mess with the settings too much, soften that suspension, embrace the eco mode too often and the big M car just becomes a well-appointed 335i. It's like going to bed with a Page 3 model and waking up with her mum. Only in fleeting moments of insanity will the BMW force you to remember the vicious speed it can display on track. By comparison, there's a little bit of magic to the RC F that never lets you forget its potential. 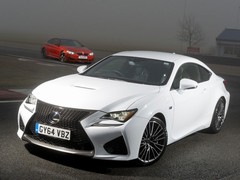 Down but my no means out for the Lexus

We wanted a clear winner. But neither car can be fully commended, not yet.

The F in RC F is supposed to stand for Fuji circuit, remember? And the team behind this car spend weekends racing and spannering at the Nurburgring just as much as the BMW M guys and girls. Yet while their brief allowed such delightful extravagances as the M-humbling, twin-motored, torque vectoring differential, it also left them lumbered with a GS chassis 300kg too heavy and a gearbox some focus group probably said was essential for brand values.

So Lexus did a mighty fine job, but the BMW was never hobbled by such inherited problems, being a whole new car. Though there's still something slightly incoherent and otherworldly about its technology and fakery. The noises, the feedback of the steering wheel and a Jekyll and Hyde character can be the only true objective criticisms of this likewise very good car.

Foregone conclusions, biased or not, are actually very necessary. Pick the one you liked first, and you'll be happy. But the M4 is fastest. But the RC F has a V8.