As Mazda plans its rotary return, what better time to get reacquainted with the original? 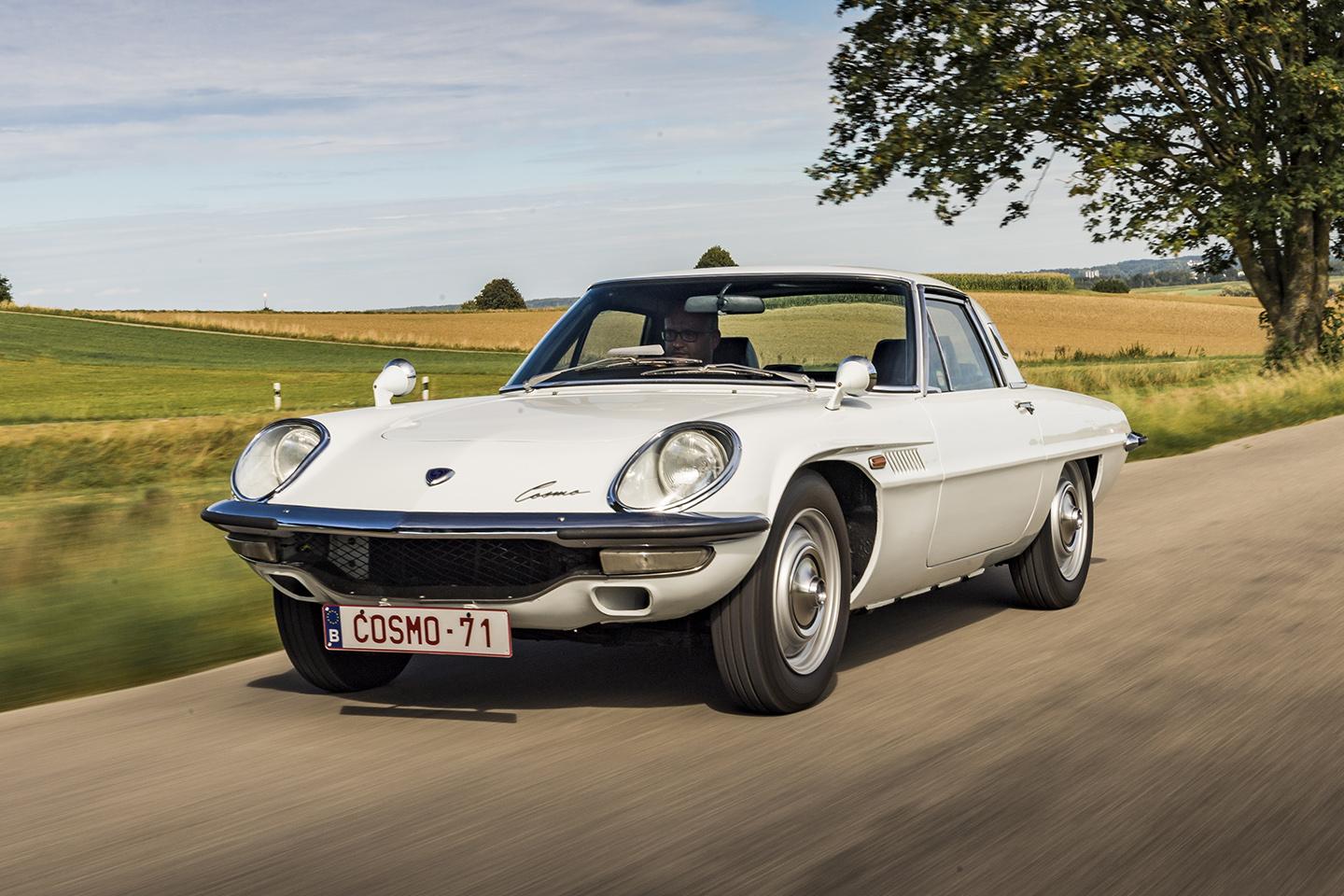 First off, an apology: that subhead is a bit limp. Because even the most ardent enthusiast of Felix Wankel's technology would struggle to find any kind of tangible, meaningful link between a rotary-engined Mazda of the 2020s (the upcoming MX-30 SUV will get a range extender engine using the tech) and the rotary Mazda of the 1960s, because they're so wildly different. The classic car in question is the glorious Cosmo Sport, so named because the world was obsessed with the space race at the time. Heaven knows what a sports car aiming to capture the global cultural zeitgeist now might be called.

Anyway, the point is that, offered a drive in a Cosmo Sport, you do what needs to be done to ensure it happens. A drive in Cosmo Sport required nothing more than an early start, a weirdly busy airport and a lot of hang wringing. In anti bac. But it'll come as little surprise to know the effort was worth it; the car could have been worse and the endeavour far greater, and it still would have been just fine.

The Cosmo drive came on the same day Nissan confirmed the next Zed car won't come to Europe, a death knell for the genre if ever there was one. Which will be a crying shame because it's easy to forget sometimes just how iconic the Japanese back catalogue really is. While the imagination inevitably fires up images of Skylines, Supras and RX-7s, it's crucial to think of where the Japanese were in the late 1960s as well. Alongside cars like the Mazda, there was the 1967 Toyota GT, still one of the prettiest front-engined cars ever made, the original 240Z of 1969 (and the Hakosuka Skylines before it) plus the Honda S800 of a few years earlier. Not long, relatively speaking, after Japanese industry was ravaged by war were its manufacturers producing game-changing vehicles in the arena Europe believed it had a monopoly on.

The Cosmo is a perfect case in point. Mazda was ready to launch a production car in 1940, only for global conflict to intervene. After that it wasn't until the R360 of 1960 - the car paid homage to in this year's 100th anniversary Mazdas - that the brand finally entered the automotive segment. Then the Cosmos arrived just seven years after the 360cc kei car, looking like something from outer space (appropriately enough) and introducing rotary technology to mass production. Seven years after beginning passenger vehicles proper - incredible. It's like securing a Michelin star months after your food tech GCSE.

Mazda green-lit rotary engines in 1961, but the venture was beset by issues from the off; Mazda's own website says that that "the next six years presented nothing but problems and setbacks." Giving up would have been understandable. It was only with seals for the rotor housing made of aluminium infused carbon that the Cosmo could finally be built. Imagine a Mazda without those years of initial frustration, despair and perseverance; it could easily be argued that a Wankel-less (stop laughing) Mazda is even less of a Mazda than one without the MX-5 one. There'd be no RX-7, of course, which would have meant hundreds of thousands of buyers would have been denied a brilliant sports car; there'd have been no 787B Le Mans victory either, or those glorious old touring cars, spitting flames around Silverstone and sounding like the food blenders from hell. Heck, what would Han have driven in Tokyo Drift if Mazda hadn't made rotary engines? That's less of a joke than it seems, too - the RX-7 was a vital, iconic part of the explosion of Japanese car culture for a long time, and its impact wouldn't have been the same with an alternative powertrain. The 13B-REW is as important as the 2JZ and RB26, engines that have become as iconic - maybe more so - as the cars they powered.

Rotary Mazdas have some heritage, then, and it begins right here. Like so many old cars the Cosmo is genuinely tiny, yet it doesn't want for presence. There's something of the speedboat about the Cosmo from the outside, the long rear deck and pert rump giving it a look like nothing else. There's some European influence around, details and touches here and there, but there's also no mistaking the 110 for anything else, or assuming it's some kind of pastiche. For a relatively new manufacturer back then, it was an audacious move, especially in a sector as image conscious as the sports car. There's a certain irony, too, in Mazda doing some of its boldest stuff early on, given the great success of the MX-5 was in reinterpreting the classic, traditional British sports car so unashamedly. Again, like its 240Z and 2000GT adversaries, the Mazda has aged superbly; petite and delicate in a modern context, but with real style and grace as well. Which couldn't be said for everything produced in the late 1960s and early 70s.

Being so diminutive makes the Cosmo a bugger to fold yourself inside. Still, it would be daft to expect anything else, as this is a lot smaller even than an MX-5. The biggest surprise, beyond the beautiful houndstooth seats, is just how contemporary it feels for something first launched during Howard Wilson's first government. You won't mistake it for something new, the Cosmo, but it follows a template lots of cars have followed: the radio is where you'd expect, same for the ventilation, the dials are large and clear, the key goes where you expect it might and everything is clearly labelled. That just isn't the classic car way, the normal routine usually a desperate search for a fly-off handbrake, a start procedure that involves priming this and securing that, then desperately praying to the gods that it'll crank. The Mazda isn't the easiest, though at least it feels like a car.

To modern driving sensibilities, the Cosmo is initially a tad intimidating, which sounds odd for something that looks like an ornate scale model. As the starter turns the throttle is flat to the floor as it slowly but surely churns into life, the 982cc 10A buzzing angrily if eagerly as it warms. Pulling away isn't the simplest, either, requiring more than a few revs and at least one embarrassing stall. Handily, it makes sense soon after just a few stressful minutes.

Like some kind of inverse muscle car (because there's really not much displacement here at all) the Cosmo driving experience is all about the engine. It snarls and it rasps and it smells in the very finest rotary tradition, though there's substance to it as well. As one of the late Series 2 Cosmos, the one in the pictures uses a 130hp derivative of the engine; with less than a tonne to shift that makes the dinky Mazda pleasantly brisk, a feeling undoubtedly heightened by its rabid appetite for revs. Peak power is claimed to be at 7,000rpm, back when an MGB made its maximum (of less than 100hp) at little more than 5,000rpm; today the Cosmo feels good for hundreds more, though deference to its age and condition means never venturing that far. Even then, the smooth, almost sneaky accumulation of speed and power is something to witness, fizzy howl evolving into a much wilder shriek as the needle points right and the tacho paint changes colour. Beyond an incredible, evocative soundtrack it's notable that the Cosmo doesn't struggle in modern traffic, a point perhaps proven (or at least encouraged) by a top speed in excess of 120mph. In today's world Mazda's original rotary feels more than worth all those hard years spent on its development; half a century ago the Cosmo must have felt like a spaceship - pun very much intended.

As for the rest of the package, it's hard not to be totally enamoured by the beautiful little machine. Because familiar classic car traits - some effort to every control, beautiful details like the wheels and the wing mirrors, the intimacy of something so small - combine with that extraordinary powerplant for an experience like no other. It isn't all at sea on the open road, either, the steering and brakes being more than accurate enough. In fact, with a firm and progressive middle pedal and a tight, precise gearshift, there's more than a bit of modern Mazda about the Cosmo.

Given what the rotary went onto achieve and its significance to the marque's heritage, Mazda's very first installation could have been in a humdrum family car and it would still be worthy of Hero status. That it was found under the bonnet of such a pretty coupe - a coupe that helped show the rest of the world 50 years ago what Japan was really capable of - only strengthens the Cosmo's case. The rotary technology is a long way from flawless, of that there can be no doubt, but the character it imparts on any vehicle makes for an unforgettable, unrepeatable and truly absorbing experience. As the automotive world now grapples with how to graft batteries and motors onto a discernible brand identity, Mazda will be hoping that its rotary experience will again pay dividends. The Cosmo, amongst many other things, proves that perseverance can reap remarkable reward.