The E63 won't last long with just a V8; does the plug-in Porsche preview a superior fast wagon? 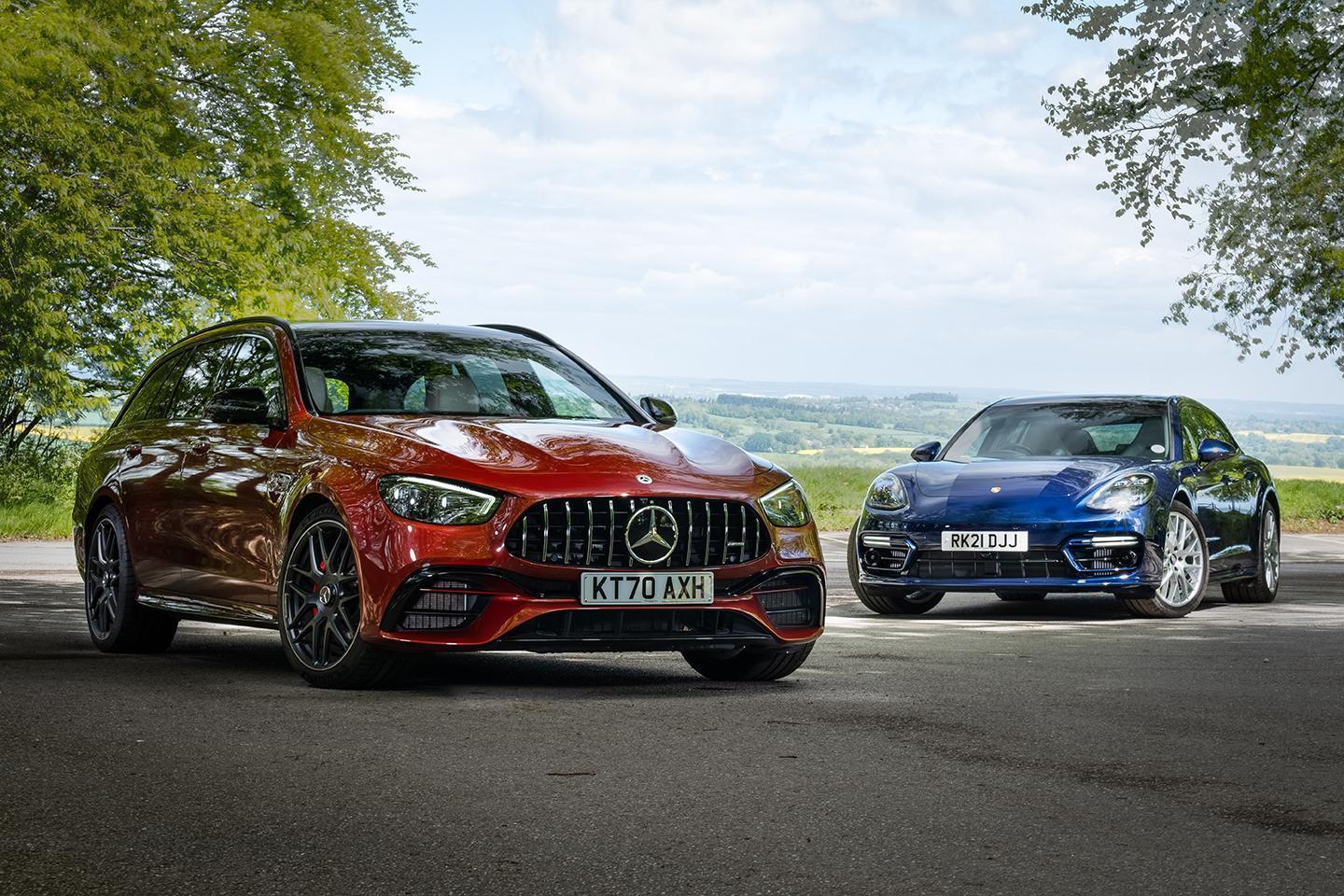 Nothing lasts forever. But in 2007 you'd have been forgiven for thinking that AMG's epic and self-made 6.2-litre V8 would be around for decades - only for it to be replaced in the E63 with a twin-turbo 5.5-litre unit just a few years later. Then in 2016, Mercedes ditched that engine in favour of the current 4.0-litre V8. Now it seems even the hot-V motor might be on the way out - or at least replaced in its current format with a hybridised version. And while that prospect doesn't bode the end of days, it's hard not to get defensive when it comes to AMG V8s.

Of course, it won't be the first to lend electrical assistance to an eight-cylinder engine, which is why the Porsche Panamera is here. Because there's every reason to expect that a new E63 will mirror the powertrain setup of the Sport Turismo Turbo S E-Hybrid. Specifically, that's an V8 bolstered by a battery pack and electric motor for enormous outputs (700hp and 627lb ft, in this case), a chunky kerbweight (2,365kg) and perhaps the best cake-and-eat-it fast car scenario currently available: a stylish V8-powered estate, capable of both 0-62mph in 3.2 seconds and 31 miles of electric range. Which makes it the ideal time to establish if the now old-hat Mercedes can hold a candle to the zeitgeisty Porsche - or smoke it in a way that has us mourning the all too quick passage of time.

Because it's very easy to drive the E63 and conclude that the large estate car can't really get any better. Maybe the car as a whole. Even merely as a do-it-all wagon it impresses; perhaps usability is impacted with macchiato beige AMG Exclusive Nappa leather, but an E-Class estate remains famously enormous, with good stowage, plentiful charging sockets and an intuitive interior as well. There's space here that many a similarly priced (if more modish) SUV could only dream of and build quality that couldn't be anything but modern Benz. The E63 is an easy car to like without going anywhere, actually, having experienced nothing but the Mercedes side of it rather than the AMG. (In fact, the AMG giveaways aren't all that impressive, both carbon trim and wheels arguably a bit too motorsport for something this opulent).

Once underway, any concerns about trim or leather colour or the notion of spending £100,000 on an E-Class evaporate, because it's little short of fabulous. Like the saloon, this updated car has retained the AMG swagger and towering performance, only now with a ride that's noticeably less bullish. At road speed you won't challenge the car, of course, but you will be totally enamoured by it, the E63's combination of speed, poise, immense composure yet easygoing nature very easy to rub along with. It can (and will) mooch along at little more than idle with half the cylinders shut down; all it takes for the switch to AMG hero is an extension of the throttle and a couple of bends. It doesn't need to be configured, adjusted, or prepared - the AMG is just awesome. At everything. All the time.

Yet the Porsche can show it up in a couple of key areas. The first is the obvious one, the one that comes with a very clear demerit as well: the Panamera Sports Turismo looks astoundingly good, low and sleek where the AMG is boxy and upright. Which inevitably means a less commodious interior (especially in this configuration, with the four-seat layout and a boot that houses a charge cable), but it would be easy to imagine those concerns being cast aside and a solution found when presented with a car this striking. We could pack less, we could get a roof box, one of the kids could stay with your parents and so on. Gentian Blue suits the Panamera to a tee (where it maybe looks a bit plain on the sports cars), the luminous green e-Hybrid accents are cool (look at those front brake calipers!) and paying 50 per cent more for it suddenly doesn't seem such a big step. The day of ugly Panameras could hardly seem more distant.

It's similarly lavish and lovely inside, albeit with key concessions to the driver as well. They sit lower in the Porsche than the Mercedes, with a better relationship between pedals, wheel and seat. The steering wheel itself is nicer, too, thinner and not so busy with buttons. If the E63 feels like a Mercedes interior spruced up very well, then the Panamera couldn't be anything but Porsche premium.

Similarly, on the road, the Panamera's Porscheness - for want of a better phrase - is in ample evidence. Against the AMG it steers with a greater sense of connection, offers more satisfying pedal weighting, and shifts gears more decisively, the PDK proving its worth over the MCT almost immediately. Heck, it even sounds better, despite being better insulated, with a little extra V8 rumble via the (optional) sports exhaust. Quite remarkably given the E63's achievements, the Panamera Turbo S feels an even better sorted driver's car... right up until it isn't.

Porsche can only work so many miracles, and there becomes a point when a car that weighs as much as a Range Rover (as opposed to just a Land Rover) begins to feel it. Up until then the Panamera is superb, deftly carving its way along any road, but the moment at which Porsches tend to be extraordinary never quite materialises in the E-Hybrid. There are moments of hesitation that would be entirely acceptable in any other car of this weight (indeed, a car of much less weight) but they feel awkward in a Porsche. Especially when we know how good the Panamera is unencumbered by the additional kilos.

Drive with anything approaching real intent, and the Sport Turismo feels like the conflict of interest that it is. There's Porsche polish to every input, but like a flabby boxer, its finesse is undone by weight. Weight it wasn't specifically designed to accommodate (in stark contrast to the exceptional Taycan). In Hybrid Auto the Panamera flits between electric and petrol power erratically, never sure if it should be saving the planet or reaching 100mph in 7.3 seconds. Pure EV is a sweet party trick (especially with additional range in this facelift) but 136hp has a tough job on its hands; fully wound up in Sport it's monstrously fast, but no quicker than the Mercedes on this experience. Not much more economical, either...

That doesn't diminish the overall technical achievement - even half succeeding at combining the duties of EV commuter, effortless GT and Porsche sports car (to an extent) under one swoopy roof hard is deeply commendable. But when the purely combustion Turbo S Sport Turismo is just as fast, the 4S E-Hybrid fitted with an identical electric motor and the GTS gets the same V8 - albeit with less power - for more than £30,000 less, you do wonder who the top spec car is actually for. And that's before considering the Taycan Cross Turismo, which anyone spending £140k+ on an electrified Porsche estate in 2021 would absolutely have to do. Compared to many if not most of the alternatives, it's difficult to see one where the Turbo S E-Hybrid comes out on top.

Certainly it's hard to claim that it overshadows the AMG. In finessing a recipe that's served Mercedes well for so long - huge V8, even bigger boot, an automatic gearbox and leather-lined luxury - the E63 has become the very best it can be. Perhaps in previous generations the flagship E-Class could be criticised for the waywardness of rear-wheel drive, a gearbox not quite good enough or a stiff ride - but no longer. It is the consummate uberwagon experience, where huge levels of performance, practicality, desirability and driver reward meld near perfectly, proof that the (relatively) old ways can still deliver a mighty experience - and fit the desired role brilliantly well. Albeit while using, by the official figures at least, four times as much fuel as the Porsche...

For some, that point alone justifies the Turbo S E-Hybrid's lofty position, and the validity of the plug-in concept. For many of its buyers, the model will feel like a Porsche all the time, with the ability to do zero emission school runs and commutes during the week while charging at home - then travel anywhere that's required at the weekend. With 700hp. Which is appealing. It is the kind of duality that AMG will likely hope to integrate into the next generation of E63 - and if batteries continue to get lighter while becoming more energy dense, then the potential for making the best better is at least feasible. But for now, the V8-powered estate car still works best when its powered solely by a V8. For how many more years, who can say?