You'll be able to read how the

drives very shortly. To get the number crunching and comparisons out of the way first though here's a bit of a spec head to head against some key rivals. One that throws up some pretty keen benchmarking by Mercedes.

Before we get to that a quick update on the updated GT range, which seems to have got a bit confusing of late. The basic progression is GT, GT S, GT C and GT R. GT now has 476hp and 464lb ft and is available as a Coupe (£98,745) or Roadster (£110,145) while the S gets 522hp and 494lb ft and is (currently) only offered as a Coupe for £112,045. Things get a bit more serious with the GT C, currently only available as a Roadster and getting a retuned version of the 4.0-litre twin-turbo V8 with 557hp and 501lb ft. It also gets four-wheel steering from the GT R and a 57mm increase in body width at the back for a much more aggressive stance. A GT C Edition 50 Coupe will be joining the line-up in due course, the 585hp GT R coupe sitting at the top at £143,245. All GTs now have that car's Panamericana grille and a version of its Active Air Control System - basically electrically operated slats in the bumper that close for reduced drag and only open when the engine and brakes require the additional airflow.

Like for like the roadsters weigh 55-65kg more than equivalent coupes, the final figure depending on whether it's got the four-wheel steering. Heaviest is the GT C Roadster, which weighs 1,735kg with driver. Not exactly light but, as we'll see, a worthwhile chunk less than some of its rivals - not least the Audi R8 Spyder, which weighs a surprising 1,795kg by the same standard. 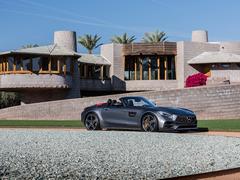 The joy of specs

Standard across all GT Roadsters is the option of three colours - black, red or tan - for your folding roof, the soft-top retractable in just 11 seconds at speeds of up to 30mph. Heated seats and the Airscarf system are standard on both models to encourage you to make the most of this ability, whatever the season. The GT C also gets more 'sportlich' AMG seats with reduced padding and bigger side bolsters. In a generous move Mercedes UK has made sure the active AMG Performance Exhaust with its two electronically controlled flaps is standard on all models - in other markets it's a cost option on the base GT. Standard suspension on the GT is the passive set-up, upgradeable to three-mode Ride Control adaptive dampers for £1,495. These are standard on the GT C, the £1,795 Dynamic Plus pack offering the same with stiffer spring and damper rates plus dynamic engine mounts for the engine and gearbox. The GT gets a three-mode AMG Drive Unit control system and mechanical limited-slip diff, the GT C meanwhile adding a Race mode and fitted with a fully active electronically controlled locking differential, as seen on

The performance upgrades for the GT C are significant and detailed in the review coming shortly. While we're talking equipment though your extra money also gets you 19-/20-inch wheels, Burmester sound system, Parktronic sensors, red brake calipers, Keyless-Go and a microfibre trimmed 'performance' steering wheel. Much of this is available in a £4,195 Premium Equipment package on the GT. One reason you might want to add the Burmester system is the 'Externed Coupled Subwoofer', which effectively turns the whole bodyshell into a bass bin by connecting the speaker to a special aperture in the right rear wheelarch. Handy, given aforementioned standard-fit Performance Exhaust. 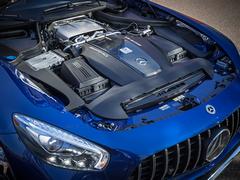 So much for the spec geekery; what else might tempt you for the money? The obvious rival for the GT Roadster is the

. It's five grand more but has nearly 100hp extra, all-wheel drive and all the aggression of the GT C. On paper it looks like a bit of a bargain then, the V8 rasp from its Inconel exhausts the only real rival to the traditional AMG soundtrack too. It's suitably exciting to drive too, the all-wheel drive system tactfully plastering over the rear-driven F-Type V8's traction issues, entertaining as they are. The Jaguar is heavier than the GT Roadster though, has a slightly wobbly structure in Convertible form and lacks the more exotic transaxle layout of the AMG, meaning its engine and heavy eight-speed gearbox are all up front. Bang for buck counts in its favour though. And the spoiler is a delete option, thankfully.

This is but the warm-up for the GT C though, which has been more aggressively targetted at key German rivals. The Audi R8 Spyder is a rather different car, being mid-engined and naturally aspirated. But the appeal of that 5.2-litre V10 and fact it undercuts the GT C by a whole £10K go in its favour. The Audi's 540hp and - more importantly - 398lb ft look a little underwhelming on paper against the AMG's turbocharged clout, especially given its surprising kerbweight. But, as we found, in a car like this the experience matters more than the numbers and the Spyder version of the R8 is arguably the most engaging in the range. If you can fit in it - those much over six feet may struggle given how limited the seat travel is.

Audi's 'everyday supercar' thing plays well for the R8 but at the other end of the scale the GT C also faces more exotic rivals, not least the Ferrari California T. A front/mid-mounted turbocharged V8, transaxle seven-speed gearbox and 560hp makes the Ferrari a close on-paper match to the AMG, the California T's £155K pricetag a stretch from the £140K of the GT C but a gap that could easily be closed by speccing the Mercedes up with ceramic brakes, carbon trimmings and a few other bits and bobs. Then again Ferrari options aren't exactly cheap either and it won't take many box ticks to push the Italian car into a more serious price bracket. Beauty is in the eye of and all that but the California T perhaps isn't the most beautiful Ferrari ever made. But it is a Ferrari and that will count for a lot, the updated Handling Speciale package giving it sharpened handling to live up to the brand values. 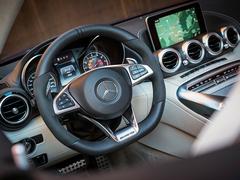 So to the 911 Turbo Cabriolet, arguably the car AMG has most squarely in its sights. And against which it offers an aggressively pitched alternative. Look at the numbers - for the price of the 540hp Turbo you get pretty much equivalent performance, technology and pose value to the £155,000 Turbo S. OK, by the time you add the Dynamic Plus pack for the equivalent active engine mounts and the ceramic brakes the AMG will be closer to Turbo S money. And the flagship Porsche throws a hell of a lot of technology at the road, including four-wheel drive, active anti-roll, four-wheel steering and fancy torque vectoring. Those rear seats - token or not - are often cited as a key factor in the 911's favour too.

But at a purely superficial level the Turbo Cabriolet has never been, shall we say, the most beautiful of 911s. Brutally fast and effective, yes. But the combination of extra vents, wings and body width don't add up to the most graceful of shapes. Porsche has improved the sound from its Turbo engine and there is no denying the extraordinary punch from its overboosted power delivery. But the AMG GT C looks a lot more exotic, has attitude aplenty from its widebody stance and plays well to those traditional front-engined roadster proportions. And we know AMG can make a turbo V8 sound more than convincing. By the numbers though the Porsche remains untouchable.

Whether that advantage is one worth having in a car aimed as much at the heart as the head is something we'll address shortly. There's also the interesting comparison to be made with its own in-house rival, the 585hp, £116K SL63 AMG. We'll save that one for the road though...