24 hours to drive an officially promoted 500-mile loop of the north coast of Scotland? Go on then...

is - clue in the name - a 500-mile loop around the north coast of Scotland. And proof that the simplest ideas are often the best, this one contrived in a meeting of the North Highland Initiative whose job it is to promote the best the region has to offer. How better than by simply encouraging people to drive around it? 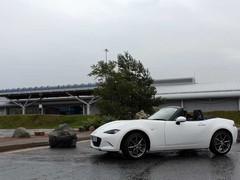 A real man would have driven up...

Now, in the brainstorming session described to us they probably wanted visitors to take their time. Soak in the scenery. Indulge in the food and drink from the carefully selected shops, restaurants and cafes along the route. While away some time in hotels and guesthouses identified as breaking the journey into manageable chunks. Not attempt to get round it in 24 hours, having 'liberated'

At John O'Groats I tap my destination of Inverness Airport into the nav. It puts my arrival time as half an hour after my plane home is due to depart. Ah.

But let's back-track a little. 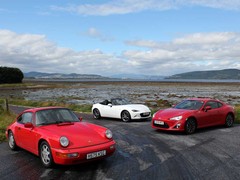 I'll work on the basis that if you're reading this you're not a local and driving in Scotland is either a pleasurable novelty you're well aware of or something on the 'to-do' list. Here's a hint - bump it up to the top. Because if you haven't taken your car as far north on this island as you can without getting its wheels wet you really are missing a trick.

For Sassenach readers just try imagining your absolute favourite section of English road. It's probably just a few miles long, right? And no matter how early you get up the chances of getting a clear run at it are between slim and none. Imagine how it would feel if you knew there wasn't going to be anyone on it. And it went on for several hundred miles amid awe-inspiring scenery as breathtaking as you'll get anywhere on the planet. 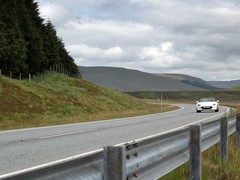 Not long out of Inverness and you're into this...

You could do the NC500 in an Ariel Atom with your bivvy bag lashed to the chassis tubes, dine on the midges between your teeth and lay your roll mat down on the road side when it all got too much. Or you could waft around in a Bentley Continental GT, stuffing your face with fine food and drink at regular intervals and staying at the various boutique hotels along the way. Both would be equally appealing in their own way.

My choice is the middle way in a new MX-5 purloined from Mazda's UK launch event based out of Inverness with our Matt joining in his GT86 (more on this in a standalone story) and mate Ben in his 964 Carrera 2. Both are waiting for me at Inverness airport as I land, grab myself a white 2.0-litre Sport Nav MX-5 and we hit the road. First stop is beside the Beauly Firth for photos, the Kessock Bridge that carries the A9 over the water making a fine backdrop while the adjacent sewerage works mean we're not inclined to linger to soak in the atmosphere. 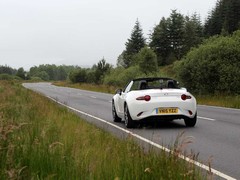 Road less travelled ... about to be travelled

The first few miles out of Inverness are, in the scheme of things, not especially inspiring. Standard A-roads with standard A-road traffic, albeit in already lush scenery. The official NC500 route takes the southern shore of the Beauly Firth but we opt for the A9 and northern side on the basis we need to get some miles under our belts. And by the time we get onto the A835 that runs north-west towards Ullapool (see map below or

here) things are taking a sudden turn for the desolate.

The quick way to Ullapool is to stay on the A835 but we're here for the scenic route and actually head south-east along the A382 and A890. Hugging the sides of lochs large and small with ominous grey clouds brooding over the hills either side the roads flow with the terrain. Sightlines are generous, traffic light and when bumbling camper vans or caravans are encountered the MX-5's 160hp is plenty to be dealing with them. I know, and there I was in the review saying it felt a little under endowed for overtaking... Barely 30 miles out of Inverness and already the drive is delivering on both the epic scenery and amazing roads front. And with the roof down you really get to soak it all in with the added bonus of comfortably outrunning the midges. 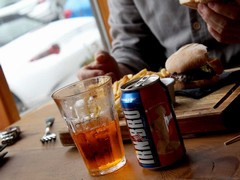 It's not just cars that need fuel...

Halfway along Glen Carron we get our first bit of singletrack road. Now, if you've not driven in Scotland much this can come as a bit of a surprise. Typically bumpy and patchily surfaced you'll probably regret bringing that supercar but other than that they're less of a limitation than you might think. Passing places are plentiful, sightlines again are generous making it easy to spot traffic ahead and there are even signs reminding people to pull in and let faster traffic through. How very civilised.

Saying that we decide to give the iconic Applecross loop a miss in the name of making up a bit of time. It's famously stunning but we've got our eye on another similar coastal loop further north so stop for lunch at Torridon before rejoining a 'proper' road towards the invigoratingly bleak Gairloch. On the climb out you get the first sense of the coastal aspect of the route, the fractured, rugged coastline of western Scotland simply breathtaking in its scale. 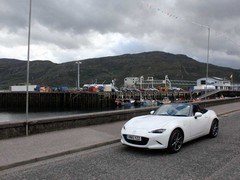 Ullapool is a bustling metropolis in these parts

in Ullapool but thankfully they're still in despite it being after closing. Phew. At the filling station we meet two PHers - Jonathan and Simon - in a rented Caterham looking a bit wide-eyed and wired. They have a table booked for a couple of hours further up the road and join us for the next stint which, even by the standards of what we've just driven, is incredible.

It's early evening by the time we part ways to take the Clachtoll loop we've promised ourselves instead of Applecross and the first section is absolutely deserted, fast, flowing and utterly inspirational. Then things get a bit tight and singletrack and though the beaches are stunning and the sense of hugging the coast is thrilling our pace slows to a crawl and the clock is ticking. Here the scattered whitewashed houses and farms have a real Scandinavian feel, black rock of the cliffs contrasting vividly with the white sand of the beaches. It genuinely feels like being in another country, a large 'Yes!' painted on the side of a house a reminder that some would like it to be. 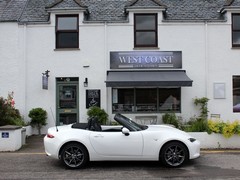 The road drags a bit from a driving perspective though, now both tiring and slow thanks to the lack of visibility and constant concentration required. If you're doing the trip for the scenery and a chance to dip your toes in the sea it's great. If you're there for the driving probably best keeping to the big roads.

When we emerge onto the A894 there are raised arms and toots of the horn in celebration, the reward being the stunning sweep over the Kylesku Bridge and endless twists and turns over the rolling coastal topography towards Scourie. The final push towards our overnight at Durness is along more singletrack, this time open and well sighted and far less mentally exhausting than the Clachtoll loop. Two hazards present themselves, both white, both with a proprietary claim on the centre of the road and with similar capacity for reason. Namely white vans. And sheep. Neither are making any allowances for idiot tourists in sports cars... Further on I latch onto a local in an Isuzu pick-up, clipping along at a steady 50-60mph and definitely making progress. I think I see brake lights once in about 10 miles and am quite happy to dip into his local knowledge. 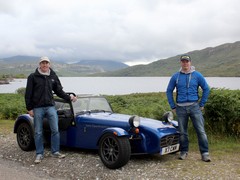 PHers in a rental Caterham - good way to do it!

End of the road

Durness seems an appropriate place to stop, given we've run out of land. The quietly swanky

looks appealing but we decide to save the cash and stay in their adjacent 'Lazy Crofter' bunkhouse instead, investing the savings in the hotel's very posh and utterly delicious breakfast the next morning. Full appreciation of which puts us seriously behind schedule for day two.

The coastal views on this section are incredible, the shoreline dotted with coves, cliffs and outcrops of rock into the sea. This'll be the 'north coast' bit then, though by Scrabster things are getting a little more rugged and bleak. By Dounreay nuclear power station we pass a warning sign for an adjacent police firing range - no need for speed cameras round here then... 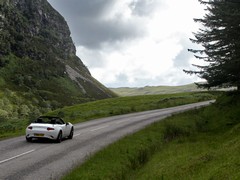 John O'Groats is, in all honesty, a slight let-down of weathered guest houses and the odd little tea shop seemingly stuck in the 1950s. Not that I have time to linger. From Wick it's A9 all the way back to Inverness, the road hugging the coast most of the way and revealing a more open and verdant landscape than the rugged western side. There are castles jutting out from headlands and on the horizon the hulks of the oil rigs looming out of the water. The road dips and dives its way through coves but by this point it's getting busier and with the clock ticking things are getting a little squeaky cheeked.

For those with more time to spend there are attractions along this stretch, be they historic like Dunrobin Castle or culinary like the Storehouse of Foulis. 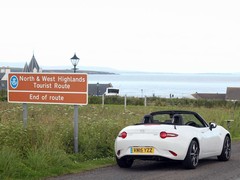 The final stretch of A9 into Inverness is enlivened by the near mile-long bridge over the Cromarty Firth but by now the holiday traffic and trucks combine to bring me back to reality of what 'normal' driving is like and my ETA is looking worryingly close to the departure of my flight back to Manchester.

A bit wired and windswept I chuck the keys to the Mazda back to the car prep team, leg it to the terminal and just about make it through check-in with a couple of minutes to spare. Phew.

So it can be done in 24 hours. And as a drive, an experience and an eye-opening demonstration of just how little of this island we appreciate from south of the border an experience to savour. But if you have the time to indulge a little more on what the route has to offer by all means take it. Definitely one for the automotive bucket list...

For the route, itineraries and information about things to see and do along the way check out the NorthCoast500 site. Follow the route here. With thanks to Claire and Tom at North Highland Initiative for their help.