While much of the British engineering firm's iconic fame is owed to the past, 2018 finds Cosworth in rude health 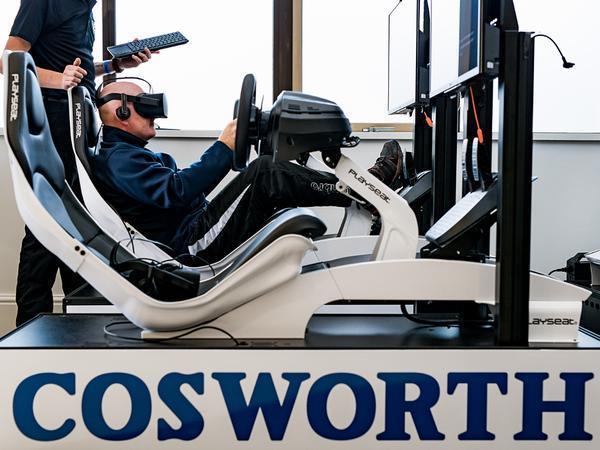 Cosworth. A name lodged into the brains of enthusiasts like us for producing the groundbreaking DFV V8 of the Lotus 49, creating the Group A homologated engine of the Ford Sierra Cosworth or developing the most powerful road going V12 in the world for the Aston Martin Valkyrie. Or, more than likely, all of the above and more. Yet, unless you're a stakeholder or industry insider, it's unlikely that your perception of the company is accurate anymore. To most of us, Cosworth is synonymous with motorsport, yet in reality, in 2018, motor racing forms only a tiny portion of what this great British company is about.

In the past five years, Cosworth has transitioned from primarily a high performance engine builder into a diverse, multifaceted engineering operation. Attempting to future proof itself against changes in the automotive world has inevitably meant that it has fingers in the world of autonomous cars, but it is also still doing some frankly mind blowing things with road car engines; something its Managing Director Powertrain, Bruce Wood believes is pivotal to the company's longevity. He thinks combustion technology is yet to pass through several more major breakthroughs. More on those shortly.

So Cosworth in 2018, its 60th year - what does it look like? It's still headquartered in Northamptonshire, a location its founders, Mike Costin and Keith Duckworth, chose to move to from London due to its location smack bang between the capital and Birmingham, where most of the brand's earliest customers and suppliers came from. But now this original site (the first acre of which was bought for £6,000 back in the early '60s) is joined by one in Cambridge, which focuses on electronics, and, as of this summer, a North American production site in Michigan that makes motors for US clients including General Motors and Cadillac. Cossie is very much a global brand now.

But it's still Cosworth. That's very clear as PH is shown around its Northants home, allowed through doors Wood says have not been opened to outsiders for over 15 years and shown the sort of futuristic tech Cosworth has been growing its portfolio on without making too much noise about it. In the first section we visit, there are some engineers who've been with the company since its pure motorsport days and others who have recently graduated from university and landed themselves a dream job from the get go. There are cutting edge components, including 12 beautifully machined pistons for the Valkyrie's 6.5-litre V12, laid out on a bench next to a TAG-Porsche turbo F1 engine that was used by McLaren in the mid-80s. We're told this motor is being integrated into a "modern" 911 road car, can you believe? The crossover of past and future is immediately obvious.

"We need diversity to survive," is how Wood - a proper car enthusiast and, naturally, a reader of PH - explains the increasing mixture of projects. "We realised years ago that focusing entirely on motorsport wasn't cost effective for us to grow. Focusing on one thing is risky business nowadays; having a wide portfolio means if demand for one thing goes, we've still got a business left." That explains why Cosworth has been so enthusiastic to take its motorsport data gathering technology, for example, and use it to create Alivedrive, a system that OEMs can buy to integrate into a car's infotainment architecture. It displays live journey data on the screen and can also capture video. If you saw such a system in a car would you have ever thought it'd come from Cosworth's Cambridge electronics site? Us neither. The same goes for the Lidar it is currently co-developing for autonomous cars, which it claims will be smaller and lighter than its rivals, as well as brought to market more quickly.

"One thing we can take from motorsport and apply across all our work is methodology," explains Wood. "While our involvement in motor racing doesn't have any relevance to the autonomous side of things, the pace of development, the hard-set deadline making, is something we find natural and understand. This gives us an advantage in bringing things to market."

There's also lots of impressive work being done in the world of wireless technology to replace wire looms in cars. Cosworth first developed it to monitor battery cells in an electric or hybrid vehicle, but Wood says that there's no reason it couldn't be made to work for more components. Cosworth reckons it saves around 10kg per car from the ditching of wiring within battery cells. Imagine what sort of weight saving it could achieve in a sports car if all the components were wirelessly connected...

From a PH perspective, however, the most exciting area of investment at this fast-growing company comes in its combustion engine technology. The Valkyrie serves as a halo car for the work Cosworth is doing, what with it being - as the engine test engineers say - "around 200 to 300hp more powerful than the current most powerful road V12", which we know is the 800hp 6.5-litre heart of the Ferrari 812 Superfast. Such a figure would fit with the one mentioned in a tweet that was put out (and subsequently deleted) by Cosworth recently, claiming the naturally aspirated Valkyrie would have "1130bhp" (1146hp). But Cosworth is most proud not just of that phenomenal claim for maximum output, but the fact the car conforms to the very latest emissions limits as well.

That's some achievement - even for a firm with pedigree like this one - without the use of turbocharging. Cosworth had to turn the way it develops an engine on its head to make it possible. Wood reveals that engineers developed the combustion process first, digitally simulating 20 different processes before choosing the optimum one and designing the engine case around it. "This is the opposite way of what is traditionally done in engine design," he says. The motor sounds phenomenal, by the way, with a bench demonstration of the V12 confirming to PH that a Valkyrie will have the vocals of a slightly muted mid-90s F1 car. It's shivers down the spine sort of stuff.

Lesser known is Cosworth's role in producing the engine blocks for the turbocharged V6 of the Honda NSX. These aluminium cases feature cutting-edge and tracing paper-thin plasma ion coatings in their cylinders, instead of a thicker and heavier layer of steel, which is the common option for aluminium blocks. This saves weight, is tougher and also lowers friction because the coating is slightly porous, so oil particles can embed into it. That means higher efficiency running, which is very useful in a hybrid supercar like the NSX, but also entirely relevant for pretty much every combustion engine car out there. Cosworth is already an expert in this brand spanking new tech, so expect to see its name attached to many more examples soon.

"I think there's also still much progress to be made in variable compression," adds Wood, "and engine cooling to enhance thermal efficiency." He explains that Cosworth recently developed a system with three different cooling circuits in it to make the most thermally-efficient 2.0-litre engine in the world (it's rated at 38%) for a Thai client that's producing 250,000 units a year. Who said the combustion engine was done?

Cosworth doesn't have its fingers in all pies, of course. One largely untapped area is the aftermarket business, Wood notes. Cosworth's most recent venture into this world was with a supercharger kit for the Toyota GT86, the one offering up to 280hp that PH drove and loved, but Wood concedes that its success was limited by business. "Customers expect the parts to be immediately available, but that requires us to put money forward to build up a stockpile of components," he says. "Then we also need the customer support, so it's risky for us and making money is hard. But the customer aftermarket is something we're certainly thinking about. We've got a lot to offer there."

A safer - financially speaking - customer-facing area that Cosworth is attempting to grow into relates to bespoke, classic car builds. It's already worked with Singer to produce ultra-potent air-cooled flat sixes, but Wood recognises there's an opportunity for more Cosworth involvement in individual projects, with the brand's pedigree a major component in generating demand. "This sort of project plays perfectly to our skill set," he says. It's got the potential to be a considerable cash generator as well. Just ask Aston Martin, which you might remember is charging £2.75 million for those DB5 Goldfinger Recreations.

There's a lot going on and still plenty of potential for future growth at Cosworth, then. And we didn't even mention the two-stroke engines for US Navy drones it's producing that can run so efficiently they stay airborne for 36 hours. Or Cosworth's continued interest in providing a manufacturer with support for engine development in F1. Or its growing Formula E tech involvement. You get the point.

This is a company with an unrivalled history but, in its 60th year, one that is very clearly still going to many, many more places. The investment in the US certainly represents its biggest opportunity for growing its client base, which, in business terms, is very exciting. For us, the enthusiasts, Cosworth looks set to remain a household name. Admittedly, some of that will come from the hardware fitted to autonomous cars of the future, but thankfully, it'll also be because of the parts and technology featured in our petrol-drinking sports and supercars. That's good news for both the business and us. And should ensure the survival of one of Britain's best-loved motoring brands long into the future.