This year was the Exiges.com 10th Easter track day at Anglesey - PH went along to join the party 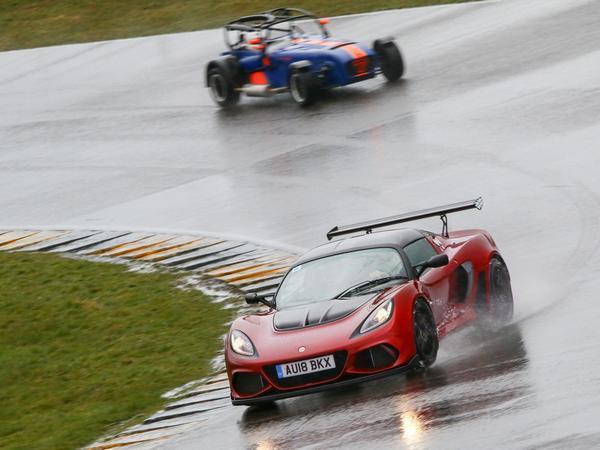 Easter in an Exige - yes, we've done the 'Eggsige' jokes already - is a feature that we've been meaning to do for a while now. But with various issues around car availability, people availability and, to be frank, Easter only happening once a year, it has taken until 2018 for it to happen. Rest assured, though, it was most certainly worth the wait.

And not just for the obvious reasons, either, because we all know that driving the fastest Exige ever made across Wales to arguably Britain's best circuit beats spending the weekend eating chocolate with your Nan. As much as anything else, the point of the weekend was to experience a proper owner's club meet, to see why people want to be involved and understand the dedication that sees dozens come to Anglesey in their Lotuses every Easter. (The Exiges.com Easter track day has been running for 17 years, with this the 10th one at Anglesey.)

See, while PistonHeads has its foundations in quite specific brands, it has evolved into a very broad church for every type of enthusiast. We love that, and want to encourage it - but because PH is not a brand-specific owners forum (notwithstanding the many areas that do deal in specifics) we'll cheerfully concede that a proper owners club has its obvious advantages. And without wanting to sound like Louis Theroux on his way to meet a cult, your correspondent was looking forward to the experience; not least because a decent car has never sat on the driveway long enough to permit joining up anywhere previously.

Ben Phillips was my guide for the weekend, a long-term Exige owner and prominent figure in this owners club. Sadly with his Exige S1 still being worked on, Ben had his Seven R300 race car taken to Anglesey and arrived in his E63. You know, the 585hp rear-wheel drive one. You'd like Ben. Having spent all of 10 minutes with him, you get an insight into what makes owners clubs like Exiges.com so appealing: everybody knows Ben, Ben knows everybody, and they all have stories to share and conversations to catch up on.

Ben was at Anglesey with his mates, all in Sevens, all of whom have something to say about their adventures in Lotuses and, er, cars that were once called Lotuses. And that's the key: Lotus ownership, and membership of this club, has brought them together and continues to provide them with fantastic experiences on road and track. Which rather feels like the point.

You can certainly see it everywhere, fathers attending with sons, husbands attending with wives and so on. A 'family atmosphere' is about as hackneyed as cliches get, but there's a real sense of belonging here, and of helping each other out, yet they're incredibly welcoming too: it's an inclusive, friendly bunch of people, which again just makes you want to be part of it even more. Always helps if you've got a brand new and very fast version of the Lotus everybody else has, too...

Which brings us nicely to the cars, yet another reason why you should consider getting into an owners club, whatever you drive. Loitering in the windswept garages of Anglesey were some of the finest Exiges you've ever seen, from seemingly immaculate Toyota-engined S2s to bonkers engine-swapped S1s to another version of the S3 that even Lotus has probably forgotten about. That's in addition to a whole host of other Lotuses, including an Evora GTE - yes, there really is at least one in the UK!

Unsurprisingly the 430 proves popular, and being among its own kind makes it far easier to appreciate the changes from lesser S3 Exiges. Next to a 380 Sport you can really notice the higher wing, those gaping front intakes and all the extra carbon - it creates a much more assertive looking car, even if the spec sheet may not have entirely convinced you. Next to an original 350hp S3, it almost feels like the difference between 911 Carrera and GT3 RS - there's just so much more attitude.

That bears out on track, too, even if attitude is the last thing anybody is after when the Irish Sea is throwing a strop on the tarmac. Anglesey was treacherously slippery into the afternoon of Easter Monday, which wasn't ideal for anybody in attendance. To its credit the 430 Cup retained admirable poise and composure, the traction from slow corners being quite remarkable. And on the limited occasions that there were to stretch its legs, the Exige was hugely fast. Not as fast as one of those S1s with an Audi turbo engine, as it turns out, but apparently that's making more than 450hp...

While the weather inevitably made a track day involving Lotuses trickier than it really should have, the infectious and undiluted enthusiasm of the Exiges.com guys and girls proved impossible to ignore. They clearly love the brand and love their cars - understandable when you see the vehicles in question - but they also love sharing their cars with people who have the same passion as they do. Whatever you drive, indeed whatever your passion is, don't we all love doing that? That's why there were so many people at Anglesey, why projects will continue to be worked on, why Lotuses will be kept and, even if the Lotuses go, why these people will continue to be part of Exiges.com. Because it's the people that have become more important, and the friendships made, rather than simply owning the car.

To conclude, therefore, some simple advice in order of importance from lowest to highest: get on a track day if you haven't already (BookaTrack run excellent days, even when it's lashing down), get to Anglesey if you haven't been (because it's superb), drive a Lotus (and realise how synthetic a lot of 'sports cars' really are) and, most importantly, join the owners club for your car. Not only will you learn a lot, I guarantee you'll make some new friends and have great experiences, too. Even in the rain. Of course you'll most likely be aware of this already, but just in case you aren't it can't come recommended highly enough. And maybe, just maybe, the weather might pick up soon and proper car meets with owners clubs and everyone else can actually happen outside again...

Huge thanks to Exiges.com and BookaTrack for having us along - see the full list of BaT track days here. Off track Exige 430 pics from Will Aron.