Leave your humility at the door please! Yes, when it comes to excess all areas SUVs we're going maximum attack, pitching 'our'

against the fastest, most extravagant Cayenne you can (currently) buy, the

. Brace yourselves, we're begging indulgence for yet another attempt at the Ultimate England Vs Germany grouptest...

For a good portion of PHers this is a pointless manhood measurement contest between two pumped up, attention-seeking braggarts. More generously you might consider both of these cars guilty pleasures; extravagant family motors for the upwardly mobile in search of the ticks-all-boxes solution to please all members of the household. If you're going to do it you may as well do it properly and all that.

Top of the Range Rover Sport tree or not a quick glance of the spec sheets will reveal the twin-turbo Cayenne enters this contest boasting the more impressive numbers. There's that 570hp to the SVR's 550hp, a thumping 590lb ft against 501lb ft for the Range Rover's supercharged V8, a 100kg weight saving and a massive £23,305 premium over the Sport's £95,150. 0-62 and top speed also weigh in the Porsche's favour.

This is still an away match for the Cayenne though. Porsche has grown fat off the success of its genre defining sportlich SUV. But flip this contest on its head and imagine a comparison between 911 GT3 and an imaginary Range Rover sports car and you get a sense of the challenge the SVR lays down. Character goes a long way and all that.

You'll be familiar with this car from its appearances on the PH Fleet and the slow burn charm offensive. You may not like the genre but, hell, the SVR's charisma is sufficient to have you making exceptions.

The Sport has the instant advantage of not trying to be something it's not. Easier to tighten up the handling of an SUV and make it feel a bit sporty than attempt to contrive the feeling of driving a 911 Turbo in a top-heavy, four-seat 4x4 after all.

In styling and dynamics the Range Rover has nothing to hide. It's a burly 4x4, square-cut and drawing on a formidable heritage. Handsome is eye of the beholder but proportionally the Sport manages to be both faithful to its traditions without looking at all retro. It's unapologetic but undeniably fit for purpose. Same can be said for the interior, the only let-down being an infotainment interface seemingly a generation behind the rest of the car.

On the road it's as big a laugh as that outrageous exhaust note suggests. Chassis and powertrain wise both of these cars settle on variations of the same solution to combining huge power with seemingly unfavourable weight distribution. Both have variable height air suspension, active anti-roll systems and clever active diff based distribution of power. In the SVR's case it feels more like a souped-up off-roader, albeit carried off with some style. 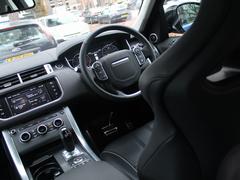 Electrically assisted, and with a mechanical variable rack, the steering, nonetheless, remains key. The weighting is spot-on, giving you a sense of something to push against and just a hint of what's going on beneath. On all-seasons tyres the grip levels are such you can actually play with its balance on the throttle to an extent too, the long travel suspension meaning you can throw the weight around to where it can help, not hinder.

The linearity of the power delivery can fool you into thinking it's not quite as fast as you might hope. It is though, the view over the hedges from the raised seating position and fearsome punch making it quite the overtaking weapon when confronted with the dawdling masses.

Look for a used Range Rover Sport SVR in the classifieds! 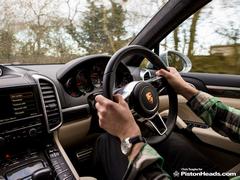 From the off the Cayenne seems desperate to convince you you're in anything but an SUV. The driving position is low-slung, the instrument binnacles enveloping, the shoulder-line high and the wheel much smaller than the Range Rover's yacht-like helm. Which makes the oddly light and insincere weighting of the Power Steering Plus - an option on most other Cayennes - all the more disconcerting. It's not an active variable ratio system like that used by Audi and others but its impact on your confidence is as telling.

This isn't helped by the appalling visibility. The Range Rover, shall we say, enhances your confidence by elevating you over the masses and letting you savour the view. The Cayenne is more like driving an armoured vehicle and peering through slit-like windows, increasing the sense of isolation and disconnection. And in a car this potent that's a little worrying.

No complaints about the way it goes though, the S offering a decent step up from the 520hp and 553lb ft of the regular Cayenne Turbo. It also gets kit like the roll-cancelling PDCC and PCCM ceramic brakes as standard too, somewhat offsetting that burly entry price and premium over the SVR. 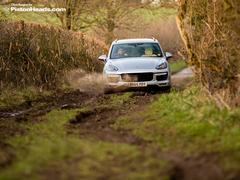 The turbos mean an initial softness to the throttle response, swiftly replaced by a thrilling rush of boost. The Sports Exhaust does a good job of making it sound the part too, though it has to defer to the Range Rover's frankly outrageous racket on this regard. The any which way permutations of the various Sport, Sport Plus, suspension, gearshift and other modes are frankly a little bewildering compared with the Range Rover's simpler twist dial. Once you find your optimum setting it's flatter and more tied down than the Range Rover but also lacks its sense of flow.

Both make great use of their shared eight-speed automatic gearbox too, slurring about when needed but also able to deliver as crisp an impression of a paddle-shifted manual as you'd ever need in a car like this.

Look for a used Porsche Cayenne Turbo S in the classifieds!

By conventional measures neither of these cars is especially likeable. In their own ways they both astonish in their application of technology to overcome the inherent shortcomings in their size, weight and centre of gravity. For all their different characters they also settle on comparable solutions to the problem too.

Then the history of the SUV is written the Cayenne will arguably have as significant a part to play as the original Range Rover. A Porsche masquerading as an off-roader still feels like a bit of a novelty though. And for all its genre-defining success when it faces about the most dynamically accomplished Range Rovers yet built it suddenly looks out of its comfort zone.

The Porsche is the faster vehicle, capable of lapping the 'ring 15 seconds faster than the SVR if such things matter. It's the one that feels more like a car and less like a 4x4. Its interior wins out on quality and opulence, if not its slightly fussy style. But for all its ability it's less engaging, arguably still fighting the contradiction of sports car in an SUV body the Range Rover will never have to face and considerably more expensive too. And the fact the SVR runs the Cayenne so close dynamically without seemingly compromising the mud-plugging credentials gives it credibility to match the charisma.