Heard of the Sports 800? Possibly not, but it's officially Toyota's first sports car and stakes a claim on the GT 86 bloodline

The PR battle to claim the heart and soul of the car formerly known as the Toyobaru is taking to the showrooms.

Just what is it though

? After driving the BRZ I'd have said "definitely a Subaru", from its flat-four cough on start-up onwards. 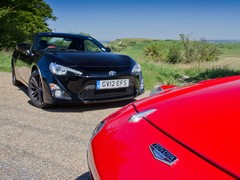 Does this answer the identity crisis?

Definitely a Subaru, too, when you open the bonnet and clock the two hastily applied Toyota badges on the wings that lift with little persuasion and reveal 'Subaru' stamped into the bodywork. A little provocation from Fuji Heavy Industries at Toyota's expense, one could speculate.

Does it really matter though? Ultimately not really - the BRZ and GT 86 are, minor suspension and styling differences aside, more or less identical. So the choice really comes down to brand loyalties, availability and the finer details of the spec sheet. All that stuff that's been said about a return to affordable rear-wheel drive fun, an emphasis on handling over outright pace and a more relevant approach to performance motoring rings true, twice over. 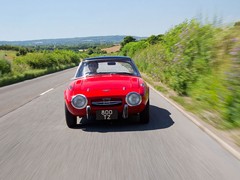 And then this little car turned up. It's a Sports 800, apparently Toyota's first real sports car and one I'd never heard of before 'Mr GT 86' Tetsuya Tada dropped it into conversation

at the Geneva show

earlier in the year. Sure, the famous 'Hachi Roku'

and its iconic drift heritage (yo) play a part in Toyota's claim on the GT 86. But the Sports 800 suddenly gives Toyota a marketing friendly joker to play, this compact, rear-drive, back-to-basics coupe powered, crucially, by a horizontally opposed engine. Bingo! PR gold ... if only there was one here in the UK.

Whose badge is it anyway?
Turns out there is, and it belongs to JHW Classics, a firm specialising in supplying exotic and rare vehicles to film and TV production companies. And PH, on occasion (curator Jane Weitzmann provided the Miura for our Lamborghini features a couple of months back). 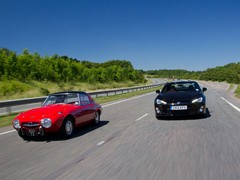 One nil to Toyota in PR battle with Subaru

It was on that visit I chanced upon the Sports 800, Jane perhaps surprised that I'd bound past the Miura, XJ220 and others to gawp at a Toyota with a 790cc two-cylinder engine. Or then again perhaps not given that the fleet includes a number of other Japanese rarities, including a 2000 GT, Nissan Fairlady ZG (a rare, re-nosed and rally-homologated JDM 240Z), Mazda Cosmo and Honda N600.

The contrast with with the Miura we saw last time couldn't be more dramatic and when I hear the Sports 800 being manoeuvred round I have to stifle a giggle. It really does sound a bit like a lawnmower. Looks cute as you like though, kind of a miniature 2000 GT and the very image of a classic 60s sporting coupe. Just half the size. 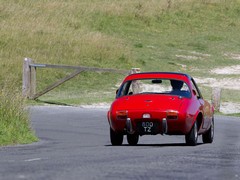 Half the size, twice the fun

It's a lovely little thing though, half a metre longer than a (proper) Mini at 3,580mm but similar in width and weighing just 580kg. The tall roofline does spoil the scale effect slightly but this is a proper little car, not a novelty like the Peel. And the view from within along a louvred bonnet and behind an oh-so-60s skinny-rimmed steering wheel and Spartan aluminium dash really does make you feel like you're in a mini E-Type. An illusion spoiled slightly by the fact it shivers on tickover like a dog on a frosty morning walk and has an engine note that's more 2CV than Porsche 550 Spyder.

The novelty and charm win you over though and for all its diminutive proportions it doesn't feel quite so comedic inside. OK, it's not for the larger of frame, but nor does it feel like you're driving a kids' pedal car. There's a chunky precision to the controls too, the stubby little gear lever requiring surprising muscle and the non-assisted steering - proud 'T' at the centre of the wheel - hefty enough at low speeds. 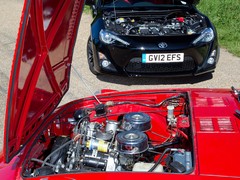 Breathing through a carb on each cylinder, the flat twin is not the last word in NVH but it picks up purposefully and the Sports 800 takes off up the road with real spirit, GT 86 following in its wake. A mix of imperial measurements on the minor gauges and km/h on the speedo is quirky, the numbers on the latter seemingly more like scale speed, rather than actual. Hence when the needle passes three figures you're holding on and grinning like it was mph.

Scale speed
60-70mph is about what the Sports 800 is comfortable buzzing along at and, clearly, the M25 is not its forte. So I peel off and onto some more appropriately sized lanes where Caterham-like width and sightlines are more of an advantage and just 49hp less of a hindrance. It's a hoot too, thrashy, buzzy and noisy but eager and chuckable and fun to punt along so long as you keep that tiny gearstick busy in an attempt to make meaningful progress. 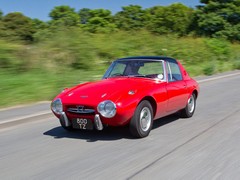 At no point does it ever feel quick. But, you know, there's more to life sometimes and the novelty and sheer fun of the Sports 800 is endlessly charming.

Scale it up and put it into a modern context and, yes, the GT 86 does contrive a similar sense of innocent fun. Compared with the exposed metal of the Sports 800 the GT 86 feels relatively decadent in its luxury but for a modern car it's pleasingly pared back. And evocative of an earlier time.

No, not the 60s. Think late 80s or early 90s. Yup, if you've been raised on a diet of MX-5s, Evos, Celicas, Imprezas or Type Rs you'll feel right at home here, right down to the crummy digital clock. 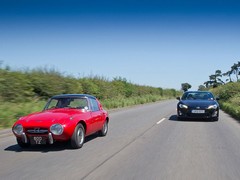 "Noddy called and wants his car back" etc

Get your foot in and stop moaning

Those who've moaned about the lack of poke, thrummy noise or supposed lack of throttle adjustability need to spend more time north of 5,000rpm. Sure, it's no rocketship and there are more exciting sounding engines about. But it's just quick enough to entertain, sings a more vigorous tune and is happy to throw some shapes if you so desire. All at vaguely sensible speeds. Pin-sharp, rewarding and, most of all, tremendous fun.

Is it the true successor to the Sports 800? Sure, you can draw parallels. But this pairing is no pure bloodline like a 911. Just a bit of fun, an unexpected opportunity inspired by a PR-friendly soundbite from Tada-san and a chance to appreciate the fact, yes, Toyota can let its hair down from time to time (with a little help from Subaru).

With thanks to JHW Classics, photos by SBMotoPhoto