Just like an R1... only smaller and missing a few cylinders

"The supersport market is significant again." These words, spoken confidently by a Yamaha man at the R3 press conference, will bring joy to many riders' hearts. During the recession, sportsbikes had it quite hard, but this now appears a thing of the past. OK, the supersport 600 market is still pretty stagnant, but just this year we have seen the brand new Yamaha YZF-R1, updated BMW S1000RR and Ducati 1299 Panigale as well as the Kawasaki H2 all released. Yamaha actually says that behind the MT family, supersports are its next best selling range. However there are a few issues - price, insurance, the usual aspects that mean few riders over a certain age can afford a new sportsbike. Thanks to Asia, help is at hand. 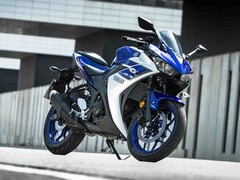 The growing Asian markets has created a new class of sportsbike that, conveniently, fits in with Europe's confusing new licence scheme. Machines such as the Kawasaki Ninja 300, KTM RC 390 and Honda CBR300R are seen in these sectors as a superbike and that spells big money to the manufacturers. Hence we have we have recently seen the influx of this cool new breed of sportsbike and now Yamaha has got in on the action with the new YZF-R3.

Parallel power
Confusingly, the R3 has a 320 logo on its fairing and is actually 321cc, but we will brush over this for now. And the fact it is a 250 in Asia! It is powered by a brand new parallel twin dohc engine that makes a claimed 42hp with 22lb ft of torque, thanks to technology borrowed from other R-series bikes. The motor has a 180-degree crank with a balancer shaft, downdraft intakes and off-set cylinders inside which run forged aluminum pistons on a DiASil coating. Pretty trick considering the bike costs £4,799. Although there are budgetary concessions. Unlike the YZF-R125 the forks are conventional rather than inverted, the frame a steel tube rather than a steel beam and the brakes, although ABS, are sliding calipers rather than radial. But overall, you have to say the R3 is a bit of a looker. And at a quick glance it could be an R1. If you squint... 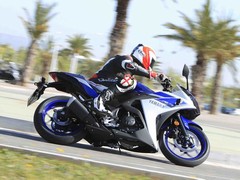 You can't see it but Jon is smiling. A lot.

While at a passing glance the R3 could be mistaken for an R1, once the engine is fired up you are left in no doubt. Despite certainly not being too farty, it's not an R1 crossplane. While that's no surprise, what will make you raise an eyebrow is its performance. We aren't talking supersport levels of go here, but the R3 is actually really good fun to ride. The throttle response has been tailored to be nice and progressive, the engine is super smooth with a pleasing vibration near the top end and it's very sprightly. I saw over 100mph on the clock and had a few revs to go, which isn't bad at all. It's more than capable of keeping up with traffic and overtaking cars with no terrifying 'is there enough power?' overtake moments. Add to this a light clutch, slick gearbox and on the road it's a very pleasant bike. Those restricted to an A2-licence, or just looking for a relaxing, light and fun bike with a low seat height will love the R3. Even more so when they start to explore its handing potential.

Giggle factory
Yamaha let us loose both on the road and track at the R3's launch and I was really surprised how competent it was at both disciplines. On the road the soft suspension made for a very relaxed ride while the chassis gave a great deal of confidence in the front end. When I felt like being an idiot I could get my knee down, but generally I just enjoyed the Yamaha's nimble handling through the Spanish bends. At over six feet I was worried about being cramped, but the R3 has that 'big bike' feel Yamaha pioneered in the YZF-R125 and I was really comfortable. Then we hit the track. 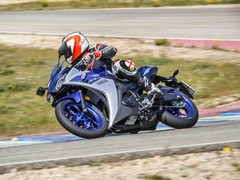 To be honest, I thought a spell on track would overwhelm the R3. How wrong you can be... OK, the two-piston sliding calipers felt a little spongy when pushed hard (the lever's span is unadjustable), but the ABS was excellent and the suspension very competent. Despite lacking adjustment aside from shock spring preload, and being very soft as standard, the R3's bouncy bits weren't too bouncy. We did two 20-minute track sessions where the Yamaha was basically thrashed to within an inch of its life and I don't remember giggling or enjoying a track session that much for years. There is no denying it was a bit soft under braking, but what you do expect? Yes, the R1 and R1M are impressive, but there is a certain joy in hammering the crap out of a small bike and feeling like you are a Moto3 rider. Just a few stone heavier...

Some A2 riders will take the option of restricting a bigger bike, and fair play to them it's probably a better long term plan. But if you want a great looking, light machine that is fun and certainly not intimidating, then the R3 is a better buy than the Ninja as well as cheaper and more practical than the KTM. It's probably not quite as adept as the KTM when you are going bananas, but ultimately that's not really what the bike is about and it would be hard to split them without riding them back-to-back. However, I suspect the Yamaha will sell better in the UK thanks to Yamaha's dealer network.