Do you want your bike to offer your riding advice?

It's certainly been a strange old week for two-wheeled news, so PH2 will kick off with one of the more interesting stories. Kawasaki has confirmed that it is moving forward with plans to introduce what it calls ICT (Information and Communication Technology) including Artificial Intelligence (AI) into its future bikes. Slightly worryingly, according to Kawasaki the technology is aimed to pick up on the rider's intent and emotional state to allow the bike and rider to share an understanding of purpose. Kawasaki then goes on to elaborate that the system will "be able to offer the rider pertinent hints for enhanced riding enjoyment or relay safety-related or reassuring advice as the situation dictates". Really? The whole point of riding a bike is that you don't have someone nagging in your ear! It will be interesting to see how this technology evolves beyond relaying simple GPS directions. 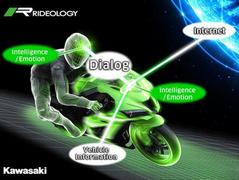 Does this look like a good view of the future?

Onto more topical news and Yamaha has released a

hinting that, despite popular opinion, it feels that the supersport class is far from dead. Honda is generally believed to be stopping production of the CBR600RR at the end of this year due to the worldwide collapse of supersport sales, but this video hints that Yamaha will be bringing out a revised YZF-R6 for 2017. Very little information can be gleaned from the vid, but the engine certainly screams like a 600, with a conventional and not crossplane firing order, so expect the R6 to receive a more aggressive R1-style fairing and small engine tweaks to make it Euro 4 compliant. In more 2017 new model news, a few pictures have been leaked on Twitter (search for Sandro Rubinic) showing what is claimed to be the eagerly anticipated 2017 Honda Fireblade during a PR shoot. That's the good news; the bad news is that the images appear to show it is far more of a facelift than the expected total revision and the engine, frame and wheels look identical to the current models'. Expect the major updates to be to the bike's electronics with traction control, variable fuel maps and ride-by-wire technology added to a revised engine beneath a new sharper style of fairing.

Finally, you have to chuckle at this video of a Dominos pizza delivery rider showing off on Clapham High Street that has been doing the rounds on social media. Apparently his bosses have taken a very dim view of this rider's antics, so not only did the wheelie end in an epic fail, he is probably looking for a new career to boot... However, if he needs a spot of wheelie advice, then he should head out to the Isle of Man as trials legend Dougie Lampkin will be attempting to wheelie all the way around the 37-mile TT course this Saturday. If you want to watch the attempt live, go to Redbull.tv and keep your fingers crossed for Dougie!