Seemingly a fag paper apart on the spec sheet, has BMW put enough air between its two M cars?

I've just got back from the UK launch for the BMW M2 in, er, Spain. If it makes you feel any better the weather was authentically British. And we were in RHD cars too. If you're still feeling envious direct your green-eyed gaze at Matt, who got to drive it 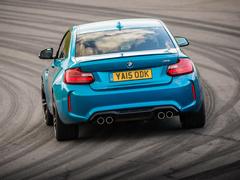 We did drive it on the road. Honest

All of our driving was on the road. From the perspective of a man with many miles

this was a revealing experience. After all, if there's a criticism of the M2 it's that it potentially makes its much more expensive big brother look a little silly. It's a

too; the M4 has a decent wedge more power at 431hp and 406lb ft to the M2's 370hp and 343lb ft, plus the additional tech and much fancier 'proper' M-developed twin-turbo engine would appear to make the M4's £12,985 premium seem worthwhile. If that doesn't do it the M4's carbon strut brace looks dead fancy too.

Then that pesky real world kicks in. Our M4 long-termer was a £74K with options; the more limited range of extras on the M2 meant all the UK-spec cars I saw were well under £50K as driven, even those with the £2,645 M DCT gearbox. £13K premium easily becomes £20K then. And how much of that extra performance potential of the M4 can you actually appreciate day to day? They're both limited to 155mph (well, officially) and, relevant beyond pub/forum bragging or not, an M4 is only a couple of tenths quicker to 62mph. 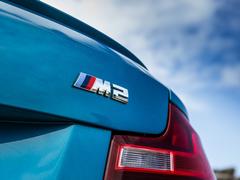 Another new M-car name to get used to!

From the perspective of an M4 'owner' (indulge me the fantasy) I think I'd feel comfortable with that premium though. More on my impressions of the M2 to follow but for the added complexity and character of the engine alone the M4 is more of-a-piece performance product than appealingly hot-rodded base car.

And that's the heart of it really. When I attended the original M3/M4 launch I was struck at how thoroughly engineered that car is; from front bumper to bootlid it bristles with bespoke parts and has the sense of a car developed as a complete package. It also feels much, much faster. The M2 is quick enough, the M4 possibly a little too much at times. And that's what I like about it - there's a ferocity in the upper reaches of the M4 that puts it in a very different league. Whether you get to use it is another matter of course.

And those awaiting delivery of an M2? They're winners too. For those put off by the M4's configurable complexity it seemingly gets the best of that car's engineering - the diff, the bespoke suspension components, the brakes - while dumping the gimmicks. This also gives the M2 a big enough gap over the M235i. 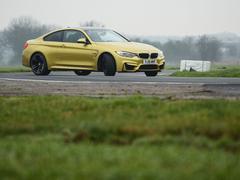 Costlier, yes, but it does have advantages

The character differences are notable on the road too. Because of the stupid auto-blipping function I was forced - forced - to drive the manual M2 with DSC fully off, this sitting on the 'wrong' side of the car and on bumpy, rain-soaked Spanish roads. And not once did it feel it was going to kill me. Would I have done the same in an M4? Probably not - I'll save it for the roadtest to explain why but as you'll know from my long-term reports driving an M4 at pace is something that you build up to, with a resulting greater sense of satisfaction. The M2 is a car anyone can jump in and drive to the limit within just a few miles. I'd be interested to spend equivalent time in one to see if the novelty wears off inverse to the way the M4's improves with time.

So, a clean sweep for the M2 and further PH fawning over its purist credentials assured then? There is an elephant in the room. And it's got a V8 engine and significantly lower price tag...