Mark Hales on Technique: Shifting the weight about

In the first of a new column, Mark Hales discusses weight management in pre-aero race cars 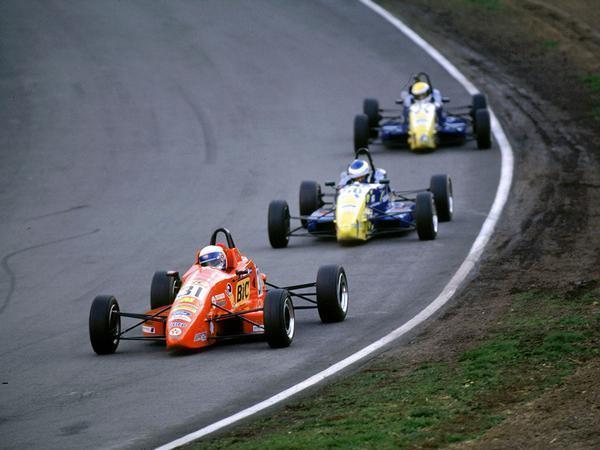 Somebody asked me again the other day. Why do I like racing old cars? An oft-posed question for which I have a ready answer. It's partly because I get to drive something that was at the top of the pile when it was current. A session behind the wheel of

once handled by Fangio is the equivalent of lapping in Hamilton's Mercedes. Times have changed and so has the technology, not to mention the money, but the analogy is still relevant. The other reason I like old cars is that the designers had yet to dabble with the science of grip, the stick to the road that comes from slick tyres, and especially, aerodynamics like wings, tunnels, diffusers and the like. The effects of which are invisible and, initially, hard to manage. A downforce car gives you very little tactile information because it has to be stiff enough to withstand the downward pressure without being pushed to the ground, and in most cases, the suspension will not have any droop travel either. This is simply the ability for the wheels to drop down when the chassis rises (or the wheels fall into a dip in the road) and it is because aerodynamicists want to stop air getting under the car and lifting it. That would reduce the weight pushing the tyres to the ground and reduce the grip. 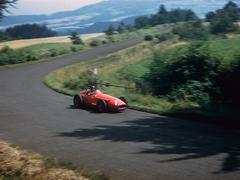 Having mentioned weight, the driver of an older - i.e. non-downforce-equipped car - is still in a position to influence its effective weight distribution simply by using the steering, accelerator and brakes. An accessible instance of this done to perfection was (and still is) available most weekends of the season in the Formula Ford 1600 category, which for so many years was the training ground for anybody and everybody that aspired to any kind of professional career on the circuits. Formula Ford was a basic racing car, with a Cortina engine and Hewland gearbox in the back, the driver lying down in the middle and skinny wheels and tyres at each corner. It was where Ayrton Senna and Emerson Fittipaldi, Nigel Mansell and all the greats began their careers. Formula Ford dates from the 1960s so it is also a blueprint for a great many historic racers.

Formula Ford has always been fantastically competitive and picking apart the optimum technique could take a whole book, but let's just study how a driver uses the brakes - which results in the largest amount of weight transfer - and how the car is designed to let them optimise that. The power is relatively limited (and in theory, everybody has a similar 105hp or thereabouts) and there is no limited-slip differential to prevent the wheels spinning. If a driver encounters even a tiny bit of wheel spin, the loss of drive is akin to backing off the accelerator and three people will tow past down the next straight. So the car designers would engineer as much grip into the back end as possible. 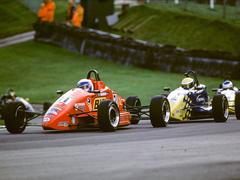 If you're fast in Formula Ford...

The weight distribution would also be arranged to favour this as far as the regulations would allow (although there is only so much you can rearrange with a gearbox, engine and driver inside a certain length), the camber and castor, anti squat and anti dive would all be configured to keep the tyres in as much contact with the road as possible and to do whatever made them work most effectively. The springs and dampers would be as supple as possible to do likewise while still controlling the body.

There would then be a trade off with the front end. It would need to be firm enough in order to stop the car rolling (and affecting the back end) but not so much that the car pushes wide (or understeers) whatever the driver does. Invariably though, the designer would accept some understeer, because it allowed a good guy to keep his foot in it. When the tail slides, you can control it so far, but eventually, you have to lift off.

The same good guys then developed a technique which was to take a load of speed deep into the turn and squeeze the brakes very firmly, then ease the wheel gently towards the apex. As the weight shifted forwards the front tyres gained some extra grip, the car lost its tendency to understeer and pitched around its nose. The trick was to thump the accelerator to the floor at exactly the right moment, sit the weight back on the rear wheels while catching the incipient slide with the slightest dab of opposite lock - before straightening up the steering and letting the drift carry them around the turn. As always, it is the timing that is the key and in this instance, it was beautiful to watch at the top level. 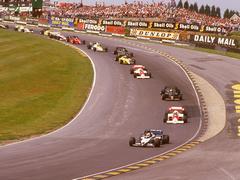 ... you should be fast in anything!

The Sennas of the world would approach, say, Paddock Hill Bend, in a line, sweeping up and across the gradient to the crest, then one by one in a kind of synchronised dance, the cars would appear not to turn so much as perform a corkscrew motion about their axis. The nose would go down, the tail would come up and they would appear to swivel around a point somewhere in the middle of the car. Then came the crack as the power went back on. Same point every time, one after another, like a fusillade. The cars would formation drift in a snake, curving round the line, each of them yawing at an angle of no more than 10 degrees. It was perfect choreography.

The best efforts seemed to have almost no steering lock applied one way or the other, sweeping round the corner as if guided from outside; but every so often one would pitch the car too hard and the driver would need to whizz the wheel to the left and hold a lurid slide against the power. Then you could hear a slight rise in the revs as the extra body roll picked some more weight from the inside wheel which lost a little of its grip. The rising revs were simply because the driver had kept his foot firmly clamped to the bulkhead but inevitably the one behind would gain by half a car and try and stick a nose alongside up into Druids. 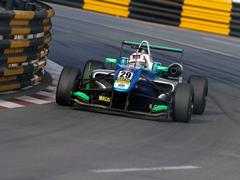 Some would fail to use the braking energy sufficiently to pitch the car firmly enough, and you'd see the touch of understeer which washed them wide and over the kerb on the way down the hill. Paddock has been tightened since Senna's time but the gravel trap has recently been moved back close to the tarmac so too wide here once again carries its own stony penalty. A trip over the shallow kerb in between usually loses a touch less speed than the oversteering alternative though and most are able to get back to the track proper and still keep their position.

We are of course talking hundredths here, which is why Formula Ford was such a great category, although the irony of developing the technique essential to success was that victorious exponents who graduated to Formula 3 then had to unlearn it all. Once it was equipped with slicks and wings, the Formula 3 car had most of the point-at-the-front engineered in the workshop and the driver absolutely had to avoid any slip or slide and keep the airflow running as straight as possible under the car and over the wings. 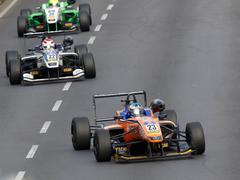 You can still spot the weight moving sometimes...

A Formula Ford might be the plan for a great many cars that came before and after but it is deliberately a minimal concept. Light and simple, it leaves as much up to the driver as possible which is one reason it was such a brilliant training category. Wings and aerodynamic devices are the things that have since complicated the issue. Extra weight is pressed on the tyres from the passage of the air and will exert an influence over the car at a different point and in a completely different manner as the speed rises; the centre of pressure and the centre of gravity are usually in different places along the car. Because such downward pressure is effectively free (or at least any performance gain from the extra grip is usually greater than the loss of speed through drag) almost every aspect of chassis performance in modern professional motor sport tends to be sacrificed towards aerodynamics.

The option to load up the tyres under the brakes and to alter the balance of the car with the accelerator, though, are still options that remain open to the driver; but these days they tend to have discussions with the engineers as to where it is likely to work best, when and by how much. The result is harder for the watcher to pick out than it was with our choreographed snake at Paddock Hill too, but if you watch the in-car Formula 1 you can see the little clues which give the lie to what the driver is trying to do. The aerodynamics of these cars confer a level of grip which allows a Raikkonen or Bottas to seek out a completely different piece of road to any which Clark or Fangio might have used but the sudden twitch of reverse lock on the entry to a hairpin is simply because they have got the timing slightly wrong. 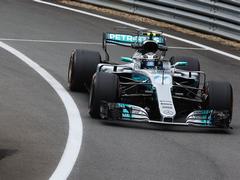 The weight transfer from braking makes the fronts stick that little bit more, while the rears are unloaded a little extra but the arrival of the car at the corner and the application of steering lock to guide it towards the apex are all slightly out of sync. The tail skips out of line and the lap is ruined. The car, of course, is travelling that much quicker towards the corner than in days of yore, so deciding when to apply the brakes such that the speed is exactly right when you get to the hairpin is critical to a nanosecond or less. The stuff of a sixth sense. It is what sorts the very best from the merely good - and it always has been - but the difference between these and the older cars is that the grip comes from the science and it has to be exactly right in order to work. If it's not, even the best in the world cannot compensate.

Older cars allowed more improvisation from the driver. A better chance to optimise things like weight transfer from the cockpit. It was what allowed Fangio to take 12 seconds from the Nurburgring lap record on three successive tours to unlap himself and win a race that looked lost, saying afterwards, "I believe that on that day in 1957 I finally managed to master the Nurburgring, making those leaps in the dark on those curves where I had never before had the courage to push things so far." He had simply made the decision to try a different combination of speed, brakes and steering input, and the car responded. Fangio stalked a different planet, but at least I know what he meant. It's why I like racing old motors...

To read more from Mark, see the 'Archive' section on his website.