The Defender bows out in some style with the Heritage car; PH takes a farewell drive

It won't have escaped your attention that the Land Rover Defender isn't long for this world. The latest emissions regulations mean the old stager just isn't efficient enough for the 21st century and production will cease early in 2016. There's no option of one more update with one more engine; it's going for good. 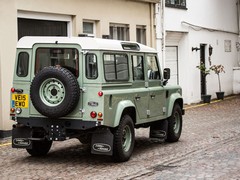 But while Defender fans will be solemn that such an icon is dying, Land Rover is smiling. Not only can it now focus on properly developing a replacement, but the run out

have been increasingly sought after. The Heritage, Adventure and Autobiography were all released earlier this year and a mad scramble to place a deposit ensued. The last cars, each representing a different pillar of Defender success, built by Land Rover and not an aftermarket company, were always going to be in demand.

The Heritage is definitely the best of the three. We've not driven the other two but it just is. Not only was it the most affordable of the three to buy, it's arguably the most Defendery of the three. Simple, honest, unadorned. Well, apart from some green trim. 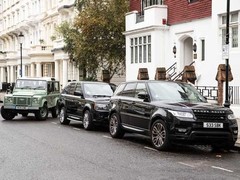 The march of progress!

The Grasmere Green colour is perfect in fact, encapsulating the era of classic Landies while still appearing quite fresh because it's unusual. For the trendy types that fawn over Defenders at present it will be perfect. Apart from the smattering of green plastic inside, which looks odd.

Colour aside this is as Defenders always have been, with everything good and bad that that entails. For drivers coming from a modern SUV they will be in for a shock. Some of the surprise will be good (the amount of glass you can see out of and the way people actually like your car) and the rest pretty bad. The driving position is atrocious, the clutch is heavy, the brakes are wooden and the steering very vague on the road. Fans will staunchly defend its single-mindedness, off-road ability and the inherent compromises, but there's no escaping the Defender feels of another age on the road. Those who don't 'get' Defenders will find nothing new to sway their opinions here. 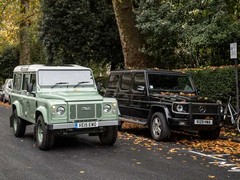 It's hard work in normal traffic. Ben will tell you soon in a separate story how great it is off-road (the pics below should give you some clue!) but everyday it's rather a chore. Given how many are now seen in various city centres that's a relevant observation, or at least more than it was. This is suffering for style, right?

And it does look fantastic, particularly mooching round Kensington streets amongst the murdered out Range Rovers, tacky X6s and the like. Narrow too, making it far wieldier than you might expect. As those SUVs try harder and harder to command attention, the Defender has that timeless, effortless cool brought about by years of icon status. It makes you feel good to be in, sad and vain though that may sound.

A Defender is about the adventure too, even on the road. Taking photos at Queensgate Mews, we bump into a friendly old gent admiring from afar. He tells us his Defender looked near identical to the Heritage, only it had a straight six and took him across India in 1969. What other car could that have happened in? Everyone has a Defender story, and that's what makes them legendary. 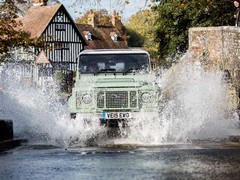 So even as very far from the Defender's biggest fan, it isn't hard to see where the appeal lies. The utilitarian nature, the lack of pretence (that's, er, excluding the Autobiography) and the go-anywhere ability are what its reputation is built on and what it will be so fondly remembered for. In a world of faux 4x4s, of butch facades covering quite ordinary underpinnings, to have an off-roader pretending to be nothing more is endearing.

With a classic look and the historical significance of the Heritage Edition, these will surely be highly coveted in years to come. That they were relatively affordable to purchase must make the owners even happier about their new car. While the Defender replacement will certainly be more capable, more efficient and safer, it will be doing very well to win over as many fans as this one. Farewell old chum.