We liked the standard Fiat 124 Spider as a road car - can the Abarth version cut the mustard on track? 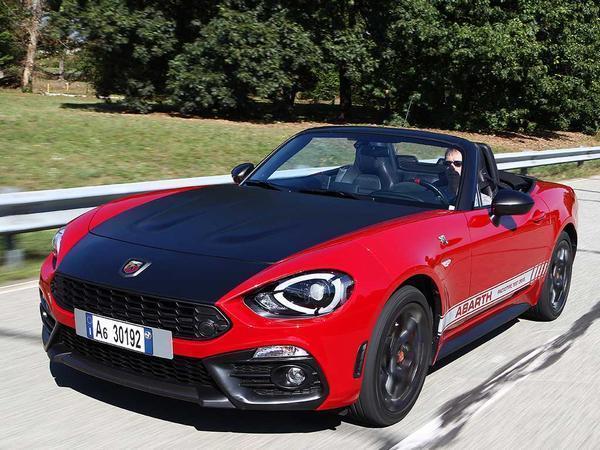 but prefer the way the naturally-aspirated Mazda MX-5 drives. But what's the score if you have more power on offer?

We've just posted our video review demonstrating how effective an MX-5 with a bit of a power boost from tuner BBR can be. Now it's the turn of the power-enriched, sharper-handling Abarth 124 Spider. For pretty much the same money as the BBR - £29,565 - it's an interesting comparison.

The Abarth starts with a power disadvantage: at 170hp, it's some 30hp shy of the BBR. But then it is making do with a boggo 1.4 MultiAir turbo engine from the Alfa Mito/Giulietta. 170hp isn't even as much as the older 180hp 1.4 T-Jet engine in the 595 Competizione but in the Abarth line-up the Spider ranks beneath the 595. So much for the internal politics; it's now approaching the power levels we've been craving. Does it make use of it properly on the track? 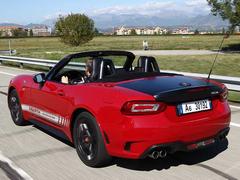 On the outskirts of Turin is a little-known Fiat facility called Orbassano. These days, it's Fiat's safety testing centre but they've opened up the track for us to have a play in the new Abarth 124 Spider. Turns out sleepy Orbassano isn't used much these days. The banked oval has a gritty, gnarly surface that's peppered with bumps. Unnervingly, a pair of nesting herons is disturbed as we approach. A nervous-looking PR man says something about keeping our speed down. This isn't looking promising.

Then Maurizio, the man who looks after Abarth's historic car collection, turns up in Verini's 1975 title-winning Fiat 124 Abarth Rally and starts doing doughnuts. I think we'll be alright.

Stick-on graphics on our car (painted 'Costa Brava 1972 Red' with a matt black bonnet and boot lid) declare it to be a prototype but we're assured it's production-spec in every way.

Having just been to the Abarth factory at nearby Mirafiori, it's been forced home just how much 124 DNA comes from the Mazda MX-5. The base structure is shipped in direct from Hiroshima, before being clothed in Abarth panels in Italy, as well as receiving engine, gearbox, steering, suspension and trim. Sit inside the car and it feels almost pure Mazda, except for the unique seats (rather lovely, if a little unsupportive for track use) and some swathes of Alcantara. 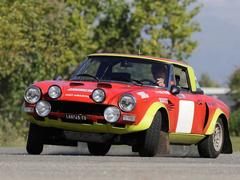 As soon as I fire the Abarth up, it's clear some genuine petrolheads have been at it. The Record Monza exhaust sounds fantastic - so much more charismatic than the Fiat 124's - and that's just at idle. As the revs rise, so does its fruitiness, while on each gearchange scintillating pops fire out of the back. Few four-cylinder sports cars sound this good.

One really big difference over the MX-5 is the power delivery from the turbo engine. If you're a high-rev fiend, you may well be disappointed, though. The redline is set at 6,600rpm but there's little point in exploring the upper reaches, since most of the torque is well down the rev range. On the road, the performance is diesel car accessible but on track I find myself missing the raw thrill of extracting the max out of the rev range. It's not as if turbo lag is absent, either. Drop much below 2,500rpm and it takes some time for the turbo to spool up again. Carrying speed around the track is a challenge of holding it in the sweet spot of the rev range: not too high, not too low.

For the record, the 170hp and 184b ft figures enable Abarth to claim a top speed of 145mph and 0-62mph in 6.8 seconds. As for the six-speed manual gearbox (don't even think about choosing automatic), it has a superbly sited lever with short shifts, a crisp action and an excellent choice of ratios. 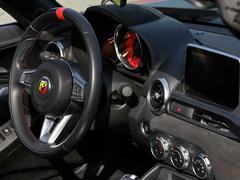 Twist in the tail

It's not just the engine and gearbox ratios that are specific to the Abarth. Compared to the Fiat 124 Spider, the Abarth has tauter Bilstein dampers, stiffer springs, firmer anti-roll bars and extra bracing, as well as unique steering settings and Brembo brakes.

Not that the Abarth feels dramatically different to begin with, even when you flick the Sport toggle in the centre console (the Fiat lacks this button). Sport mode opens up a valve in the exhaust to give it an even fruitier sound, sharpens the throttle response, relaxes the stability control and adds weight to the electric steering. Speaking of which, this is one of the better electric systems we've encountered, being well weighted and progressive in feel.

The real difference is felt when you attack some bends. In contrast to the Fiat 124 Spiderwith its open diff, the Abarth's mechanical differential makes it much feistier on the throttle in corners, enabling you to exploit its extra power as you hit each apex.

My first attempt at provoking the rear end to step sideways does, well, nothing. The front end digs in and the traction control engages understeer mode. I try a bit harder and the rear end starts to break away in a predictable manner, but only when you disengage the traction control do you really get the benefits of the 50/50 weight distribution. Now the 205/45 R17 Bridgestone Potenzas break traction very easily, with slides that are equally straightforward to correct.

The Abarth distinguishes itself from the MX-5 in another area, too: the brakes. Red Brembo four-pot calipers certainly look the part, with the 280mm vented front discs and solid rears working extremely well in such a lightweight car. 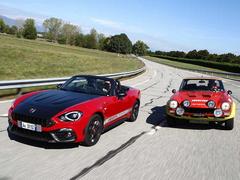 An extra seven grand on top of a similar-spec Fiat 124 Spider might seem a lot to pay for an extra 30hp. But the Abarth is so much more than a mere power boost: it looks better, sounds better and has by far the best cabin of the MX-5/124 family.

As a track car, the Abarth is certainly loads more fun than the Fiat, thanks to its extra power, firmer suspension and that entertaining limited-slip diff. But in truth, its natural role is not as a circuit tool; while the Fiat 124's body roll has been reined in, there's insufficient power to exploit things to the max. The Abarth feels like it's more suited to tussling with German grand tourers like the Audi TT, BMW Z4 and Mercedes SLC.

Just how well does it compare with these machines and its Mazda twin on UK roads, though? We'll be finding out soon enough...