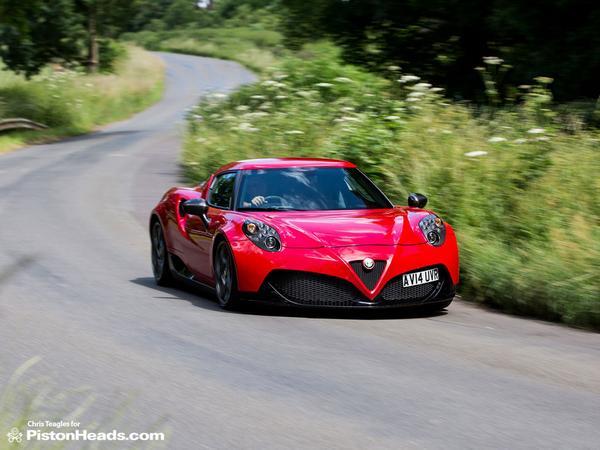 Is it possible to turn the

into a full-on supercar?

thinks so, giving it more power, more carbon bodywork and suspension mods. Has this UK-based tuner succeeded in turning the

Let's face it, the press hasn't always been 100 per cent positive about the Alfa Romeo 4C. In this car do we have the answer to all that criticism? I'd venture we have.

Jamie Porter at AlfaWorks (the performance arm of Royston-based Alfa Workshop) thinks he's realised this potential after spending the best part of a year developing his fast road/track junior supercar. It's evolved through numerous stages - which I've been testing over the last few months - and the final package is now ready. Ladies and gentlefolk: here's the AlfaWorks GT4C. 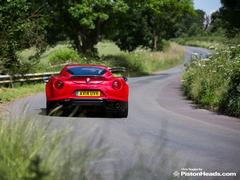 Same but more so

: to squeeze the maximum out of fundamentally one of the best mid-engined blank canvases around. The words 'best' and '4C' are not always uttered in the same sentence, particularly when it comes to the steering. But as AlfaWorks proves, it's eminently possible to improve the 4C's steering.

The GT4C package has three main pillars: new lightweight carbon aero bodywork, extra beef in the engine and tweaks to the suspension.

The GT4C certainly looks far more muscular; thanks the cornucopia of carbon kit for that. The changes are pretty obvious as they're mostly picked out in gloss black paint on the demo car; no doubt many owners will prefer naked carbon. There's a new front bumper/splitter that projects forwards to increase downforce. New sills incorporate an air intake to cool the gearbox on the left-hand side and the engine on the other. The rear bumper features a gigantic new diffuser, too, while a carbon fibre bootlid and rear spoiler are in development.

The new panelwork shaves 20kg off the overall weight. It'll also shave a full £8,000 off your wallet if you buy it individually, but it comes as standard on the GT4C. 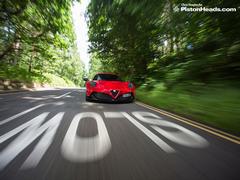 That the GT4C is now Very Quick Indeed is beyond doubt, but at first you don't notice it. My first 'moment' was glancing down at the speedo and thinking 'that can't be right'. I even asked Jamie if it was calibrated correctly. The response came: yes, it's reading right.

Perhaps there should be no surprise at how quick the GT4C is (for the record, around 3.7 seconds to 60mph, or nearly half a second faster than standard). With an extra 40hp on tap (280hp) and 30kg less weight to haul around, the GT4C is knocking on 300hp per tonne. It was always going to be fast. But its speed is just so easy and accessible, partly thanks to torque raised from 258lb ft at 2,200rpm to 310lb ft at 2,700rpm.

The main change is an ECU remap, which also has the benefit of sharpening up the throttle response. The other big difference is a Quicksilver-developed straight-through stainless steel exhaust system that uses two different-diameter pipes. You notice the aural difference straightaway: there's a deep, throaty burble at idle, extending to a grin-inducing growl as the revs rise. Anyone who's driven a 4C with the optional Racing exhaust system knows what a complete pain it is at motorway speeds - literally. AlfaWorks has fitted a Helmholtz resonator that completely eliminates the drone (it's removable if you want to do a track day, by the way). Weighing just 6kg, the system also comes with neat carbon tailpipe tips. 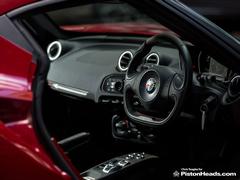 Now we're down to the area where the GT4C must deliver: cornering. Every 4C owner is familiar with the way the car can twitch under braking, follow ruts in the roads and move in surprising directions over bumpy surfaces. Some owners even use the language of horror movies to describe the experience.

AlfaWorks has tried out hundreds of suspension system tweaks. What it's found is that very small changes have very big effects. For instance, the most the geometry has ever been altered at the front end is 4mm but the changes in feel are huge.

The GT4C has a full set of Ohlins dampers adjustable for compression, rebound and height; you also get front-end spacers and shims, plus cross-axis bushes at the rear. Also present are OZ Alleggerita HLT wheels (7.5x17 front, 8.5x18 rear) that weigh 10kg a set less than the standard 4C's, while Toyo Proxes R888R rubber is the default choice of fast road/track machinery.

The GT4C immediately feels like a totally different animal to the regular 4C. With relatively soft road settings applied, there's zero twitchiness and fidget in the steering wheel, just a crisply linear turn-in, with far more feel for what the helm is doing. Getting rid of the sense that the steering wheel might kick back at any moment is the single greatest achievement of the GT4C. It gives you the confidence to push hard - very hard, in fact. The solidity and crispness are clear from a lane-switch test: haul hard on the helm at speed and the front end simply obeys, with no hesitation or lurching.

Another big plus: grip levels and high-speed stability are massive. The GT4C is at its best on fast sweeping bends, where it just sticks and sticks up to quite eyebrow-raising speeds. In low-speed corners, it does still understeer but the transition to power oversteer is far more predictable and more comfortable to provoke.

It's simple to tailor the set-up to suit your individual requirements. I've driven four different set-ups now and I've been really struck by how the tiniest changes make big differences to the handling and steering feel. For example, keeping the profile of the tyres standard makes the steering smooth but a little inert at the dead-ahead; switching to lower-profile tyres really sharpens things up. Setting the Ohlins to 'race' mode stiffens the ride dramatically but makes the steering every bit as immediate and direct as the very best from the classic era of Lotus and Porsche. 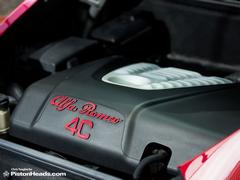 If you can live without the carbon body panels, just doing the suspension mods is enough to transform the 4C. For just a few hundred pounds, the handling and steering feel can be elevated utterly; small wonder that Alfa Workshop has now become a Mecca for owners.

The 4C has even more potential. AlfaWorks is planning an even more extreme track/motorsport version with a full roll cage, race seats and carbon-ceramic brakes. There's a lot more to come from the engine, too: it's working on a hybrid turbo that should be good for 335bhp, as well as a 2.0-litre Touring Car-spec engine with up to 400hp, which should be something spectacular. But even as it stands now, the GT4C has the ability to match, and possibly even beat, the very best junior supercars.