PH flies south for the winter (and the new 8 Series) 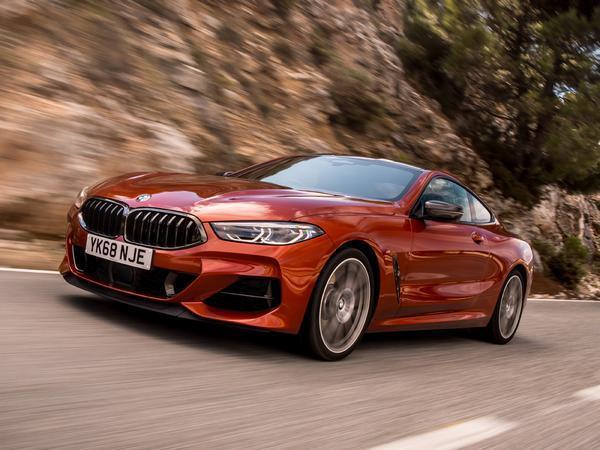 The BMW 8 Series; a striking two-door coupe, offering luxury performance at a significantly higher price point the outgoing 6 Series, which it has usurped as the brand's premier GT offering. It's available with a range of 4.0- to 5.6-litre V8 and V12 petrol engines, the most potent of which (found in the range-topping CSI) puts out 380hp and 410lb ft via a six-speed manual transmission and the rear wheels only.

Sounds pretty good, doesn't it? About as appealing as it must have done back 1992, at least, when it was last true. As they say, though - they, in this case, being BMW's corporate overlords - the more things change, the more they stay the same, so here we are over a quarter of a century later with a new 8 Series deposing a discontinued 6, at a substantially higher price point and with more 'premium' ambitions.

The new model is available in two forms at launch; the diesel 840d, powered by a 3.0-litre twin-turbo inline six producing 320hp, and petrol M850i, which receives a 4.4-litre V8 putting out 530hp. Until the M8 and Gran Coupe arrive it's the sportiest and most expensive variant of BMW's flagship model. Essentially, it should represent the best BMW you can buy (although that very much depends what you're looking for).

We got our first taste of the 8 Series on the full launch just a month ago. Foreign launches are rarely a good indicator of a car's UK performance however; the superior roads, nicer weather and friendlier people tending to paint a car in an overly generous light. A domestic event is a much better benchmark, there being no substitute for the combination of potholed tarmac, unerring drizzle and average speed cameras when it comes to focusing the mind.

This is a premium product though, for premium people, and you may have noticed that the weather isn't the best here at this time of year. With that in mind, BMW is hosting the UK launch in the fairest corner of our United Kingdom: Andalusia. The test route takes in the mountain roads around Ronda and Jimena de la Frontera, which could be argued to resemble the A4061 if you've never seen it, though the quality of the surface is certainly comparable, and in fact reveals plenty about the cars we're there to drive.

We start in the diesel, but don't sneer, because though it may not be a V8 or V12, the 840d's surfeit of torque sees it hit 62mph eight tenths of a second sooner than that 850 CSI of yore. This despite Munich pitching it as the most comfort-focussed of the line up, with more time dedicated to highlighting its new premium interior and revised 'BMW Operating System 7.0' infotainment system than to discussing its dynamic prowess.

With good reason, too. The interior borrows heavily from the 7 Series to ensure suitably plush surroundings, with a full leather-wrapped dash and new 'Crafted Clarity' glass gear shifter and drive select buttons making it feel a step above other BMWs in look and feel. The iDrive name, meanwhile, has been ditched to reflect the new system's spread from the centre screen to the digital dash and head-up display, where it now offers a far wider range of personalisation, as well as noticeably improved functionality - including Apple CarPlay and Tesla-style remote updates as standard for the first time.

As a place to be, it's sublime, even if it doesn't quite reach the same levels as a car to drive. While the six-cylinder does a good job of disguising its diesel nature, even going so far as to sound pretty smooth, in this application it isn't a powerplant that could exactly be described as compelling. For bursts of speed during overtaking or should the occasional urge to bury your right foot take you, it'll prove more than capable, but it's at its best when maintaining a steady cruise. Perhaps Alpina will have something to offer in that regard...

There are other areas where it could do with their intervention, too. Even at more sensible speeds, it's hard to escape the crashy ride in Sport mode and overly springy one in Comfort, broken or undulating surfaces seeming to push the suspension beyond its comfort zone. This is thanks to the fact that, though a great deal of the car is constructed from aluminium - with carbon roof and other addenda optional - it's impossible to completely escape the 840d's 1,905kg mass. Even with the available four-wheel steering it's not what you'd call nimble, further cementing its place as an eminently competent but dynamically limited grand tourer.

Despite these shortcomings, BMW expects a roughly 50/50 split between the two launch models when it comes to UK sales, the 840d's near-£25k saving versus the M850i doing more than enough to make it an equally viable option. That petrol V8 is the car we've had experience of already, and unsurprisingly it's much the same now as it was then. Driving it back to back with the diesel does perhaps throw its qualities into sharper relief, however, the extra 210hp offered up by the V8 making as much of a difference as one might expect.

The test cars are specced with BMW's optional Adaptive M Suspension Professional too, which, while not at the level of the competition in the upper echelons of this segment, does a far better job of evening out the ride and maintaining cornering composure than the standard setup. This, combined with the engine's extra grunt and remastered soundtrack, transforms the 8 Series into a car which, even on the windier of the mountain roads we encounter, now encourages you to carry extra momentum through the corners and turn more sharply into the bends.

It's not only objectively a better car, but feels closer the 8 Series as it was intended to be: a comfortable, luxurious grand tourer that can hold its own should your route diverge from the beaten path. As an opening act for the newly resurrected model, it's very strong indeed, but there's certainly more to come; consider our appetites for next year's M8 thoroughly whetted.