The difference a set of dampers makes is revealed on the first corner out of the village where AC Schnitzer's UK operation is based. An uphill left hander leading up to the gate of the Sandringham Estate, it's got a nasty washboard ripple just as the chassis loads up and a fresh coating of December rain on its surface. I've already done several runs for the camera in the Schnitzer-tuned

so have a good sense for how it deals with it; waving farewell and tackling the same corner in the stock

I instantly get a blaze of yellow flashing lights on the dash and a violent intervention from the stability control. 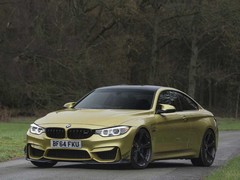 DSC is on top of it. But it's exactly the sort of thing that happens all the time in the standard M4 on roads like this, shaking your confidence and more often than not causing you to back off and leave the real talents of the rest of the car untapped. Which, let's face it, is something of a waste.

Earlier in the day in the Schnitzer car it's a completely different story. The apparently stanced ride height, bigger 20-inch wheels, wafer thin sidewalls and boosted 510hp engine all suggest a car that's basically an M4 but more so. In other words the last thing you want for exploring unfamiliar B-roads in the middle of winter. Backwards through a hedge would be embarrassing. Backwards through the walls surrounding her majesty's winter residence possibly treasonous, with the added concern the local constabulary are likely better armed than your typical village bobbies. 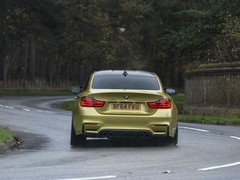 Bumpy, wet roads really show this car at its best

from the BMW's S55 twin-turbo straight six. 431hp becomes 510hp, 406lb ft now 475lb ft. As a piggyback unit the original ECU is left untouched, meaning Schnitzer can warranty both its own components and the original engine and transmission against tuning related faults for up to three years. Where graphs climb steeply, plateau suddenly and remain flat until the cutout on the stock car they now continue to expand into a more fulsome and expansive range. Fine if you want it but never in the five months I've enjoyed with the M4 have I thought 'what this car REALLY needs is more power'.

Noise, on the other hand, has been a more controversial issue. Schnitzer's demo car has the Active Sound Design still intact but, frankly, it's drowned out by the export only cat-back exhaust system. This retains the variable flaps of the standard one but amplifies the 'real' noise considerably, to the point you can pretty much play tunes by messing about with loading the engine in a high gear and suddenly back off to create characterful ripples and crackles. The demo also gets some expensive carbon trim elements which you could probably take or leave, especially the plank-like rear wing offered but not fitted to this car. 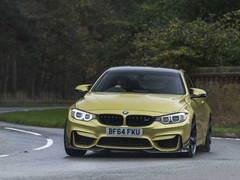 Faster, louder and quite a bit better too

What I'm really here to try out is the AC Schnitzer RS suspension kit, based around a

apparently "better fast than hard" when it comes to tuning springs and dampers.

And for all the slammed looks the Schnitzer M4 lives up to this promise. The regular M4 is very good on smooth, dry surfaces, where the sublime calibration between DSC, M diff and DCT gearbox are more than up to the job of containing the more rampant side of its initial power delivery. When the going gets choppier though you can't escape the sense there's more spring than there is damping, the staccato variation in tyre contact pressure over bumps meaning on wet, bumpy B-roads you get a lot of very early DSC intervention. It's not always as destabilising as you might imagine. But you have to think carefully about which suspension mode you're in - you might want Comfort to take the sting off the bumps but that can leave the rear axle dangerously underdamped if you hit a bump with any vigour. And yet in Sport or Sport Plus it's just too damned stiff, the result being the same heart in mouth flashes of DSC as the black boxes do their best to tame what feels at times like a wildly bucking bronco. 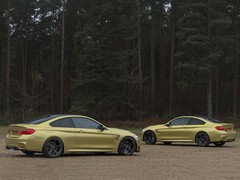 Schnitzer shows M4 can be improved

No such insecurities with the passive Schnitzer set-up - there's only one setting and it's the right one. At low speeds it feels generally similar to the stock car, which is to say pretty fierce and with plenty of secondary pitter-patter. As the speeds increase though it calms down considerably, harsh vertical impacts successfully damped, keeping the rear tyres' contact with the road more constant and predictable. As a result there's less need for DSC intervention, you can fully enjoy the engine's huge reach and the car feels calmer and more settled throughout. You get the odd skerff of tyre rub through really violent dips - Schnitzer UK's Chris Rossiter admits they're considering winding on a little more compression damping to counter it - but where the standard car gets flung about by the undulations the Schnitzer car glides, wheels tracking the surface imperfections with fluidity and confidence.

All of which means you can enjoy more of that engine, more of the time. Conditions and a sense of social responsibility limit exactly how deeply you can explore 510hp on a wet country road but even at sensible speeds you sense the increased flexibility and muscularity. With the room to fully explore the extra performance there's little doubt this M4 would be a pretty mighty car. Interestingly this is the first M4 we've driven on the standard steel brakes too and they both look and feel well up to the job, with just a little more feel to the initial pedal bite. They lack the bling factor of the PH Fleet car's ceramics but if you're weighing up your options you could pretty much have the Schnitzer engine upgrade and suspension kit for the £6,250 BMW charges for them.

Such is the beauty of aftermarket updates like this - you can tune the car according to need, taste and budget. And were the PH Fleet M4 mine I'd happily take the suspension kit alone and drive home a very happy man.