Embargo is off, story is live - PH review of the new Ferrari 488 GTB right here! 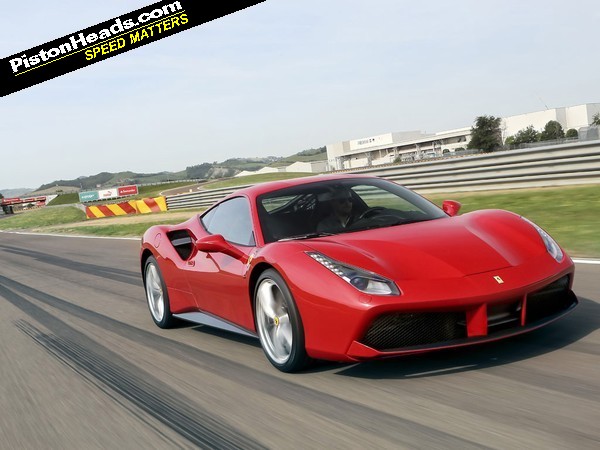 3,304 words; of the many impressive numbers relating to the new

this is the total frantically speed-typed into my laptop during the technical briefing the PR boss jokes is a precondition for being able to drive the car. This with significant periods staring, baffled, at graphs while wishing I'd listened more at school. Rather than doodling pictures of Ferraris. 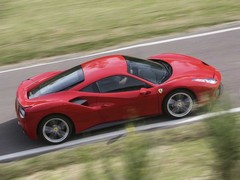 And here's the thing. The 488 GTB is a car of astonishing technical complexity, the product of some incredibly impressive number crunching by some very clever people. Aimed directly at your inner child. The one that spent double maths daydreaming about driving bright red sports cars that make loads of noise and go really fast.

A diligent journalist would attempt to make sense of technical information he doesn't necessarily understand and pick out some statistics he thinks sound impressive for an audience probably not that interested anyway. Because, really, all we want to know is just how fast the 488 GTB? And does it make as good a noise as the 458 Italia? Before we get to that let's try for some stat-enhanced context though.

Fear of progress
Recent experience of the 288 GTO (you knew it was coming!) helps. 30-odd years ago nobody seemed threatened by the idea of two turbos and a downsized V8, the sheer outrageousness of the GTO's performance and the F40 it spawned the stuff of legend. Yet now forced induction is seen as a threat. 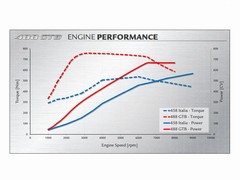 One graph worth looking at; check the torque 'curve'

Then there are the unapologetically aggressive looks, including that visual reference to the 288. Always in the eye of the beholder, there's no escaping that gaping double decked side vent, even when driving. Yes, there it is in the mirror!

458 facelift or all-new car then? It shares a roof and glasshouse with the outgoing car and the basic proportions are undeniably familiar, as is the cabin; weight is 10kg less at 1,370kg dry with undisclosed 'lightweight options'. Aero takes a significant step forward, a double-decker front splitter directing air over bigger radiators and to the underside where curved vortex generators send low-pressure air to the rear. In 'DRS' mode (indicated on the dash) a flap lowers on the underside to bypass the diffuser and reduce drag while 'base bleed' air ducted from the top half of the intakes exits beside the lights to reduce the drag created by the blown rear wing. Even door handles improve flow to the intercoolers. Overall downforce is increased by 50 per cent compared to a 458 with over 200kg at 125mph; aero efficiency shows comparable improvements. 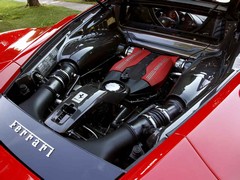 Darling, did you boil wash my V8?

The 100hp gain over the outgoing Italia is eye catching but it's the jump in torque from the 458's 398lb ft to 560lb ft you really need to digest. One reason it's two seconds faster than an Italia round Fiorano and half a second faster than a Speciale, despite weighing 80kg more than the latter and being on standard tyres. And the 8.3 seconds to 200km/h is 2.1 seconds faster than the 458 (and a token tenth quicker than a

If these improvements weren't enough Ferrari even claims that in comparable situations on track you're only actually using 520 of the 458's 570hp. Whereas in the 488 you're always in the powerband and getting the full 670. Applying Maranello logic, the power gain is actually more like 150hp. Protesting too much in an attempt to marginalise the atmo engine die-hards? Perhaps. Certainly this inspired the focus on eradicating turbo lag, low inertia titanium-aluminium turbines spinning within ball bearing twin-scroll IHI turbos fed by paired, equal length headers for faster spool-up.

It's all about response. Predictably Ferrari has graphs to prove it, suggesting identical pick-up in third gear to the naturally-aspirated V8. Specific output has leapt from 127hp/litre to 172hp/litre too, a convenient 1hp/litre more than the 650S. But die-hards will notice the way the 488's engorged power curve plateaus from around 6,500rpm to the 8K redline while the 458's keeps climbing steadily all the way to the 9,000rpm cutout. 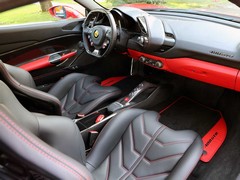 Cabin will be familiar to 458 owners

Bringing us to sound and sensation. Frankly have flat-plane Ferrari V8s ever really sounded that good? Perhaps a couple of generations ago but the direct-injection 458's binary switch from thrummy low revs to 'look at me!' hysteria was always a little clumsy. Ferrari has worked hard on the noise but - correctly - harder still on replicating that snappy feel to the throttle those raised on 360s, 430s and 458s will know and love. At the very extremes the normally aspirated engines still have a more natural feel, the turbo motor fighting back with the sheer impact of its punch and an exotic range of whooshes and whistles on top of the ever-present blare.

The engine itself shares a block - if not much else - with that of the California T, that car's clever management of torque through the gears a dry run for the main event here in the 488. First to third use the same shallower torque curve, fourth, fifth and sixth progressively steeper and all capped to 516lb ft. Meaning you only get the full 560lb ft in seventh, not that you're ever left feeling short changed. This isn't just about avoiding destabilising torque spikes; it also allows Ferrari to stack the gear ratios nice and close to keep things feeling lively. 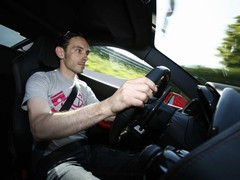 Cheer up Dan, you're driving a Ferrari!

And lively they most definitely feel. Unlike AMG and others Ferrari hasn't tried to hide the forced induction; the whooshes, gurgles and overwhelming rush of boost are clearly detectable. Inescapable in fact. But there is never a moment when the V8 feels caught off guard. On boost a McLaren feels similarly explosive. But by the time the 650S has spooled up the 488 will have several lengths on it. Or at least that's how it feels. And the way it picks up speed is never anything less than astonishing, to the extent you genuinely need to recalibrate braking points and turn-in speeds.

Fundamentalist
All of this would be naff-all use if you couldn't put it to the road. And here the 488 pairs fundamentally sound, 458-derived underpinnings (wheelbase and front track are the same, tyre sizes as per the Speciale) with next-gen electronics. So you get the familiar fast, hydraulically assisted steering with lovely weighting and response, strong, dependable brakes and brilliantly matched springs and active magneto rheological dampers. Now integrated into an updated version of the Speciale's Side Slip Control and working with the F1-Trac active diff and stability control, varying the damper forces front to back to counter under- and oversteer as required. 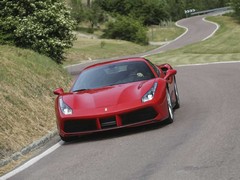 Fast on the track, devastating on the road

The beauty of having strong foundations is that the electronics only really need intervene at the extremes. Leaving you to marvel at the ability to dive into the corner and plant your foot safe in the knowledge as much of that 670hp as possible will fire you out the other side. Things can be made progressively more exciting with every twist of the Manettino, your confidence growing to the point you think Esc Off might be a fun way to really explore what the 488 can do.

Fragile of self-confidence or lacking in driving talent? You're better off leaving it in Race and keeping Ferrari's entourage of ego-massaging support systems close at hand. Because left in a room alone with the 488 it suddenly becomes much, much scarier company. 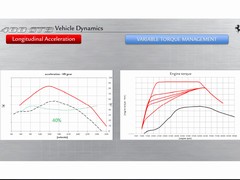 Bespoke torque delivery for each gear is key

At nine tenths or even 9.9 the 488 feels utterly predictable and on your side; the beautifully direct steering, natural balance, faithful front end, lightning fast damping and snappy throttle response all flattering your inputs with just enough breathing space for some thinking time too. Dampers decoupled into 'bumpy road' with Sport or Race on the Manettino it's supple and agile, capable of deploying full bore acceleration over horrendous surfaces without so much as a shimmy. The damping is beautiful - lithe, responsive but totally in control - and the stability systems all quietly mop up after you. Like all Ferraris it makes ballistic pace feel easy, without forgetting the sensory stuff that makes it exciting too.

Special mention to the gearbox here; it's based on the same Getrag dual-clutch as the 458 but has been significantly reworked. It's now so much faster that if you hold the downshift paddle on corner approach the gearbox can downshift through four ratios in the same time it took the 458 to do three. It's still more fun clicking your way through them individually, savouring each snap of shift and flare of revs. 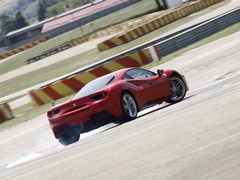 Things can get quite hairy quite quickly

It's therefore all too easy to kid yourself you've got the god-like skills to easily cope with 670hp and no driver aids. When, in reality, the 488 GTB with everything off will readily prove you mere mortal.

There isn't that scary sense of lingering boost as you back out of it like you'd have in old-school turbos. But if you've deliberately provoked the car you have to be aware the power comes on with increasing intensity. And it's harder to balance on the throttle as a result. Basically if you've pulled the pin you'd better be ready for the explosion to follow.

This is good though. This level of performance shouldn't be completely sanitised. It should bloody well be exciting. And though the whole package impresses it's the sheer giddy speed of the 488 that sticks with you long after you've hung up the keys. 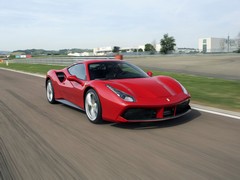 'Facelift' or not this is a big moment for Ferrari, and for the cars the 488 GTB competes with. The first post-Montezemolo car, the first new-age turbo Berlinetta, another massive leap in performance and a pumping up of the visual aggression. The

flies the flag for the normally aspirated old-school, the 675LT will surely give it a proper run for its money on the tech and performance. But on this showing the Ferrari arguably beats Lamborghini on the emotive stuff and McLaren on the appliance of science. The bar has been set very, very high.

Through all this it doesn't forget its core objectives. Speed. Noise. Ability to distract from maths lessons. And most of all fun. Of all the f-words associated with this new Ferrari that's the one that counts.

A slightly tentative lap of Fiorano...