Has turbocharging ruined the 911?

Technology inevitably marches on; 991.II Carrera S offers a chance to see if it's trampled the 911 into the ground

gets a major technological boot up the backside you'll get a lot of wailing and gnashing of teeth about it losing its soul. If there'd been internet forums in 1969 they'd have probably been full of people saying how extending the wheelbase in the name of improved stability was sacrilege. Widebody flared arches? A disgusting manifestation of fat tyres and grip over finely balanced adjustability. Whale tail rear wings? Real men don't need downforce. Reference also power steering, ABS, traction control, water cooled engines, electric steering and - now - 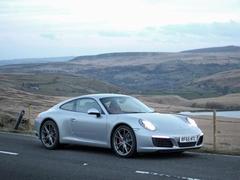 Certainly familiar as a 911 from here

The steering may not be as communicative as it once was, the handling quirks have been all but erased and it's now socially acceptable to buy a 911 with only two pedals and an automated gearbox. But is the 911-turbo-that-isn't-a-911-Turbo the final line in the sand? After all, for all those technological improvements listed above the Carrera's flat-six howl has survived intact until now.

And there is a risk the Carrera could end up little more than a 911-shaped car, bereft of actual 911 characteristics. At which point we all mutter into our beards and head off into the classifieds in search of the next big thing in appreciating rear-engined assets.

The incremental way in which new technology has been applied to the 911 inspires intense scrutiny for each major evolutionary step. Is THIS the moment Porsche jumps the shark? Or was it the shift to electric steering? The 996's fried egg headlights? Four-wheel drive? Impact bumpers? Coil sprung suspension? Everyone has an opinion, the only shared one being nobody can quite agree what the sweet spot is, was or will be. 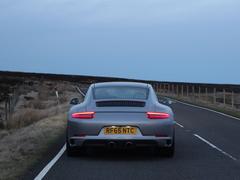 But this is a big emotional change, especially for long-standing and/or serial 911 owners. And could mark the point they drive to the dealership to try the newest-latest version and think 'you know what, I'll stick with what I've got, ta.'

Let's consider why. The bucket of bolts tickover, gruff low-rev bark, razor sharp throttle and thrilling transition into trademark flat-six howl has been a 911 constant. The outgoing car demands determination to fully exploit this, not fully showing its hand until that switchover to the searing second half of the rev range.

In a pattern repeated in all of the technological advances applied to the 911, turbos lower the threshold for exploiting the car's talents. The rush of excitement that once required at least 4,000rpm on the rev counter now needs only half that. The commitment required to rev the normally aspirated engine out to its best is replaced by instant gratification, at the cost of some of the satisfaction from working for your thrills.

Is the 911 a lesser car for that? Forced induction is something all performance icons are having to deal with. Even with a heritage of building turbocharged 911s for 40-odd years this is still apparently big news for Porsche. 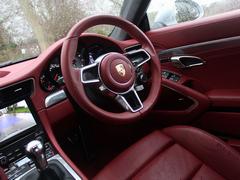 If a test drive in this car were your first ever taste of a 911 you'd probably be very happy. It looks like the 911 you always promised yourself. If the dealer has done the sensible thing and specced it with the optional £1,773 Sports Exhaust - two centrally mounted chrome pipes rather than the stock quad ones - it'll sound like one too, gruff and growly at idle and responding eagerly to first blip of the throttle. With the windows open you might just catch the sound of the induction air hissing and the whine of the turbos but the traditional bass dominates.

The relatively conservative spec of the car you see here - an RRP of £85,857 to an OTR of £98,834 via that exhaust, the optional rear-axle steering at £1,530, £1,125 for Sport Chrono (including active engine mounts) and some very expensive seats - shows the Carrera S in a very flattering light too.

The weight, bite and response of the controls is all absolutely spot on, the manual gearbox helping claw back some purist points and permitting exploration of the 3.0-litre turbo's character. Throttle response is crisp, even without switching to the Sport or Sport Plus modes now accessible from a wheel-mounted rotary dial. Porsche held out longer than most with decluttered, switch-free steering wheels but it could only last for so long. 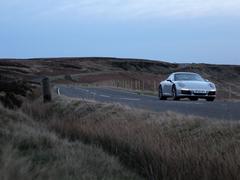 Doesn't rev quite like before, but heck is it fast

Switching back to the perspective of someone familiar with normally-aspirated Carreras and there is a little mush in the response to the throttle that wasn't there before. But this is countered by a kick in the back from low revs the outgoing car can't match and, frankly, will be expected by a generation of drivers raised on a diet of turbodiesels and forced induction hot hatches. Who won't know what they're missing in terms of throttle response or the thrill of high revs.

If nothing else this Carrera S reveals how carefully you need to spec a 911 these days. As proven in the GT3s, four-wheel steering conjures up a sense of the agility of older, more compact 911s within the engorged footprint of the 991. Now standard, the PASM dampers are tremendous too. In the stock setting they're fast enough to keep up with the pitter-patter of small, high-frequency bumps but with body control to spare for the big ones too. Stiffen them up by the button if you want but the default is so good you'll probably not bother after a few exploratory prods. Unlike the tied-down Boxster and Cayman there's just enough flow in the 911's chassis to reward at a fast road pace too. 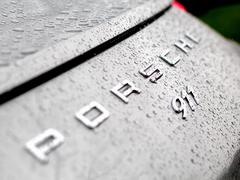 Different certainly, but don't worry too much

Better than the real thing?

But does this tech make it the genuine article or a skillfully crafted impression? There are worries, like the fact automatic downshift rev matching is now compulsory in all but the default mode. Want Sport or Sport Plus with sharper throttle and stiffer engine mounts? Forget heel'n'toe downshifts then; the car does it for you. Unless you go the whole hog and turn the PSM off in Sport Plus too. Which is dumb. Because if you're one of the diehard 25 per cent of 911 buyers still wanting to shift yourself the chances are you'll want to do it properly. Dumber still that in this age of configurability and custom driver modes you're not offered the choice of switching it off on your terms.

And it's the tiny details like this that'll underline fears turbocharging is just one manifestation of the Carrera moving away from its traditional audience. And becoming that 911-shaped parody discussed at the beginning of the story.

Then a brilliant bit of road unfolds, the fleeting chance to extend the engine is glimpsed and, yes, enough of the old magic remains to mark the 911 out as still something unique.

Pick your personal take on The Real Porsche 911 from the back catalogue by all means. The new ones in the showrooms have to move with the times though and the good news is, specced correctly, turbocharging hasn't ruined it. Entirely.