We hated the Huracan's 'dynamic' steering; does the standard passive set-up finally do the car justice?

Turns out I'm wrong. Not everybody loves a Lamborghini. Turning round in preparation for another run for the camera there's a chap in shorts with his hands on his hips. He motions for me to drop the window. "Why don't you just f**k off?" Trying to explain to an angry man that the bright green Lamborghini you're sitting in is all mouth and no trousers and, really, you've not been going as fast as it sounds turns out to be wasted breath. Not really surprising. Making a racket and attracting attention is the whole point of the thing. After threatening to call the police he shuffles off back to his house, shouting "A**ehole!" over his shoulder as he goes for good measure. The old dear pruning her roses over the way beams, as she has done each time I've passed. 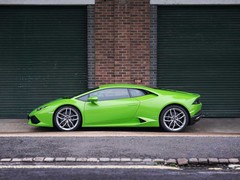 'Too conservative'? Really? Not from here

Order is restored. Nearly everybody loves a Lamborghini.

And that's the lovely thing about the Huracan. Other Italian supercar brands are available but from the driver's seat you'll find a 50/50 split between utter adulation and outright hatred. The Huracan is simply an amazing looking object though and the sheer wow factor of the looks somehow seems to transcend the blatant show-off factor. From ages nine to 90 the result is the same - childlike glee.

Known unknowns
So it looks fabulous in optional Verde Mantis paint and makes a lot of noise. Its normally aspirated V10 sniffs, snarls and howls and proves no matter how clever your turbo tech nothing beats a proper atmospheric supercar engine, the bananas charge from 5,000rpm to its 8,500rpm redline completely sensational. This much we already knew. But a chance to finally drive one with the standard passive steering was too good to pass up. 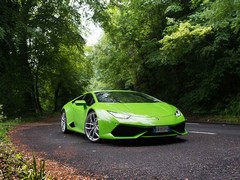 Huracan's case helped by a coat of lurid paint

had gained a version of the Huracan's optional Lamborghini Dynamic Steering was met with audible groans in the launch press conference for the new flagship Lambo. A development of

it varies the effective steering ratio anywhere between 9:1 and 17:1 according to speed, 'Anima' setting and, frankly, what the black boxes see fit. The theory is you can have light, fast geared steering to minimise arm twirling around town, opening up to a more relaxed ratio to avoid unwanted twitchiness at speed.

Unfortunately what it ultimately means is the relationship between steering wheel input and steering angle output is completely inconsistent, heightening the sense that the Huracan wants to push on through corners. Worse still it can actually 'correct' steering autonomously, fractionally unwinding the lock if it detects understeer in an unnerving sensation that feels like ... even more understeer. A 458 Italia's characteristically pointy steering makes the car feel super agile and alive while the McLaren 650S has that lovely sense of a front end you can lean against before playing with the balance on the throttle. Against these the LDS equipped Huracan feels inert, dumbed down and clumsy. 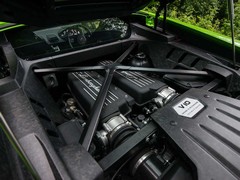 All show, no go

But who are we kidding? Lamborghinis are for posers, not drivers, right? Perhaps, but given how good the rest of the Huracan is it just seems a crying shame this vital point of contact between car and driver is so muddied.

Two lifelines are presented though.

Lamborghini has been listening and for the Aventador SV has played with the LDS to improve feel, meaning it now 'locks' the ratio once you've applied steering angle and doesn't have that horrible sense of slackening off mid-corner. And it actually makes the Aventador feel a lot more agile than before. To illustrate the point Lamborghini showed us a split screen of an Aventador going round the Karussell with and without LDS - in the standard car it was arms fully crossed and hang on tight against the kickback; in the SV a roll of the wrists and no scary wriggling around. 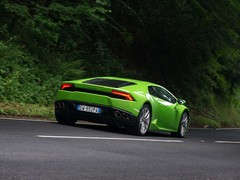 Try arguing it's not as fast as it sounds...

And on the Huracan it's an option. One we hadn't been able to try until this car arrived. Salvation at hand? Time to find out.

The 16.2:1 ratio is a pretty leisurely set-up compared with the hyperactive 11.9:1 of the 458 and its 488 GTB successor. There are clearly plenty of variables in that given these are two different cars with completely different steering geometries and front axles. But the point is there.

With nearly three turns lock to lock there is a bit more arm twirling at low speeds but in Strada mode it's so light it's not really an issue. That lack of feel is though, the Huracan now effectively fixed at the lazier end of the LDS system's spectrum. Low geared and (electrically) over-assisted? Yuck. 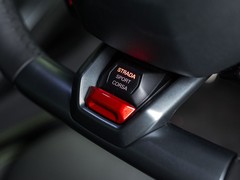 Things get better as you scroll up through the settings on the wheel-mounted Anima switch, as they do in general. Sport tightens up the optional magneto rheological dampers, sharpens the throttle, opens the exhaust and makes the gearchanges more decisive. It also adds a bit of weight to the wheel, which isn't the same as feel but a step in the right direction. For 'fast road' use it's probably the best all-round setting, even if the gearchanges are still a bit too smooth and it'll upshift automatically in manual mode just as your fingers were tensing on the blade-like upshift paddle. Bah!

So to Corsa and a whiff of the true Lambo mentalism you hoped was there. Frankly on all but choppy tarmac it's still pretty composed. There's a little kick in the back on gearchanges and if you don't compensate for the lag in the TFT rev counter and click the upshift paddle 500rpm before the 'needle' reaches the redline you'll bounce loudly off thelimiter. And incur the wrath of YouTube backseat drivers. 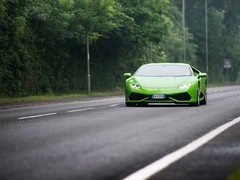 There's still not a huge amount of feel in the front end but you can at least sense the inherent neutral to understeer balance and predict - and adjust - the way the Huracan takes the corner accordingly. For all the wildness of the looks and fury of the engine's charge to the redline the car's set-up is conservative and pretty 'safe' but at least with the passive steering the messages you get from the wheel are consistent and honest.

If not transformed by leaving the box for Dynamic Steering unchecked the Huracan would appear to be much improved, with no impact on its ability to inspire your inner child or annoy intolerant, sweary NIMBYs. All of which has to be a result.