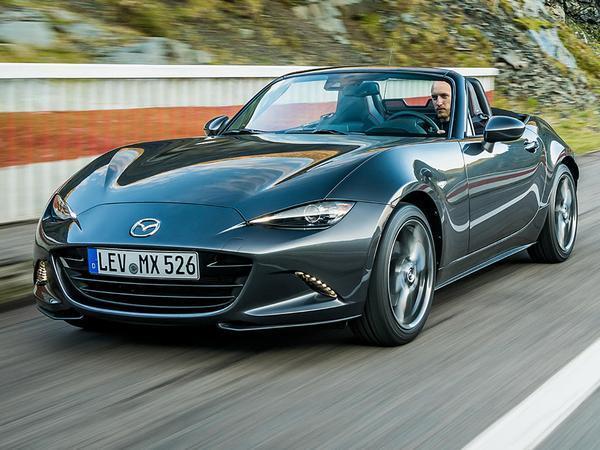 When it comes to sports cars priced under £30k, the Mk4 MX-5 is about as fun as it gets. But for the keenest drivers among us, the current engine options do hamper the excitement a bit. If you want a zingy, high-revving motor you'd likely opt for the entry 1.5-litre, but it produces just 131hp so isn't particularly quick. For those after a bit more power there's the 2.0-litre option which has a slightly more appropriate 158hp - only it doesn't have anywhere near the same keenness for revs.

What the MX-5 really needs then is a combination of the two - a high-revving and yet suitably powerful engine to make the most of that lightweight, rear-driven chassis. Thankfully, Mazda agrees. It now concedes that the larger SkyActiv-G unit was brought to market before it was completely optimised for the MX-5 because it was needed to satisfy demand in America. Now, with three additional years for development, the engine has been brought up to snuff for the model's first update, due in the UK next month.

The 2.0-litre motor now produces 184hp - an increase of 26hp - at 7,000rpm, fully 1000rpm higher than the old peak. It pulls all the way to its raised 7,500rpm soft limiter too, which is 700rpm higher than it could spin before. There's also been a gentle improvement in torque from 147lb ft to 151lb ft. Modest increases perhaps, but don't forget the soft-top weighs little more than a tonne - making the enhancements significant enough to reduce the 0-62mph time by eight tenths of a second.

That's important because there's a whole heap of difference between 7.3 seconds and 6.5, but it's also notable for the pleasingly typical way Mazda has gone about it. Each of the engine's four pistons and conrods is lighter (by 27g and 41g respectively), the crank has been redesigned and the intake throttle body is 28 per cent larger, while the port area is expanded by 18 per cent and the exhaust valve diameter has grown as well. There's a low inertia dual mass flywheel, too, for enhanced throttle response, while a different exhaust silencer gives the motor a slightly more spirited voice. In short, the engine is fed air quicker, spins faster and does a better job of letting you know how it's getting on. Sounds good, right?

Mazda thinks so, and went to the trouble of laying on the Transfagarasan Highway in Romania to prove it. The good news is the tweaked MX-5 remains as easy to get on top of as ever, and no less keen to engage the senses - primarily your fingertips and backside - as soon as you wind it up.

The seating position is still about 5cm higher than this 5ft 11 tester would like it, but the addition of telescopic steering rack adjustment (a first for the MX-5) means you no longer have to mimic an Egyptian mummy when reaching forward - a trait which improves the car's usability right out of the gate.

Can you feel the engine changes? Yes, very much so. There's an air of elasticity all the way through the rev band (it trundles along happily at 1300rpm), but it's the top end power that really entertains. Rev the nuts off it - to use the technical term - and there's a real sense of excitement about the way the needle climbs the rev counter, one which doesn't taper as it approaches the redline.

Where as the old, pre-update 2.0-litre would have begged for more shifts of the tight (and very satisfying to use) six-speed manual gearbox to stay on the boil, the stretched range of usability in the 184hp engine means that's it's possible to stay wedged in second for much of the technical route - adopting an elbows out driving style and really hustling the car into corners without the concern of hitting the limiter or bogging down on exits.

That being said, there's still not enough grunt for the car to be naturally throttle adjustable to the extent of, say, a Porsche 718 Boxster (no surprise there), but you can maintain gentle slides in the MX-5 once you learn its chassis' secrets. These include seesawing at its wheel as you power out of a tight turn to encourage the standard-fit (on the 2.0) slippy diff to send more torque to the inside wheel and, ahem, gentle kicks of the clutch, where circumstances allow.

Our test car, in European spec but roughly comparable to the UK-issue Sport Nav+, featured Bilstein dampers and a strut brace, both of which make a noticeable difference on the Transfagarasan Highway, which swiftly evolved from Autobahn smoothness to British B road over our 100-mile route. As before, there's ample suspension travel for the body accommodate big undulations, but it's also just about strict enough to prevent it feeling unstable or easy to unglue.

Considered alongside the car's quick responding front axle, we'd bet that the MX-5 is more content to glide over these surfaces than most hot hatches you'd care to think of. It's possible to argue against the two-seater's softer side, of course, but the Bilstein shocks feel about right for road use - or they did in Romania at any rate.

The brakes, now located behind 17in (standard on the 2.0) wheels with a different finish (anthracite or black) still look hilariously small, yet their performance is impressive and the pedal that controls them provides sufficient feel for you to modulate them effectively without leaning on the ABS. Of course, with the roof down, there is always the audible chirps coming from the Bridgestone Potenzas to signal when you're approaching the limit of adhesion.

When you've had enough of listening to that, Mazda now includes Apple CarPlay as an option for the car's rotary dial-operated infotainment system, which is useful if, like a large portion of MX-5 owners, you plan to drive it everyday. Wind noise is acceptable, too, with the hood up - although closing off the outside world does remind you just how cramped your immediate surroundings can feel after a good while spent in the cabin.

We had a short stint in the non-Bilstein equipped RF model, too - just long enough to remind us that the ride is even more supple without the trick dampers, albeit less hunkered down as a result, and that the added refinement of the folding hard-top is somewhat cancelled out by the enhanced buffeting created by the fixed back section of the roofline. (In conclusion, buy the soft-top.)

In broader conclusion, rejoice, because the latest MX-5 is the real deal: a proper back-to-basics sports car in its purest form. It was those things before - but the engine's enhanced spiritedness has finally nailed down the reputation. As ever, you'll have to make your peace with the tiny two-seat nature of the beast - and any number of hot hatches still walk away from the car on paper - but almost none of them enjoys the same iconic status as the MX-5. Now more than ever, the Mk4 owns it.