So we're not getting an R.S.16, but there remains plenty to recommend the plain old Trophy

Oh Renault, you horrible tease. Having got as far as allowing media to drive working R.S.16 prototypes, the

. It looked to have addressed the biggest criticisms of this fourth generation Clio R.S. - namely the lack of both a manual gearbox and some visual aggression - with a pugnacious, pumped up pocket rocket, ready to show the rest of the world that Renault Sport still had it. Now it's never going to happen. 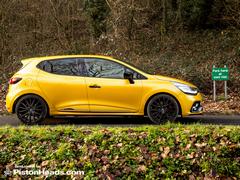 Frankly, the standard car would have required a price drop to somewhere around £12K for prospective buyers to really see a silver lining, and that wasn't going to happen. To have got so close and then be denied such a creation will probably only increase resentment to the standard car. And that fire didn't need any more stoking, did it? Imagine as a child your parents suggested a holiday to sunny Spain, showed you the brochure and told you about the plane, but you ended up in the same caravan as usual on cost grounds; whether you liked the caravan or not before, it's hard not to feel a little hard done by.

Alright, this isn't quite the same caravan, and that's harsh on what remains a very good hot hatch. Yes, despite what The Internet tells you. Even that Chris Harris off the TV liked it, remember. For its Phase 2 generation the Clio 220 Trophy gets an R.S.16 look (that car again) with new headlights and DRLs, plus some nattier wheel designs too. An Akrapovic exhaust, said to build on the lessons learnt from the Clio Who Must Not Be Named, is also optionally available and fitted here. 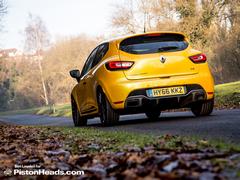 By and large it's the same Trophy though, which is a good thing. Alright, the gearbox still frustrates on occasion. Quelle surprise. Essentially you want to leave it in Race, which gives you decent manual control (it won't kickdown, and you can crash into the limiter as you please) with rapid shifts too. The auto modes are odd, the regular auto quite lazy and the Sport setting just too urgent, unnecessarily holding or seeking low gears even on relatively light throttle inputs. Weirdly the old Trophy didn't seem so awkward, though perhaps it shows how good alternative automatics have become.

However - and it is a significant however - this Clio remains properly good fun. Sat low in some excellent seats, guiding it with some light but accurate steering and flicking up and down the gears with those big metal pedals, the Trophy is very enjoyable. Indeed, and as has been discussed before, the Clio's chassis feels a bit smarter than the Fiesta ST; even as a firmer Trophy, the damping here always avoids the jarring nature of the Fiesta while controlling the body perhaps even more convincingly.

That £900 Akrapovic system makes a difference too. Predictable though it may sound, there's a distinct Megane impression to the noise, blaring through the revs, parping profusely on full throttle upshifts and even allowing for the odd overrun pop and crackle. Furthermore, the exhaust is only at its loudest with the gearbox in its Race mode, so there's all the more reason to keep it there. Otherwise the noise is a little dour. Turns all the driver aids off too... 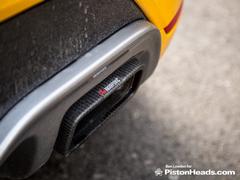 Drive the Trophy hard on a decent road and it's really hard to see where the criticism is coming from though. Sure, it no longer screams way past seven thousand anymore but then neither does a Fiesta, or a 208, or any of its rivals - this is the brave new turbo hot hatch world that we must face. The brakes are really strong, the gearbox will (mostly) give you last minute downchanges through its close ratios and the chassis is agile and tweakable. Whether you like the paddles or not, this Trophy remains a hoot in the right situation.

Trouble is, so are its rivals. The Peugeot Sport 208 brings a limited-slip diff that the Renault sometimes feels it needs, while the Fiesta of course offers such a lot of fun for so little money. It should be about to get even better too. Speaking of cost our test Clio came with a list price of £26,420, which is ridiculous.

However, as is often the way with these things, the list price only tells part of the story. Delivery mileage Trophys - albeit pre-facelift cars - are available at less than £17,000, which makes it far more competitive. The Peugeot and Ford remain more exciting hot hatches to us, though that doesn't leave the Clio a distant third - it's a genuine competitor for two great hot hatches. If you're looking at a new one then seek an example out with the Akrapovic, as it feels a worthwhile option, otherwise it's more than good enough. No really, it is.